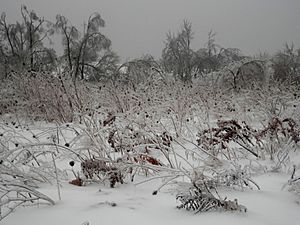 Ice storms are weather phenomena caused by freezing rain. The falling rain comes into contact with surfaces and turns into a thin sheet of ice. Ice storms cause accidents, take power lines down and cause serious damage.

The U.S. National Weather Service defines an ice storm as a storm which results in the accumulation of at least 0.25-inch (6.4 mm) of ice on exposed surfaces. From 1982 to 1994, ice storms were more common than blizzards and averaged 16 per year. They are generally not violent storms but instead are commonly perceived as gentle rains occurring at temperatures just below freezing. 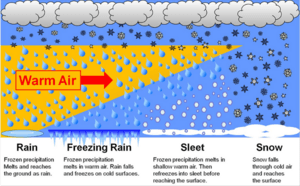 A graph showing the formation of different kinds of precipitation.

It starts with a layer of warmer (not freezing) air above a layer of sub-freezing temperatures lower down. Frozen precipitation melts to rain while falling into the warm air layer, and then begins to refreeze in the cold layer below. 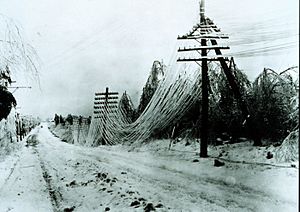 Power lines sagging after an ice storm. Besides disrupting transportation, ice storms can disrupt utilities by snapping lines and poles 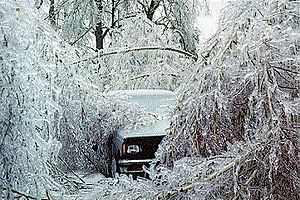 Devastation caused by an ice storm

The freezing rain from an ice storm covers everything with heavy, smooth glaze ice. In addition to hazardous driving or walking conditions, branches or even whole trees may break from the weight of ice. Falling branches can block roads, tear down power and telephone lines, and cause other damage. Even without falling trees and tree branches, the weight of the ice itself can easily snap power lines and also break and bring down power/utility poles; even electricity pylons with steel frames. This can leave people without power for anywhere from several days to a month. According to most meteorologists, just one quarter of an inch of ice accumulation can add about 500 pounds (230 kg) of weight per line span. Damage from ice storms is easily capable of shutting down entire metropolitan areas.

All content from Kiddle encyclopedia articles (including the article images and facts) can be freely used under Attribution-ShareAlike license, unless stated otherwise. Cite this article:
Ice storm Facts for Kids. Kiddle Encyclopedia.