Lynnwood is a city in Snohomish County, Washington, United States. The population was 36,485 at the 2010 census, making it the fourth largest in Snohomish County and thirtieth largest in Washington State. The city is a mix of urban, suburban, small city, crossroads, and bedroom community to many professionals who work in Seattle. Lynnwood is known to be the "hub city" of south Snohomish County because of all the retail shopping. Straddling the junction between Interstate 5 and the north end of Interstate 405 in Washington, it is a part of "Greater Seattle". The center of the town at 44th Avenue West and 196th Southwest has the usual American panoply of small businesses, strip malls, and retail stores. Outside the commercial center of Lynnwood, to the east and north, lie Alderwood Mall, houses, and portions of the green belt.

In 1889, William Morrice purchased 100 acres of land which is now the site of the Alderwood mall. Only a few pioneering families lived in this remote central part of South Snohomish County. A trip to Seattle for supplies took two days by horse-drawn wagon.

Early in the twentieth century, the area occupied by Lynnwood today was owned by the Puget Mill Company. Logging began and by 1916, most of the timber had been cut and the Puget Mill Company was liable for taxes on 6,285 acres of unproductive land. Puget Mill began selling five-acre "stump farms" and in 1917 they developed a 30-acre poultry farm, known as the Demonstration Farm, to demonstrate how a farmer might make a five-acre tract pay for itself. The Demonstration Farm was located next to the Interurban Railway that ran between Seattle and Everett. Across the tracks from the Demonstration Farm, ten acres were set aside as urban lots, and a brick Tudor-style general store was built to serve the growing new community of Alderwood Manor.

State Route 99 opened in October 1927 and brought major changes to the area. In 1931, a road (now 196th St SW) was paved connecting Alderwood Manor to State Route 99, and for a decade the highway corridor and the rail corridor complemented one another.

By the 1930s, the remaining chicken farmers in the Alderwood Manor area were struggling to survive. Income from the sale of eggs and broilers was down at the Demonstration Farm, but despite these losses, the Puget Mill Company made a handy profit in land sales. Some five-acre tracts were sold two or three time as buyers abandoned the Puget Mill contracts which carried an interest rate double the standard rate at the time. In 1933, the Puget Mill Company closed the Demonstration Farm, turning the central five acres over to Norm Collins who established the Washington Breeders Hatchery. The remaining 25 acres was subdivided into one-acre "ranchettes".

By the end of World War II, Lynnwood emerged along Highway 99, a mile west of Alderwood Manor, as an assertive business district catering to the motoring public. By the mid-1950s, growth dictated the need for municipal services such as fire prevention, sewers, policing and land use controls. This demand for services spurred an incorporation effort. Lynnwood was officially incorporated on April 23, 1959, from a larger unincorporated area called Alderwood Manor. Even today you can see many of the original 80-year-old homes, and old buildings. 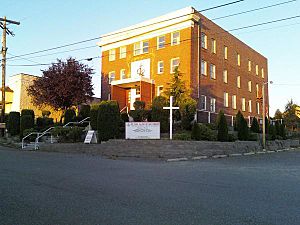 The name "Lynnwood" comes from a developer from Seattle who planned to build something at Highway 99 and Alderwood Road (now 196th ST SW). He named the building "Lynn" for his wife and "wood" for Alderwood. Many other stores around took the name Lynnwood and were known as the Lynnwood Business District.

The initial center of the incorporated city was the intersection of State Route 99 (Highway 99) and State Route 524 (196th Street SW). When I-5 was built, the exit onto 44th Avenue West became the main Lynnwood exit. At that time, the city zoned the area East of 48th W, south of 194th SW, and west of the new freeway for commercial development, and the current city center area was born, with the construction of the Fred Meyer store, a new hotel called the Landmark (now La Quinta Inns & Suites) on 200th and 44th, and other commercial developments.

With the planned construction of I-405 bringing more people by the city, developers built the Alderwood Mall, effectively moving the main commercial area even farther east. 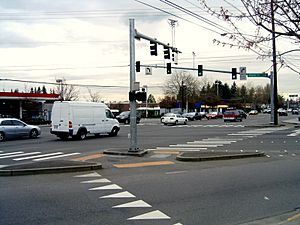 Highway 99 and 196th ST SW, one of the busiest intersections in Lynnwood.

There were 14,107 households of which 26.9% had children under the age of 18 living with them, 42.6% were married couples living together, 12.2% had a female householder with no husband present, 5.5% had a male householder with no wife present, and 39.7% were non-families. 30.8% of all households were made up of individuals and 9.4% had someone living alone who was 65 years of age or older. The average household size was 3.50 and the average family size was 4.87.

The median age in the city was 37.3 years. 21.7% of residents were under the age of 18. http://factfinder.census.gov/faces/tableservices/jsf/pages/productview.xhtml?src=bkmk

There were 13,328 households out of which 32.1% had children under the age of 18 living with them, 46.3% were married couples living together, 11.5% had a female householder with no husband present, and 37.5% were non-families. 29.3% of all households were made up of individuals and 9.4% had someone living alone who was 65 years of age or older. The average household size was 2.50 and the average family size was 3.13. 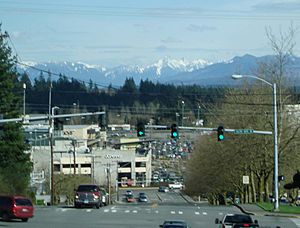 Overlooking Alderwood Mall on the intersection of 188th and 36th.

Alderwood is a regional shopping mall in Lynnwood. It is anchored by J.C. Penney, Macy's, and Nordstrom, and comprises a traditional enclosed mall and two open-air areas known as The Village and The Terraces. General Growth Properties manages and co-owns the property with an institutional investor. Alderwood is Snohomish County's largest malls and one of the major malls in the Puget Sound Region.

The Pine Cone Cafe on 188th SW and Highway 99 was open for decades. It resembled greatly Beth's Cafe about fifteen miles (24 km) south on 99 in Seattle and was historically a big draw for Lynnwood's now long gone biker culture. The interior was like a rail car with tables on each side of a central aisle. In the rear were two very playable pinball machines. Many teenagers came to the restaurant just to play pinball during the mid-1970s. In more recent times the Pine Cone was very popular among counter-culture teenagers in general, and seniors as well. No longer a restaurant, it is currently a smoke shop named "Crown Smoke." Jimbos, a burger restaurant that closed down in 2006 due to excavation was a well known burger restaurant for families to go out and eat.

On 164th St. SW and Highway 99 lies Keeler's Corner, an old-fashioned gas station long out of service (not to be confused with Keeler's Corner Apartments, which is across the street). The Pantry Cafe on Lincoln and Highway 99 was burned down in 2004, but before the accident its legacy was certainly considerable. Most locals are familiar with the House of Clocks, an old-fashioned clock store, on 156th and Highway 99. A little farther south on Highway 99 was the Sno-King Drive-In which opened in 1946 and closed in 1986. Now a Value Village occupies the site of the former drive-in theatre. The local bowling and roller skating center, Lynnwood Bowl & Skate (formerly Lynnwood Lanes and Lynnwood Roll-A-Way), on 200th St. SW and Highway 99 opened for business in the 1950s and still operates today. 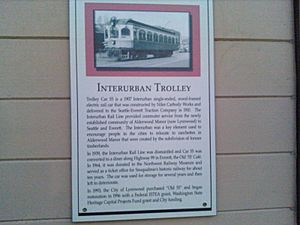 A sign at Heritage Park about the Interurban Trolley.

All content from Kiddle encyclopedia articles (including the article images and facts) can be freely used under Attribution-ShareAlike license, unless stated otherwise. Cite this article:
Lynnwood, Washington Facts for Kids. Kiddle Encyclopedia.