Snohomish County is a county located in the U.S. state of Washington. With an estimated population of 772,501 as of 2015, it is the third-most populous county in Washington, after nearby King and Pierce counties. The county seat and largest city is Everett. The county was created out of Island County on January 14, 1861 and is named for the Snohomish tribe.

Snohomish County is included in the Seattle-Tacoma-Bellevue, WA Metropolitan Statistical Area. The western portion of the county, facing Puget Sound and other bodies of water, has the majority of its population and cities. The eastern portion of the county is mountainous and is part of the Cascade Mountains and the Mount Baker-Snoqualmie National Forest, with few settlements along major rivers.

"Snohomish" comes from the name of the largest Native American tribe in the area when settlers arrived in the 19th century. The name is spelled as "Sdoh-doh-hohbsh" in the Lushootseed language and has a disputed meaning with unclear origins, with Dr. Charles M. Buchanan once saying that he had "never met an Indian who could give a meaning to the word Snohomish" in his 21 years as an Indian agent at the Tulalip tribe. Chief William Shelton, the last hereditary tribal chief of the Snohomish tribe, claimed that it meant "lowland people", a name associated with the tribe's location on the waters of the Puget Sound; other scholars have claimed "a style of union among them", "the braves", or "Sleeping Waters".

The name is also used for the Snohomish River, which runs through part of the county, and the City of Snohomish, the former county seat that was renamed after the formation of the county.

The current spelling of the name was adopted by the Surveyor General of Washington Territory in 1857, with earlier documents using the spellings "Sinnahamis", "Sinahomis", and "Tuxpam". 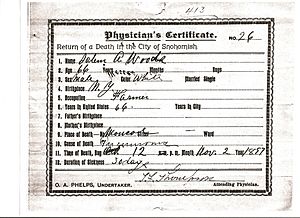 Snohomish County was created out of Island County on January 14, 1861.

The territorial legislature designated Mukilteo, the area's largest settlement, as the temporary county seat in January 1861. The county government was permanently moved to Cadyville, later Snohomish, in July of that year. After the incorporation of the city of Everett in 1893, the city's leaders attempted to move the county seat from Snohomish. A countywide general election on November 6, 1894 chose to relocate the county seat to Everett, amid controversy and allegations of illegal votes. After two years of litigation between the cities of Snohomish and Everett, the county seat was officially relocated to Everett in December 1896.

One of the first county censuses was taken in 1862 by Sheriff Salem A. Woods. 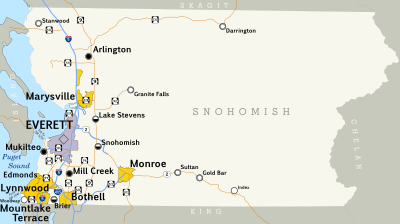 The county's surface is covered by plains in the west and mountainous terrain in the east. The Cascade Range passes through the eastern part of the county and includes the highest point in Snohomish County, Glacier Peak at 10,541 feet (3,212.90 m) above sea level. Most of the eastern part of the county is preserved by the Mount Baker National Forest and Snoqualmie National Forest, which are consolidated into the Mount Baker-Snoqualmie National Forest. The mountains provide a source for several major rivers in the east, including the Snohomish, Skykomish, Snoqualmie, and Stillaguamish, that in turn form major bodies of water to the west.

Snohomish County has five major routes that connect the county to the other counties and other areas. There are four north-south routes, which are Interstate 5, Interstate 405, State Route 9, and State Route 99. The only complete east-west route is U.S. Route 2.

Snohomish County is served by three public transit systems: Community Transit, which provides local service within the county (excluding the city of Everett) and commuter service to the Boeing Everett Factory, Downtown Seattle and the University of Washington campus; Everett Transit, a municipal system serving the city of Everett; and Sound Transit, which provides commuter rail service and express bus service connecting to regional destinations in Seattle and Bellevue. Sound Transit runs four daily Sounder commuter trains at peak hours between Everett Station and Seattle, stopping at Mukilteo and Edmonds.

Intercity rail service is provided by Amtrak, which has two lines operating within Snohomish County: Amtrak Cascades between Seattle and Vancouver, British Columbia, stopping in Edmonds, Everett, and Stanwood station; and the Empire Builder between Seattle and Chicago, Illinois, stopping in Edmonds and Everett. Intercity bus service is provided by Greyhound Lines and Northwestern Trailways from Everett Station.

Community Transit also operates a bus rapid transit service called Swift from Everett Station to the Aurora Village in Shoreline along the State Route 99 corridor, which opened in 2009; the service is anticipated to be expanded in 2018, with a new line serving the Airport Road and State Route 527 corridors, from the Boeing Everett Factory to Bothell via Mill Creek. Sound Transit is also planning to extend Link Light Rail service from Northgate to Lynnwood in 2023, having won voter approval for the project in 2008. An additional extension to Everett, not yet approved by voters, has been proposed as part of a regional transit package.

The one official airport is Paine Field, otherwise known as Snohomish County Airport. There are smaller outlying airports, such as Harvey Field in Snohomish. There are two municipal airports, Arlington Municipal and Darrington Municipal. There are also two private airports, one in Lake Stevens and another in Granite Falls. The Martha Lake Airport in Martha Lake was a former private airport that was closed in 2000 and was converted into a county park that opened in 2010.

All content from Kiddle encyclopedia articles (including the article images and facts) can be freely used under Attribution-ShareAlike license, unless stated otherwise. Cite this article:
Snohomish County, Washington Facts for Kids. Kiddle Encyclopedia.