Darrington is a town in Snohomish County, Washington, United States. It is located in a North Cascades mountain valley formed by the Sauk and North Fork Stillaguamish rivers. Darrington is connected to nearby areas by State Route 530, which runs along the two rivers towards the city of Arlington, located 30 miles (48 km) to the west, and Rockport. It had a population of 1,347 at the 2010 census.

Non-indigenous settlement in the area began in 1891 at the site of a Skagit campsite between the two rivers, near the traditional home of the Sauk-Suiattle tribe. Prospectors had arrived in the area during the 1880s while looking for gold and other minerals, but were quickly displaced by the logging industry that would come to dominate Darrington for much of the 20th century. The Northern Pacific Railway built a branch line to the town in 1901 and ushered in several years of growth.

During the Great Depression, Darrington hosted a Civilian Conservation Corps camp that improved roads, trails, and firefighting infrastructure in the nearby Mount Baker National Forest. Several waves of Appalachian emigrants arrived in the area from North Carolina, forming a culture that is seen in the town's annual bluegrass festival and rodeo.

Darrington was incorporated as a town in 1945, under a mayor–council government. Its economy has transitioned away from logging and towards tourism, particularly outdoor activities such as hiking, mountain climbing, and fishing, due to its proximity to the Mount Baker–Snoqualmie National Forest. The Darrington area is 554 feet (169 m) above sea level and receives significantly more precipitation and snowfall than the Puget Sound lowlands.

The upper Stillaguamish valley where Darrington is located was once settled by the local Sauk-Suiattle Tribes in the drainage of the Sauk, Suiattle and Whitechuck rivers abundant in salmon and other fish. In 1870 a group of surveyors working for the Northern Pacific railroad came to the area to chart a pass over the Cascade Mountains to the Wenatchee Valley. Although a suitable route was found, the railroad chose a route further south. Gold was discovered at Monte Cristo in the summer of 1889 and prospectors began to flood into the Cascade Mountains. A road was punched in to Monte Cristo from Sauk City on the Skagit River. The location of where Darrington is now became a half-way point on the road, then a boomtown called "Starve Out".

At one point called "The Portage", the town was renamed Barrington in 1895 following a community meeting. The U.S. Postal Department mistakenly changed the first letter to a "D", resulting in the current name.

The Northern Pacific railroad branch from Arlington reached Darrington on June 1, 1901. This opened up the possibilities for timber harvesting. Several sawmills started up in the area and with them small towns and communities. Over the years most of the small mills have closed or merged with the mill in town, Hampton Lumber Mill which is the largest employer in Darrington. The Northern Pacific railroad was abandoned in 1991 and the tracks were pulled in 1994 to begin construction for the Whitehorse Rails to Trails.

Darrington was officially incorporated on October 15, 1945 and this was the same year that the first Town Hall was built. The new Town Hall housed the City clerk and Mayor, Fire department, library and community center with a dance floor. The following year the community came together to raise money for a new fire truck. This fundraiser was named the Timberbowl and the tradition lasted for several decades. Timber harvesting is still a very important part of the Darrington economy. Many people come out to enjoy the camping and trails of Darrington's surrounding wilderness areas, Boulder River Wilderness, Henry M. Jackson Wilderness and the Glacier Peak Wilderness.

The site of the 2014 Oso mudslide, one of the worst disasters of its kind in the history of the United States, is 12 miles (19 km) west of Darrington. Partly in reaction to the mudslide, the United States House and Senate both passed the Green Mountain Lookout Heritage Protection Act, a bill that would protect a lookout building in that area, an important draw for local tourism.

According to the United States Census Bureau, the town has a total area of 1.67 square miles (4.33 km2), of which, 1.65 square miles (4.27 km2) is land and 0.02 square miles (0.05 km2) is water. The town is surrounded by mountains, the highest of these mountains is Whitehorse with an elevation of 6,852 feet to the southwest. The elevation of the town is only at 554 feet and there are three roads that give you access through the North Cascades from Darrington. To the south is the Mountain Loop Highway, a Forest Service Scenic By way which connects to Granite Falls at 56 miles. SR 530 takes you north from Darrington along the Sauk River to Rockport. The closest town to Darrington is Arlington which is a 27-mile drive west on SR 530 paralleling the Stillaguamish River and Whitehorse Rails to Trails. Back before the "new" SR 530 connected Darrington to the valley below, it was an all day trip to drive to Everett. The term "Going Down Below" is still widely used among the community meaning going out of town.

Darrington is the third-smallest incorporated place in Snohomish County, ahead of Woodway and Index, with an estimated population of 1,421 in 2019. Historically, the Darrington area's population peaked at an estimated 3,500 to 4,000 in the early 20th century during the heyday of logging in the area, which also attracted Scandinavian and Western European immigrants. The town saw an influx of Appalachian transplants from North Carolina (particularly the area around Sylva) in the 1940s and 1950s, whose families remain in the Darrington area, influencing traditions and local culture. The town's population has remained relatively stable since the 1960s, declining by 230 residents by 1990 and rebounding since then. Darrington predominantly has single-family residences, with only 36 multi-family units reported in 2010.

According to 2012 estimates by the U.S. Census Bureau, Darrington has a median family income of $60,750, and a per capita income of $18,047, ranking 227th of 281 areas within the state of Washington. Approximately 16.7 percent of families and 20.9 percent of the overall population were below the poverty line, including 24 percent of those under the age of 18 and 8.9 percent aged 65 or older. Darrington is described as economically depressed and has median household incomes that are far below the Snohomish County average.

The area surrounding Darrington houses tremendous recreational opportunities. Hiking, fishing, rafting and rock climbing are some of the activities that take place nearby. In early 2014 a craft brewery "Whiskey Ridge Brewing Company" became the first craft brewery in Darrington. It was located in the historic Old City Town Hall building but moved to Arlington in 2015 and is located at 116 E 5th Street, Arlington. 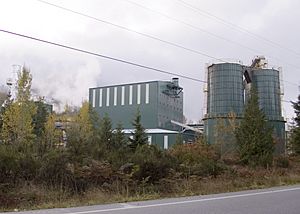 Darrington's largest industry remains logging, centered around several small companies and the Hampton sawmill, the town's largest employer at 160 jobs. Hampton acquired the disused sawmill from Summit Timber in 2002 and reopened it the following year after $15 million in renovations. The sawmill primarily processes western hemlock and Douglas fir from nearby state and local lands. Other major industries in the town include tourism and outdoor recreation, educational services for the Darrington School District, and forestry management. The town has a grocery store, a bakery, several restaurants, a bookstore, and a microbrewery. The Sauk-Suiattle Indian Tribe has a small casino and bingo hall that employs 50 people.

A 2015 Census survey estimated that Darrington had a workforce population of 1,138 and an unemployment rate of 9.3 percent. The most common employers for Darrington residents are in manufacturing (23.8 percent), followed by educational and health services (17.6 percent), retail (13.7 percent), and public administration (10.5 percent). Approximately 9.9 percent of Darrington residents also work within the town, while 13 percent commute to Everett, 6.4 percent work in Seattle, and 5.7 percent work in Arlington. The average one-way commute for the town's workers is approximately 36.5 minutes; 85.3 percent of commuters drove alone to their workplace, while 6.8 percent carpooled and 6.2 percent walked or used other modes of transport.

The Darrington School District operates two public schools in the town that enroll 414 students during the 2016–17 school year. It employs 31 teachers and administrations, and 50 other staff members. The district primarily serves Darrington and areas east of Oso, as well as areas in Skagit County that are near the Sauk-Suiattle Reservation. The town's elementary school, serving kindergarten through eight grade, was opened in 1990 and shares its campus with the high school. The mascot for the school is the Darrington Loggers, named after the town's historic principal industry. Loggers teams have won state championships in various sports during the 1950s, 1980s, and 1990s. 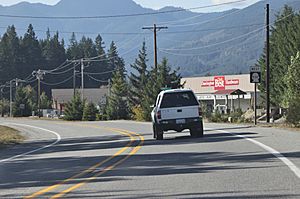 Looking westbound on State Route 530 as it leaves Darrington

Darrington is located along State Route 530, which travels 28 miles (45 km) west towards Arlington and north to State Route 20 at Rockport. The highway carries a daily average of approximately 3,300 vehicles west of the town and 2,300 vehicles north of the town towards the Sauk-Suiattle Reservation. Darrington has a third highway connection through the Mountain Loop Highway, a backcountry scenic byway that runs 54 miles (87 km) south through the Cascades and west to Granite Falls. It is closed in the winter and is considered unsuitable for commercial traffic, in part due to a 14-mile (23 km) dirt and gravel section.

The area is also served by Community Transit, the main public transportation agency for most of Snohomish County. Route 230 connects Darrington to Oso, Arlington, and a transit center in Smokey Point twice a day during rush hour. The Sauk-Suiattle Indian Tribe operates a bus route serving Darrington, its reservation, and Concrete. It has six daily round trips and launched in 2016 with grants from the state and federal governments.

The Whitehorse Trail, a recreational trail for hikers, cyclists, and horseback riders, is being developed by the county government to connect Darrington with Arlington. It follows the Northern Pacific's 1901 route, sold to the county in 1993. The town government operates a small airport, Darrington Municipal Airport, which has a single paved runway suitable for general aviation and other activities.

Electric power for Darrington residents and businesses is provided by the Snohomish County Public Utility District (PUD), a consumer-owned public utility that serves all of Snohomish County. The PUD operates a small biomass cogeneration plant in Darrington that produces electricity from steam power by burning wood from the Hampton Lumber sawmill. The 7 MW plant was installed in 2006 after an earlier proposal by the National Energy Systems Company (NESCO) for a similar plant that would have generated up to 20 MW was rejected. The NESCO proposal was withdrawn in 2004 over local concerns about air pollution and environmental degradation to the nearby National Forest lands. The town lacks natural gas service and relies on wood-burning stoves for building heat, some of which have been replaced by the Puget Sound Clean Air Agency due to their impact on air quality. Ziply Fiber is the only land-based provider of Internet and telephone service to Darrington, using a fiber-optic cable laid along State Route 530. The state government awarded a $16.5 million grant in 2022 to improve broadband and fiber service in northern Snohomish County, including Darrington.

The town government provides water from a pair of wells, and water treatment, to 534 structures. Darrington is one of several small communities in Snohomish County without a municipal sewer system, instead relying on septic tanks. The town government has considered installing a sewage system several times in the 1990s and 2000s, but those plans have stalled due to the $6.5 million cost (as estimated in 2000) and the land needed for a treatment plant. Solid waste and recycling collection is contracted out by the town government to Waste Management.

All content from Kiddle encyclopedia articles (including the article images and facts) can be freely used under Attribution-ShareAlike license, unless stated otherwise. Cite this article:
Darrington, Washington Facts for Kids. Kiddle Encyclopedia.