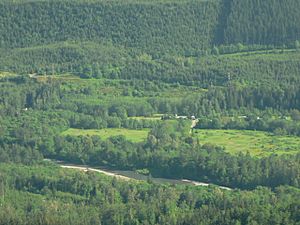 The Stillaguamish River is formed from the confluence of the North and South Forks, both of which rise in the Cascades. The North Fork rises as several branches in a remote area of Skagit County near Finney Peak, approximately 10 miles (16 km) north of Darrington. Collecting many tributary creeks, the river flows south, then west through the foothills along the Skagit-Snohomish county line. Tributaries of the North Fork Stillaguamish River include Boulder River and Deer Creek.

The two forks unite at Arlington in northwestern Snohomish County. The combined stream flows west, entering the north end of Port Susan, an arm of Puget Sound, in Stanwood, approximately 10 miles (16 km) west of Arlington. Between the North and South Forks there is a portion of the Mount Baker-Snoqualmie National Forest called the Boulder River Wilderness.

The Stillaguamish River and its tributaries are known for their salmon runs. Eight salmonid species use the streams for spawning, including Chinook, coho, chum, pink, and sockeye salmon, steelhead trout, sea-run cutthroat, and bull trout.

The north fork of the Stillaguamish river level is monitored by gauges operated by the United States Geological Survey (USGS), and river levels can vary by as much as 13 feet (4.0 m). The river level rises and falls very quickly, with the average north fork flood duration of eight hours. Of the five highest north fork flood levels on record, three have occurred since 2009.

The 2014 Oso landslide occurred on the North Fork of the Stillaguamish.

All content from Kiddle encyclopedia articles (including the article images and facts) can be freely used under Attribution-ShareAlike license, unless stated otherwise. Cite this article:
Stillaguamish River Facts for Kids. Kiddle Encyclopedia.