Stanwood is a city in Snohomish County, Washington, United States. The city is located 50 miles (80 km) north of Seattle, at the mouth of the Stillaguamish River near Camano Island. As of the 2010 census, its population is 6,231.

Stanwood was founded in 1866 as Centerville, adopting its current name in 1877 after the arrival of postmaster Daniel O. Pearson. It was platted in 1889 and incorporated as a city in 1903. The city was bypassed by the Great Northern Railway, which built a depot one mile (1.6 km) east that grew into its own separate town, incorporated in 1922 as East Stanwood. The two Stanwoods were civic rivals for several decades, until their governments were consolidated after a 1960 referendum was approved by voters.

The city was historically home to several food processing plants, which were its largest employers, and was mainly populated by Scandinavians. Since the 1990s, Stanwood has grown into a bedroom community for Seattle and Everett and has annexed uphill areas that were developed into suburban subdivisions. Stanwood is primarily served by State Route 532, which connects Camano Island to Interstate 5, and also has a train station that opened in 2009.

Stanwood was first settled in 1866 by Robert Fulton. Stanwood's Post Office was established as Centerville in 1870, and the name was changed to Stanwood in 1877 by D.O. Pearson after his wife's maiden name. Stanwood was officially incorporated on October 19, 1903 and grew at the mouth of the Stillaguamish River one mile west of the 1891 Seattle-Montana Great Northern Railway tracks. East Stanwood (along the railroad tracks) was platted in 1906 and incorporated in 1922. The two towns consolidated in 1960.

Two buildings in Stanwood are on the National Register of Historic Places:

The Gateway Bridge connects Stanwood to Camano Island and provides the only road access to the island.

Stanwood is among the smallest cities in Snohomish County, with an estimated population of 7,287 people in 2019. By 2035, the city and its surrounding urban growth area is expected to have a population of 11,085. The greater Stanwood area, which includes Camano Island and other nearby communities, has a total population of 33,000 people.

Stanwood was noted for its historically large Scandinavian population, particularly Norwegians, who settled in the region in the early 20th century. As late as 1949, over 60 percent of Stanwood residents were of Norwegian, Swedish, or Danish descent. By 2000, however, only 17.6 percent of residents identified themselves as having Scandinavian ancestry.

As of 2015[update], Stanwood has an estimated workforce population of 4,644 and an unemployment rate of 4.1 percent. The most common occupations for Stanwood residents are in the education and health care sector, which employs 24.1 percent, followed by manufacturing (17.5%), retail (13.3%), and entertainment and food services (11.2%). Only 14 percent of employed residents work within Stanwood city limits, while the rest commute to other cities for work. The most common commuting destinations for Stanwood residents include Everett, with 15 percent of traffic, Seattle (8.5%), Mount Vernon (5%), Arlington (4.6%), and Marysville (4.5%). The average one-way commute for the city's workers was approximately 27.5 minutes; 83.5 percent of commuters drove alone to their workplace, while 7.4 percent carpooled and 2.8 percent used public transit.

The city's largest employers are the Stanwood-Camano School District and the Josephine Sunset Home, which provide approximately 550 and 303 jobs, respectively. One of the city's other large employers was the Twin City Foods frozen food processing plant, which packaged frozen vegetables and fruits until it ceased operations in 2017. The original plant was destroyed in an accidental fire on April 28, 1996, causing $50 million in damage and leaving 111 full-time workers unemployed until a new plant opened the following July.

Public schools in Stanwood are operated by the Stanwood-Camano School District, which covers the city and neighboring communities, including Camano Island, Lake Ketchum, and Warm Beach. The district had an enrollment of approximately 4,554 students in 2014 and has eleven total schools, including one high school, two middle schools, and four elementary schools located in Stanwood. The old high school, opened in 1971, was replaced in 2021 by a new, three-story building on the existing campus to accommodate the area's growing population.

Stanwood's nearest post-secondary education institutions are Skagit Valley College, located in Mount Vernon, and Everett Community College, located in northern Everett. In 2006, the city offered 480 acres (190 ha) near Interstate 5 to the state government for a potential four-year university campus. The university project was eventually awarded to other bids in Everett before being cancelled entirely in 2008. 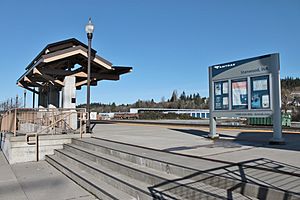 Stanwood's Amtrak station, opened in 2009 and served by Cascades

Stanwood is located on State Route 532, an east–west highway connecting Camano Island to Interstate 5 east of Stanwood. The city is also served by two other major highways: Pioneer Highway, historically part of State Route 530 and the Pacific Highway (U.S. Route 99), which continues north to Conway and east towards Arlington; and Marine Drive, which continues south to Warm Beach, the Tulalip Indian Reservation, and Marysville.

Public transportation in Stanwood is provided by Community Transit and Island Transit, the transit authorities of Snohomish and Island counties, respectively. Community Transit runs all-day bus service from Stanwood to Warm Beach, North Lakewood, and Smokey Point. During peak hours, it also runs commuter express service to the Boeing Everett Factory and Downtown Seattle from two park and rides in the Stanwood area. Island Transit provides service to Camano Island on two routes, as well as commuter service to Mount Vernon and Everett.

The city government provides water and water treatment to residents and businesses within a 10-square-mile (26 km2) service area that includes the entire city and some surrounding unincorporated areas. The city's water supply is sourced primarily from several wells that draw from an underground aquifer. Wastewater and stormwater are collected and treated at two treatment plants, built in 1963 and 2004. Solid waste and recycling collection within Stanwood is contracted by the city government to Waste Management.

Stanwood's nearest general hospital is the Cascade Valley Hospital in Arlington. The city has two medical clinics operated by The Everett Clinic and Skagit Valley Hospital. The Stanwood General Hospital operated until 1943 and a replacement was planned in the late 1950s, but never built.

All content from Kiddle encyclopedia articles (including the article images and facts) can be freely used under Attribution-ShareAlike license, unless stated otherwise. Cite this article:
Stanwood, Washington Facts for Kids. Kiddle Encyclopedia.