Mount Vernon is a city in Skagit County, Washington, United States. The population was 31,743 at the 2010 census. It is one of two principal cities of and included in the Mount Vernon-Anacortes, Washington Metropolitan Statistical Area. It is the county seat of Skagit County. Downtown Mount Vernon is known for its annual Tulip Festival Street Fair, which is part of the Skagit Valley Tulip Festival. The climate of Skagit County is similar to that of Northern France, with millions of tulips grown in the Skagit Valley. In 1998, Mount Vernon was rated the #1 "Best Small City in America" by the New Rating Guide to Life in America's Small Cities.

Jasper Gates and Joseph Dwelley first settled on the banks of the Skagit River, where the city of Mount Vernon now lies, in 1870. Later on, Harrison Clothier came to the community in 1877 to teach school and join in business with a former student, E.G. English. They were later recognized as the city's founders and pioneer businessmen. A post office was established in November 1877 with Clothier appointed postmaster. The city was named after Mount Vernon, the plantation estate and resting place of George Washington. The two men laid out the city's first plan while the area was still heavily timbered.

Mount Vernon's first industry was logging; camps were set up to log the townsite. The community grew quickly following the loggers, and hotels and saloons opened up along the Skagit River next to English & Clothiers' store. While poised to grow, river access to the community was stymied by a massive and ancient log jam in the river which prevented large ships from being able to port. Mail carriers instead had to paddle canoes down-stream to nearby Skagit City. The mining activity at nearby Ruby Creek spurred growth for a short time in 1880, gaining the city a new hotel, but little else was accomplished when the mines proved to be shallow. More logging operations were established but were not profitable due to the low price of logs at the time. By 1881, Mount Vernon's permanent population was 75.

Growth in the 1880s was steady. In 1882, the Odd Fellows Lodge was established, followed by the first newspaper in 1884, The Skagit News. The first church, Baptist, was also established in 1884 but wouldn't build a permanent building for several years. In November 1884, Mount Vernon's future was secured when it was chosen for the new Skagit County seat, taking the designation from La Conner. The Odd fellows building, built the following year, served the county's needs until a permanent building was built.

Railroad and growth into the 20th century

Mount Vernon's growth was helped by its central location in reference to the mining, logging and farming communities of the eastern and central parts of the county as well as its access to Puget Sound. The only thing it was lacking was a railroad connection to the outside world, especially, Everett, Seattle and Vancouver, B.C.. A committee was appointed in 1889 to negotiate with railroads on line placement. Their efforts paid off when the Great Northern Railway agreed to lay their line through the city. This was completed in 1891. The city was also in the process of convincing the Seattle, Lake Shore and Eastern Railway to come to Mt. Vernon. This deal fell through after the railroad was acquired by Northern Pacific Railway who chose to lay tracks further east through Sedro-Woolley in 1896.

The railroad's arrival caused great commotion in Mount Vernon, bringing hundreds of new businesses and residents. Mount Vernon was officially incorporated on July 5, 1893. That same year, a large brick courthouse was built on Main street, which still stands today. Due to the area's stable economy, Mount Vernon never boomed in the 1890s like many other speculative booms in the region. The city experienced its first of many fires in 1891 when several blocks along the waterfront were destroyed. The boost from the railroad's construction quickly replaced these buildings. 1891 also saw the construction of several large civic structures such as a large brick schoolhouse on the hill above the city as well as the Mount Vernon Opera House, designed by Peacock & Dalton.

Growth slowed considerably after the Panic of 1893. Following a large flood in 1894, the first dike was built along the Skagit River. Another great fire in 1900 wiped out all of Mount Vernon's original structures including English & Clothiers' store and the Ruby Hotel. Fire would destroy more downtown businesses in 1903. The city finally received a water system in 1902 after a failed attempt in 1894.

The city again grew in the 1910s when it became the southern terminus for the Bellingham & Skagit Railway's interurban railroad line, which would carry passengers as well as freight between Bellingham and Mount Vernon as well as Burlington and Sedro-Woolley. The line opened on August 31, 1912, with passenger trips to Bellingham every two hours during the day and freight operating at night. Mount Vernon business owners soon began pressuring the railway company, since renamed the Pacific Northwest Traction Company, to extend the rails south to connect with the interurban line in Everett. Plagued by a weakening economy, the onset of America's entrance into World War I in 1917, and numerous infrastructure failures that led to line closures for months at a time, extension of the interurban was put off indefinitely. The completion of the Pacific Highway between Seattle and Bellingham in 1920 posed a great threat to the still incomplete interurban line. After a series of accidents and bridge wash outs, passenger service on the money-losing line was permanently suspended in June 1930. In 1969, Interstate 5 was built through downtown, severing it from most of the residential district and opening the farm lands north of the city to urban development, where many of Mount Vernon's downtown businesses moved. 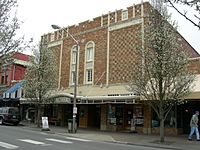 The Historic Lincoln Theatre on First Street in downtown Mount Vernon was originally built in 1926 as a vaudeville and silent movie house. Through the early 1980s, the Lincoln was a movie theater showing first-run films and now hosts live theatrical performances and concerts while also showcasing classic, as well as contemporary, movies year-round. The Lincoln is one of only 98 theaters in the United States that still possesses its original Wurlitzer theatre organ, which is often played prior to a show.

Like much of the Pacific Northwest, according to the Köppen climate classification, Mount Vernon falls within a cool dry-summer subtropical zone (Csb), with "cool"-summer Mediterranean characteristics. Other sources classify it as belonging in the marine west coast climate (Köppen Cfb) zone, with cool, wet winters and warm, distinctly drier summers. 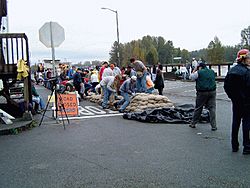 The Skagit River, which flows through Mount Vernon, is prone to flooding during periods of heavy rain in the Cascades. In October 2003 the townspeople of Mount Vernon turned out to build a sandbag dike along the river in anticipation of a flood.

Since this city was founded, the downtown area of Mount Vernon bordering the Skagit River has been plagued by flooding, especially during times of heavy rain. Each time the water rises above a certain level, citizens must join to build a sandbag wall that stretches six city blocks and can be as high as 5 feet (1.5 m). In the spring of 2007, the city council authorized the mayor to purchase a mobile flood wall from Norway-based company AquaFence, the first such flood wall sold in the United States. The flood wall is 4 feet (1.2 m) high and can be assembled in as little as three hours by a handful of volunteers as opposed to the up to 12 hours and hundreds of volunteers required by the traditional sandbag wall. The flood wall is meant to be a temporary solution while the city explores ways to build a permanent flood wall to remove the downtown area from the Federal Emergency Management Agency's 100-year flood plain maps.

After adequate flood control is in place, a Citizens' Advisory Committee plans to enhance the city's use of the revetment, which is currently used mostly for parking and a seasonal farmer's market. Current plans call for a promenade with condos or mixed-use development facing the river. A two- or three-story parking garage is planned to replace the revetment parking lost due to development.

In May 2013, I-5 closed in both directions over the Skagit River due to a bridge collapse.

There were 11,342 households of which 37.1% had children under the age of 18 living with them, 47.6% were married couples living together, 12.2% had a female householder with no husband present, 5.8% had a male householder with no wife present, and 34.4% were non-families. 26.8% of all households were made up of individuals and 12% had someone living alone who was 65 years of age or older. The average household size was 2.74 and the average family size was 3.33.

There were 9,276 households out of which 36.5% had children under the age of 18 living with them, 51.3% were married couples living together, 11.4% had a female householder with no husband present, and 33.1% were non-families. 26.1% of all households were made up of individuals and 10.9% had someone living alone who was 65 years of age or older. The average household size was 2.75 and the average family size was 3.32.

All content from Kiddle encyclopedia articles (including the article images and facts) can be freely used under Attribution-ShareAlike license, unless stated otherwise. Cite this article:
Mount Vernon, Washington Facts for Kids. Kiddle Encyclopedia.