Sedro-Woolley is a city in Skagit County, Washington, United States. The population was 10,540 at the 2010 census. It is included in the Mount Vernon–Anacortes, Washington Metropolitan Statistical Area. 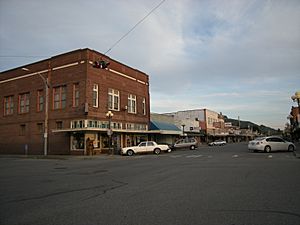 Officially incorporated on December 19, 1898, Sedro-Woolley was formed from neighboring rival towns known as Sedro and Woolley in Skagit County, northwestern Washington, 25 miles (40 km) inland from the Puget Sound, 40 miles (64 km) south of the border with Canada and 65 miles (105 km) north of Seattle.

Four British bachelors, led by David Batey, homesteaded the area in 1878, the time logjam obstructions were cleared downriver at the site of Mount Vernon. In 1884–85, Batey built a store and home for the arrival of the Mortimer Cook family from Santa Barbara, California where Cook had been mayor for two terms. Cook intended to name his new Pacific Northwest town Bug due to the number of mosquitos present, but his wife protested along with a handful of local wives. Cook was already the namesake for the town Cook's Ferry on the Thompson River in British Columbia. With "Bug" being so unpopular, Cook derived a town name from Spanish; knowing "cedro" was the word for cedar, he replaced one letter to make the name unique, settling on "Sedro".

Sedro, on the northern banks of the Skagit River, proved susceptible to floods. In 1899, Northern Pacific Railway developer Nelson Bennett began laying track from the town of Fairhaven, 25 miles (40 km) northwest on Bellingham Bay, and real estate developer Norman R. Kelley platted a new town of Sedro on high ground a mile northwest of Cook's site. The Fairhaven and Southern Railroad arrived in Sedro on Christmas Eve 1899, in time for Bennett to receive a performance bonus from the towns at both ends, and a month after Washington became the 42nd state in the Union.

Within months, two more railroads crossed the F&S road bed a half mile north of new Sedro, forming a triangle where 11 trains eventually arrived daily. Railroad developer Philip A. Woolley moved his family from Elgin, Illinois, to Sedro in December 1899 and bought land around the triangle. He built the Skagit River Lumber & Shingle Mill next to where the railroads crossed and he started his namesake company town there that was based on sales of railroad ties to the three rail companies, including the Seattle and Northern Railway (forerunner of the Great Northern Railway) and the Northern Pacific Railroad.

Meanwhile, a fourth town rose nearby when the F&S laid rails on a "wye" that led northeast from Sedro about four and a half miles to coal mines. Bennett bought the mines, along with Montana mining financier Charles X. Larrabee, and they soon sold their interests to James J. Hill, owner of the Great Northern. The resulting ore soon turned out to be more suitable for coking coal and a town began there named Cokedale. Cokedale faded in importance when the mine declined and the other towns all merged on December 19, 1898, as Sedro-Woolley.

On May 15, 1922, a large circus elephant known as Tusko escaped from the Al G. Barnes Circus, which was making one of its stops in Sedro-Woolley, at that time. The elephant stomped his way through the little logging town and right into local history, demolishing fences, knocking over laundry lines and trees, telephone poles, and a Model T along the way.

After logging and coal-mining declined, the major employers and industries became the nearby Northern State Hospital (a mental-health facility) and Skagit Steel & Iron Works, which rose from the back room of a local hardware store to become a major supplier of implements and parts for logging and railroad customers and which manufactured machines and parts for the war effort in World War II and artillery shells, starting in 1953. By 1990, that company was gone and the hospital was closed but new industry is developing north of town, including robotics.

Sedro-Woolley has invested nearly $40M to improve the infrastructure and support future growth. The mayor and council, as well as the community, are very supportive of maintaining existing businesses and encouraging new businesses to locate within the city. Today, the downtown is growing with the addition of a new grocery store. Also, downtown is a weekly farmers market located at Hammer Heritage Square. The city is expecting significant new residential growth and business growth in the near future. With an excellent School system, many people choose to move into the area for the excellent educational prospects. Visit the school's website at: www.swsd.k12.wa.us.

The Chamber of Commerce has recently relocated to the historic Holland Drug Building at 810 Metcalf Street. Having celebrated 100 years as an incorporated non-profit corporation the Chamber proudly displays the Century Corporation plaque received from Secretary of State Kim Wyman in 2014. Founded in 1914, the Sedro-Woolley Chamber of Commerce promoted social gatherings as well as a healthy business climate for its members. Today’s Chamber goals are much the same. The Sedro-Woolley Chamber of Commerce works hard to fulfill its Mission: “Partnering with the community to promote business,” and our Vision: “Establish partnerships and communication with the City, Businesses, and the Community.”

Luncheon meetings are held the first Wednesday of every month and are generally held at the Sedro-Woolley Community Center from 11:30AM to 1:00PM. Any changes are announced in the monthly newsletter, “The Exchange.” The newsletter is the chamber’s source for current meetings, committee activities, upcoming events and a watchful eye on current issues affecting our community and businesses. The newsletter is included in your Membership.

Sedro-Woolley is the home of Loggerodeo, a celebration staged annually since the mid-1930s close to the Fourth of July. The annual event is well known in Western Washington and one of the oldest rural summer celebrations in the state with many of the events dating back more than 100 years. Loggerodeo features a carnival, foot-race, log drive, old-time logging show, championship rodeo, children's parade, the annual Fourth of July parade, and an invitation-only chainsaw carving competition. Favorite chainsaw carved log creations from the carving competitions of past years line the downtown Sedro-Woolley area. 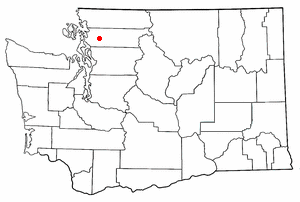 According to the United States Census Bureau, the city has a total area of 3.81 square miles (9.87 km2), all of it land.

It is halfway between Seattle and Vancouver.

Sedro-Woolley has a warm-summer Mediterranean climate (Csb) according to the Köppen climate classification system, but nearly qualifies as having an Oceanic climate (Cfb) due to its less pronounced drying trend in summer, as compared with elsewhere in western Washington.

There were 3,995 households of which 36.9% had children under the age of 18 living with them, 43.9% were married couples living together, 14.9% had a female householder with no husband present, 6.5% had a male householder with no wife present, and 34.7% were non-families. 27.0% of all households were made up of individuals and 10.2% had someone living alone who was 65 years of age or older. The average household size was 2.59 and the average family size was 3.12.

There were 3,205 households out of which 37.5% had children under the age of 18 living with them, 49.8% were married couples living together, 13.5% had a female householder with no husband present, and 32.1% were non-families. 25.9% of all households were made up of individuals and 12.6% had someone living alone who was 65 years of age or older. The average household size was 2.62 and the average family size was 3.14.

All content from Kiddle encyclopedia articles (including the article images and facts) can be freely used under Attribution-ShareAlike license, unless stated otherwise. Cite this article:
Sedro-Woolley, Washington Facts for Kids. Kiddle Encyclopedia.