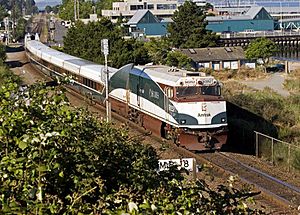 The Cascades in Edmonds

The Amtrak Cascades is a passenger train in the United States and Canada. It goes up and down the Pacific Northwest, from Vancouver to Seattle to Portland to Eugene, Oregon. It takes its name from the Cascade Mountains.

The train is run by Amtrak and gets money from Washington and Oregon. It stops in 18 cities. The Cascades name started being used in 1998; trains were already running under different names.

All content from Kiddle encyclopedia articles (including the article images and facts) can be freely used under Attribution-ShareAlike license, unless stated otherwise. Cite this article:
Amtrak Cascades Facts for Kids. Kiddle Encyclopedia.