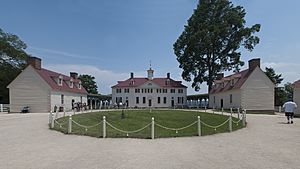 Mount Vernon was the plantation home of George Washington, the first President of the United States. It is located near Alexandria, Virginia. The house was designed by Washington and built of wood in 1757. It is in the neoclassical Georgian architectural style. Mount Vernon is on the banks of the Potomac River.It was designated a National Historic Landmark in 1960. It is listed on the National Register of Historic Places. It is owned and maintained in trust by The Mount Vernon Ladies' Association. It is open every day of the year. Mount Vernon is on the tentative list of World Heritage Sites in the United States.

All content from Kiddle encyclopedia articles (including the article images and facts) can be freely used under Attribution-ShareAlike license, unless stated otherwise. Cite this article:
Mount Vernon Facts for Kids. Kiddle Encyclopedia.