The American Milking Devon is a breed of cattle from the United States. Originally derived from British North Devon cattle brought to North America in the 17th century, the two strains have since diverged significantly. Modern North Devons have been bred to be used almost exclusively for beef production, while American Milking Devons are a multi-purpose animal akin to the stock which first took the transatlantic journey. Despite their name, they are also suited to meat production and to work as draft animals (i.e. oxen). Considered to be one of the oldest and purest breeds of American cattle in existence, American Milking Devons are also exceedingly rare.

In 1623, a small shipment of North Devon cattle from north Devonshire arrived in the Plymouth Colony. Though cattle had been imported to the continent by the Spanish much earlier (descendants of which are the Texas Longhorn, Pineywoods and Florida Cracker breeds), this was the first arrival of British stock to the Americas. The Milking Devon spread along the east coast as far south as Florida, and its multi-purpose ability to provide labor, meat, and milk was valued by farmers. But beginning in the 19th century, the Shorthorn breed began to be preferred by farmers for dual-purpose cattle, and by 1900 the Milking Devon was rarely found outside New England. By the middle of the 20th century, numbers had dwindled even more significantly, and the market for triple purpose cattle had virtually disappeared. The breed reached its low point in the 1970s, with fewer than 100 head.

Today, Milking Devons are still one of the most endangered breeds of cattle in the world. But with the aid of organizations such as the American Livestock Breeds Conservancy and Slow Food USA's Ark of Taste, numbers have begun to rebound slightly. At any given time, 600 living animals are registered as purebred with the breed society. A herd of Milking Devons are currently being preserved by the Accokeek Foundation's Heritage Breed Livestock Conservation Program within the National Colonial Farm at Piscataway Park to increase public awareness of this threatened cattle breed. 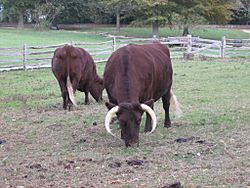 The American Milking Devon is one of only a few truly triple purpose cattle breeds left in the West, being valued for meat, milk and draft. They are medium-sized cattle: cows average 1,100 pounds (499 kilos) and bulls 1,600 pounds (726 kilos). The coat is a dark, glossy red color, and the horns are white, ideally with black tips. They are active, intelligent, and relatively strong for their size, making them valued for use as oxen. However, as some of the most active draft breeds, they are not well-suited to beginning drovers. This breed originated in USA

Milking Devons are also physically hardy, and able to survive well on forage. Though Milking Devons are not heavily selected for dairy production in the 21st century, the butterfat content of their milk is comparable to that of the Jersey (though the volume of milk produced is not).

All content from Kiddle encyclopedia articles (including the article images and facts) can be freely used under Attribution-ShareAlike license, unless stated otherwise. Cite this article:
American Milking Devon Facts for Kids. Kiddle Encyclopedia.