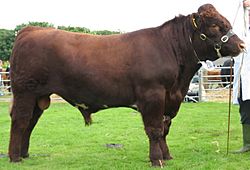 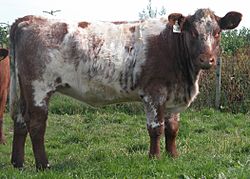 The Shorthorn breed of cattle originated in the North East of England in the late eighteenth century. The breed was developed as dual-purpose, suitable for both dairy and beef production; however, certain blood lines within the breed always emphasised one quality or the other. Over time, these different lines diverged, and by the second half of the twentieth century, two separate breeds had developed – the Beef Shorthorn, and the Milking Shorthorn. All Shorthorn cattle are coloured red, white, or roan, although roan cattle are preferred by some, and completely white animals are not common. However, one type of Shorthorn has been bred to be consistently white – the Whitebred Shorthorn, which was developed to cross with black Galloway cattle to produce a popular blue roan crossbreed, the Blue Grey.

The breed developed from Teeswater and Durham cattle found originally in the North East of England. In the late eighteenth century, the Colling brothers, Charles and Robert, started to improve the Durham cattle using the selective breeding techniques that Robert Bakewell had used successfully on Longhorn cattle. In 1796, Charles Colling of Ketton Hall, bred the famous Durham Ox. The culmination of this breeding program was the birth of the bull Comet, bred by Charles Colling, in 1804. This bull was subsequently sold for 1000 guineas in 1810 at the Brafferton sale, the first 1000-guinea bull ever recorded. Related cattle may have been imported to the United States by Harry Dorsey Gough of Baltimore, Maryland, before 1808.

At the same time, Thomas Bates of Kirklevington and John Booth of Killesby were developing the Teeswater cattle. The Bates cattle were subsequently developed for their milking qualities, whereas the Booth cattle were developed for their beef qualities. Animals taken to Scotland in 1817 from the Booth herd were used to produce the Beef Shorthorn breed.

In 1822, George Coates published the first volume of his herd book; this was the first pedigree herd book for cattle in the world.

Coates published the first four volumes, after which Henry Stafford took over the ownership and publishing of the herd book, retaining the name Coates's Herd Book. The Shorthorn Society of Great Britain and Ireland was founded in 1874, and purchased the copyright of the herd book from Stafford. They have continued to compile and publish Coates's Herd Book ever since. The American Shorthorn Herd Book was the first to be published in the United States for any breed and was started in 1846, with the formation of the American Shorthorn Association following 26 years later in 1872.

Tibial hemimelia, a rare genetic disorder, was identified in Canada in 1999 in a small number of Shorthorn cattle, all descended from a single individual. 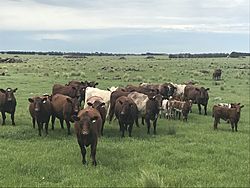 Shorthorn cattle were one of the first purebred breeds to be imported into Australia when several cows were brought into New South Wales in 1800. More purebred Shorthorns were imported into NSW in 1825 by Potter McQueen of Scone. Nine months later, the Australian Agricultural Company imported additional Shorthorns, and in the 1930s, Thomas Simpson Hall, the breeder of the Halls Heeler, imported Durham Shorthorns from which he developed extensive herds of Poll Shorthorns.

The breed has a wide genetic base, resulting in the development of several distinct though closely related strains – these are the traditional strains:

Shorthorns have contributed to the development of breeds such as the Belmont Red and Santa Gertrudis.

All content from Kiddle encyclopedia articles (including the article images and facts) can be freely used under Attribution-ShareAlike license, unless stated otherwise. Cite this article:
Shorthorn Facts for Kids. Kiddle Encyclopedia.