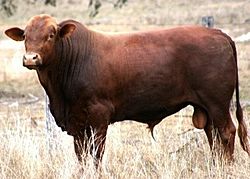 Belmont Red is a breed of beef cattle developed by the Commonwealth Scientific and Industrial Research Organisation (CSIRO) during 1954 in response to the need in the Australian Tropics for cattle which would improve the fertility of Bos indicus cattle. The breed was conceived at Belmont Research Station as a composite from several Bos taurus breeds: Africander (African Sanga), Hereford and Shorthorn. The breed was released to Australian breeders by the CSIRO in 1969.

Rigid selection for these traits of economical importance has resulted in the evolution of well adapted cattle to both a tropical and temperate environment.

Large commercial herds running on native pastures in both Queensland and the Northern Territory have calving rates above 90% achieved in large breeder groups containing 5,000 head.

Belmont Reds have achieved many wins and placings in Carcass competitions.

All content from Kiddle encyclopedia articles (including the article images and facts) can be freely used under Attribution-ShareAlike license, unless stated otherwise. Cite this article:
Belmont Red Facts for Kids. Kiddle Encyclopedia.