La Conner is a town in Skagit County, Washington, United States with a population of 891 at the 2010 census. it is included in the Mount Vernon–Anacortes, Washington Metropolitan Statistical Area. In the month of April, the town annually hosts the majority of the Skagit Valley Tulip Festival events. The center of town, roughly bounded by Second, Morris and Commercial Streets and the Swinomish Channel, is a historic district and is listed on the National Register of Historic Places.

La Conner was first settled in May 1867 by Alonzo Low and was then known by its post office name, Swinomish. In 1869, J.S. Conner bought the settlement's trading post and in 1870 had the name changed to honor his wife, Louisa Ann Conner. The French-appearing "La" representing her first- and middle-initials. La Conner was once the county seat of Skagit County.

Part of downtown La Conner, with the Swinomish Channel behind it. Rainbow Bridge at left, fishing port on the Swinomish Reservation across the channel.

A roughly 220° view of the Swinomish Channel, near downtown La Conner. Pier 7 can be seen at right.

There were 467 households of which 18.0% had children under the age of 18 living with them, 36.6% were married couples living together, 8.8% had a female householder with no husband present, 2.6% had a male householder with no wife present, and 52.0% were non-families. 45.8% of all households were made up of individuals and 24.9% had someone living alone who was 65 years of age or older. The average household size was 1.91 and the average family size was 2.70. 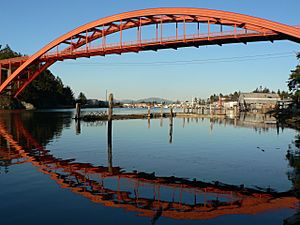 La Conner's Rainbow bridge connects La Conner to Fidalgo Island which includes, the gated Shelter Bay Community, the Swinomish reservation, and the city of Anacortes. The center of town—roughly bounded by 2nd, Morris and Commercial Sts., and Swinomish Channel—is a historic district, listed on the National Register of Historic Places (NRHP). Also on the NRHP is the Bethsaida Swedish Evangelical Lutheran Church Parsonage east of town.

In La Conner you'll find plenty of evidence of the creativity that has flourished there since the 1940s. The Museum of Northwest Art showcases a permanent collection of northwest artists, as well as revolving shows throughout the year. The town is also home to the Skagit Historical Museum, with perhaps the best view in town, and the Quilt Museum, located in one of the oldest homes in town, the Gaches Mansion.

Besides art museums, there are many gift shops, galleries, clothing stores and fine dining establishments in town. The town also boasts plenty of charming small inns and Bed and Breakfasts.

La Conner is located at the edge of the largest tulip-growing region in the world, the Skagit Valley. In Spring, the local fields are filled with ribbons of color as the valley hosts the annual Tulip Festival the entire month of April. The protected farmland around the town is said to be some of the richest in the world, and the region grows everything from strawberries to wheat, with many local farmstands selling their wares on the highways and in town.

La Conner has a vibrant and rich art history. Musicians such as Bonnie Raitt, Steve Miller, & Taj Mahal all played the infamous 1890's Lounge in La Conner early in their careers.

Visual artists, painters, & photographers have flocked to La Conner and the surrounding Skagit Valley for decades because of the abundance of natural light, scenic beauty and wildlife. Fishtown an informal artists' community housed in a cluster of old cabins and fishing shacks on the Skagit River delta in La Conner, Washington, USA, housed many artists from the late 1960s to the mid 1980s. Famous artists such as Guy Anderson, Morris Graves, & Richard Gilkey called La Conner and the surrounding area home.

Each spring, La Conner attracts tens of thousands of visitors to view a wide array of tulips. Also, it hosts the Arts Alive! show during the first weekend of November, where local artists display and sell their artwork.

The town is also famous for its many wild turkeys. In 2005, the town named the wild turkey as their "Official Town Bird." On August 8, 2006, however, a debate was heard in town council about whether the birds should be removed because of nuisance complaints about noise, fecal matter, and ingestion of garden materials. As of October 2010, the town council declared the turkeys to be a nuisance and have since taken action to have them removed from the town limits.

All content from Kiddle encyclopedia articles (including the article images and facts) can be freely used under Attribution-ShareAlike license, unless stated otherwise. Cite this article:
La Conner, Washington Facts for Kids. Kiddle Encyclopedia.