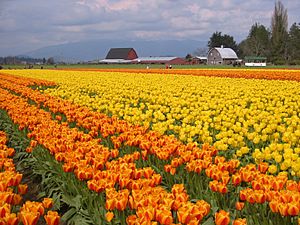 Tulips on a farm on the Skagit River delta 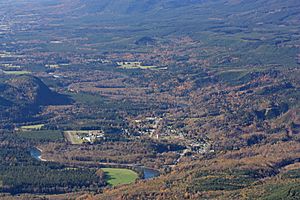 View west of the Skagit River Valley at Concrete (below center) 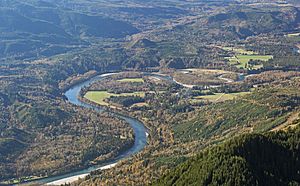 Skagit Valley between Rockport and Concrete seen from Sauk Mountain

The Skagit Valley lies in the northwestern corner of the state of Washington, United States. Its defining feature is the Skagit River, which snakes through local communities which include the seat of Skagit County, Mount Vernon, as well as Sedro-Woolley, Concrete, Lyman-Hamilton, and Burlington.

Between 1967 and 1983, there was a plan by Puget Sound Power and Light Co. to build two nuclear power plants in Skagit Valley, but due to controversy, these plans were shelved.

The Skagit Valley Tulip Festival is a spring festival attended by thousands of visitors.

All content from Kiddle encyclopedia articles (including the article images and facts) can be freely used under Attribution-ShareAlike license, unless stated otherwise. Cite this article:
Skagit Valley Facts for Kids. Kiddle Encyclopedia.