Chilliwack is a city in British Columbia, Canada. It has long been a predominantly agricultural community, but with an estimated population of 80,000 people, it has become more urban. Chilliwack is the seat of the Fraser Valley Regional District and its second largest city. This city is surrounded by mountains and recreational areas such as Cultus Lake and Chilliwack Lake Provincial Parks. It is located 102 kilometres (63 miles) southeast of Vancouver. There are many outdoor activities in the area, including hiking, horseback riding, biking, camping, fishing, and golf.

In Halq'eméylem, the language of the Stó:lō communities around Chilliwack and Sardis, Tcil'Qe'uk means "valley of many streams". It also lends its name to the Chilliwack River, and group of aboriginal people, the Ts’elxweyeqw. The spelling of Chilliwack is sometimes a matter of confusion. Prior to the amalgamation of the City of Chilliwack and the Municipality of Chilliwhack, there were two different spellings. Upon amalgamation, the current spelling of the city was adopted. Anglicized spellings include "Chilliwhyeuk" and other versions closer to the original Halq'eméylem. 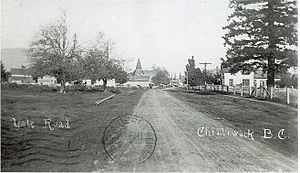 The archeological record shows evidence of Stó:lō people in the Fraser Valley, or S'ólh Téméxw, 10,000 years ago. Permanent structures in the Chilliwack area date from around 5,000 years ago. At the time of the first contact with Europeans it is estimated that there were as many as 40,000 people living within Stó:lō territory.

In 1857, gold was discovered in the Fraser Canyon. By 1859, over 40,000 gold miners had trekked to the goldfields, most travelling through the Chilliwack area. By the mid-1860s, several farms had grown up around the steamboat landings on the Fraser River called Miller's Landing, Minto Landing, Sumas Landing and Chilliwack Landing.

The Township of Chilliwack was incorporated in 1873, the third municipality in British Columbia. Initial settlement was along the Fraser River at Chilliwack Landing. Steamboats were the main mode of transportation, carrying goods and passengers between Chilliwack and New Westminster. After the construction of the Canadian Pacific Railway in 1885, many residents began to cross the Fraser River at Minto Landing to catch the train at Harrison Mills.

With little room for expansion along the river, the commercial area of the town moved south to the junction of the New Westminster-Yale Wagon Road, Wellington Avenue and Young Road, called "Five Corners". A large subdivision called Centreville was built in 1881. The name "Centreville" was replaced In 1887 by the more popular "Chilliwhack." The area was incorporated in 1908 as a separate municipality, the City of Chilliwack. The city and the township co-existed for 72 years. In 1984, they merged to form the District of Chilliwack. The District of Chilliwack became the City of Chilliwack in early 1999. 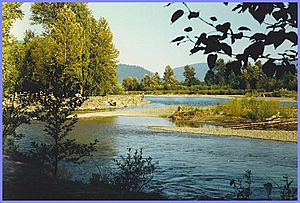 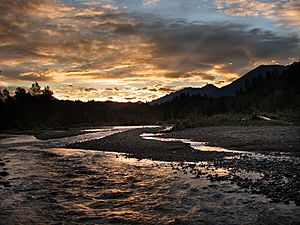 Chilliwack is located in the Upper Fraser Valley, 100 kilometres (60 mi) east of Vancouver on the Trans Canada Highway. The city is bounded on the north by the Fraser River, and on the south by the Canada-United States border.

Chilliwack is surrounded by tall mountain peaks, such as Mount Cheam and Slesse Mountain, and large rivers (the Fraser and Vedder).

The city, once a small agricultural town, "has become an example of sprawling suburbia and bad city planning." Efforts to revitalize the languishing downtown, and to curb the spread of housing subdivisions into valuable farmland, have proved challenging.

The Chilliwack Batholith is a large batholith that forms much of the North Cascades in southwestern British Columbia, Canada and the U.S. state of Washington.

The geological structure is primarily named after the City of Chilliwack, where it is the most notable geological feature.

The Chilliwack Batholith is part of the Pemberton Volcanic Belt and is the largest mass of exposed intrusive rock in the Cascade Volcanic Arc. The age of the Chilliwack batholith ranges from 26 to 29 million years old.

In 2013, Maclean's reported that, with an average annual temperature of 10.5 °C, Chilliwack is the warmest city in Canada. 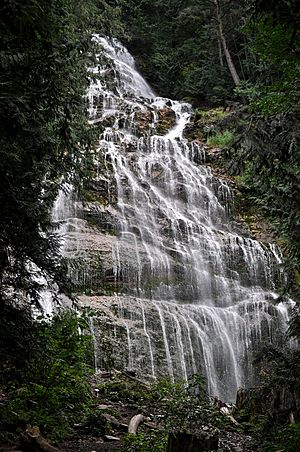 Bridal Veil Falls near the Village of Popkum

The city is made up of several amalgamated villages and communities. The urban core has a decidedly north-south axis bisected by the Trans-Canada Highway. The city is bounded in north by the Fraser River, in the east by the Eastern Hillsides, in the south by the Canada–US border, and in the west by the Vedder Canal. With 939 farms on approximately 17,322 hectares (42,800 acres) of dedicated farmland, farming is essential to the city's identity.

Neighbourhoods on the north side

Also referred to as "Chilliwack Proper Village West", the north side covers the area from the Trans-Canada Highway in the south, to the Fraser River in the north, and includes the communities of Camp River, Chilliwack Mountain, Downtown Chilliwack, East Chilliwack, Fairfield Island, Rosedale and Popkum. Downtown Chilliwack is the historical urban centre of the city. Several cultural attractions, such as the Prospera Centre, Chilliwack Cultural Centre and the Eagle Landing Shopping Centre are located there, as well as key government buildings, such as city hall, FVRD offices, and the Provincial Court of British Columbia.

Neighbourhoods on the south side

The south side includes the communities of Atchelitz, Cultus Lake Park, Greendale, Ryder Lake, Sardis, Promontory Heights, Vedder Crossing, and Yarrow. Sardis is the urban core of the south side and is a popular shopping destination. 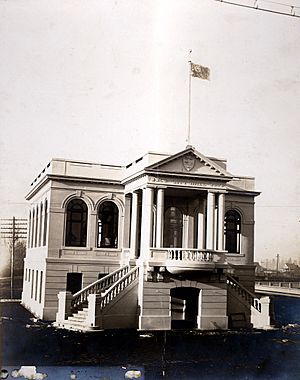 Chilliwack is known for its locally-grown corn. From June until September the farmers take advantage of the sunny weather and produce up to two crops of corn for both human consumption as well as for cattle feed.

The Book Man used bookstore is the second-largest in the Province of British Columbia.

Chilliwack has an active rock music scene, centering mostly around young ska and punk rock bands. Bands originating in Chilliwack include: These Kids Wear Crowns, Mystery Machine, and The Darkest of the Hillside Thickets.

The drumline from Sardis Secondary School played at several venues during the 2010 Winter Olympics in Vancouver.

Chilliwack also offers many other community events and classes throughout the year. The Downtown Chilliwack Business Improvement Association hosts free concerts and activities in the downtown core each Friday evening during the months of July and August, called "Party in the Park". "Music and More" is another free summer event that takes place each Wednesday throughout July and August, with kids' activities at noon and concerts in the evening. This event is presented by numerous local arts groups working together, and the Chilliwack Community Arts Council. Another annual event that is a corn maze, where the public are invited to roam in the farmers' fields when the crops of corn are at their highest.

Despite their name, the band Chilliwack actually formed, and is based, in nearby Vancouver.

The Chilliwack Cultural Centre is a performing arts venue located in downtown Chilliwack. The building is home to the Chilliwack Players' Guild (the resident theatre company), as well as the Chilliwack Academy of Music.

The Chilliwack School of Performing Arts provides pre-professional training in acting, singing and dancing to children ages 3–18 at the North Campus of the University of the Fraser Valley. The mainstage show performs a two-week run every January at the Chilliwack Cultural Centre, and a Spring Festival featuring performances from many age groups at the UFV Theatre in late May.

Annual events and festivals include:

Chilliwack's mild climate with limited extremes provides excellent growing conditions for a wide variety of crops and agricultural products. In fact, when averaged from 1981 to 2010, Chilliwack had the warmest mean temperature for any city in Canada. The highest temperature recorded in Chilliwack was 38.2 °C (100.8 °F) on July 29, 2009, and the lowest recorded temperature was −21.7 °C (−7.1 °F) in 1968. Precipitation falls mostly as rain, with snow limited to the surrounding mountains, except for two or three weeks per year generally in December or January. In 2013, Maclean's reported that, with an average annual temperature of 10.5 °C, Chilliwack is the warmest city in Canada.

Chilliwack receives nearly the same number of days of precipitation (184.6 days at greater than 0.2 mm) as comparable local communities nearer Vancouver such as Maple Ridge (185.8 days) and the City of Mission (186.0 days) (Environment Canada Statistics). Summers in Chilliwack are usually sunny and warm, with long days (light out until well after 10pm in June with dusk that lasts for hours) and with occasionally stretches of heat where temperatures rise above 30 °C (86 °F).

Due to its location at the eastern end of the Fraser Valley, there has been some debate about preserving Chilliwack's air quality. However, the 2011 World Health Organization's study of air quality shows that Chilliwack enjoys air quality among the best in the world. For PM10 (10 µm) size particulates, Canada averaged third best in the world (along with Australia) at an average of 13 micrograms per cubic metre. The City of Chilliwack and the Greater Vancouver Regional District were tied at a low 8.0 MPCM. For smaller particulate of 2.5 µm size (PM2.5), "the City of Chilliwack averaged 4.9 micrograms per cubic metre. Vancouver also had 4.9, Calgary had 5.6, Winnipeg had 5.6, Toronto had 7.9, Montreal had 11.2 and Sarnia had 12.7."

(according to Statistics Canada 2016 census)

CFB Chilliwack was established in 1941 as Camp Chilliwack following Canada's entry into the Second World War in 1939. After the outbreak of the Pacific War the camp was expanded to garrison Canadian Army units for the defense of Canada's West Coast. The base was also a training facility: 112 Canadian Army Basic Training Centre, and A6 Canadian Engineering Training Centre were housed at Chilliwack until the war's end in 1945.

During the Cold War, the base was used as a permanent training facility and the garrison for the Canadian Army units of British Columbia. The base housed the Royal Canadian School of Military Engineering, formerly A6 Canadian Engineering Training Centre and 58 Field Engineer Squadron which was transferred from CFB Esquimalt on Vancouver Island.

Following the unification of the Canadian forces in 1968, the base was renamed Canadian Forces Base Chilliwack (CFB Chilliwack). The base housed the following units:

In 1994, the Princess Patricia's Canadian Light Infantry 3rd Battalion (3PPCLI) was transferred from CFB Esquimalt to CFB Chilliwack, the last unit to be transferred to the base.

Part of CFB Chilliwack became a residential subdivision known as Garrison Crossing, and its training facilities became the Canada Education Park, a campus for a number of post-secondary schools. The Chilcotin Training Area, better known as Area C, is still operational and is part of Western Area Training Centre (WATC). Area C is used by the Primary Reserves units of British Columbia for field training and for the use of its firing ranges. The ASU is also used by Cadets for field training. The ASU also houses supply depots for the Canadian Army units of 39 Canadian Brigade Group, and the cadet units of BC. The old quartermaster warehouse is now the Canadian Military Education Centre Museum. 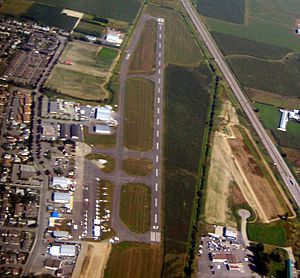 Chilliwack Airport is a small regional airport located in Downtown Chilliwack. It has 1,219 m (3,999 ft) of paved and lit runway that includes a parallel taxiway. Approximately 70% of the estimated 60,000 annual air traffic movements are itinerant traffic that consists of both pilot training and recreational flights from all around BC and south of the border.

There are about 175 km (109 mi) of bike lanes throughout the city with additional lanes being added every year.

Trans-Canada Highway at dawn in Chilliwack

A four-lane expressway from Horseshoe Bay to Hope runs through Chilliwack on the Lower Mainland section of the Trans-Canada Highway.

The Agassiz-Rosedale Highway is a north-south route in the eastern part of Chilliwack that acts as the last connection between Highways 1 and 7 eastbound before Hope, and is the main access to the resort village of Harrison Hot Springs. The highway first opened in 1953, originally going between Yale Road in Rosedale and Highway 7, with a ferry across the Fraser River. A bridge for Highway 9 across the Fraser opened in 1956. When the section of Highway 1 east of Chilliwack opened in 1961, Highway 9 was extended south to a junction with the new Highway 1 alignment, which replaced Yale Road as the main route between Chilliwack and Hope. 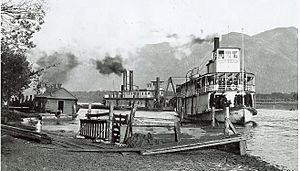 Chilliwack Transit System consists of a fleet of 9 buses that operate along regularly scheduled routes throughout the metropolitan area.

All content from Kiddle encyclopedia articles (including the article images and facts) can be freely used under Attribution-ShareAlike license, unless stated otherwise. Cite this article:
Chilliwack Facts for Kids. Kiddle Encyclopedia.