Michael Andrew Fox OC (born June 9, 1961), known professionally as Michael J. Fox, is a Canadian-American| actor. He starred in the Back to the Future trilogy where he portrayed Marty McFly. Other notable roles have included Mike Flaherty on the ABC sitcom Spin City (1996–2000) and his portrayal of Alex P. Keaton on the American sitcom Family Ties. He has won five Primetime Emmy Awards, four Golden Globe Awards, a Grammy Award and two Screen Actors Guild Awards.

Fox was diagnosed with Parkinson's disease in 1991 at age 29, and disclosed his condition to the public in 1998. He partly retired from acting in 2000 as the symptoms of his disease worsened. He has since become an advocate for research toward finding a cure; he created the Michael J. Fox Foundation, and Sweden's Karolinska Institutet gave him an honoris causa doctorate on March 5, 2010 for his work advocating a cure for Parkinson's disease.

Since 1999, Fox has mainly worked as a voice-over actor in films such as Stuart Little and Disney's Atlantis: The Lost Empire. On the CBS TV show The Good Wife, he earned Emmy nominations for three consecutive years for his recurring role as crafty attorney Louis Canning. He has also taken recurring guest roles and cameo appearances in Boston Legal, Scrubs, Curb Your Enthusiasm, Rescue Me, and Designated Survivor. He has released the Lucky Man: A Memoir (2002), Always Looking Up: The Adventures of an Incurable Optimist (2009), and A Funny Thing Happened on the Way to the Future: Twists and Turns and Lessons Learned (2010). He was appointed an Officer of the Order of Canada in 2010. He also was inducted into Canada's Walk of Fame in 2000. 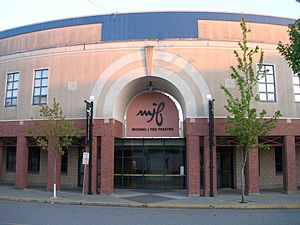 Fox at the Theatre Burnaby South Secondary School in Burnaby

Fox married actress Tracy Pollan on July 16, 1988 at West Mountain Inn in Arlington, Vermont. The couple have four children: son Sam Michael (born May 30, 1989), twin daughters Aquinnah Kathleen and Schuyler Frances (born February 15, 1995), and daughter Esmé Annabelle (born November 3, 2001). He holds dual Canadian-US citizenship. He provided a light-hearted segment during the 2010 Winter Olympics' closing ceremony in Vancouver, British Columbia on February 28, 2010 when he expressed how proud he is to be Canadian. On June 4, 2010, the city of Burnaby, British Columbia granted him the Freedom of the City. He and his family live in Manhattan. 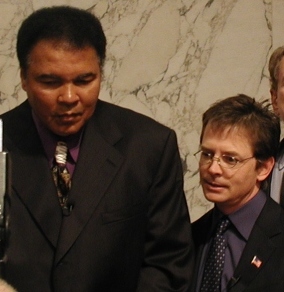 Fox manages the symptoms of his Parkinson's disease with the drug carbidopa/levodopa, and he also had a thalamotomy in 1998.

His first book, Lucky Man, focused on how, after seven years of denial of the disease, he set up the Michael J. Fox Foundation, stopped drinking and began to be an advocate for people living with Parkinson's disease.

All content from Kiddle encyclopedia articles (including the article images and facts) can be freely used under Attribution-ShareAlike license, unless stated otherwise. Cite this article:
Michael J. Fox Facts for Kids. Kiddle Encyclopedia.