Canada's Walk of Fame (French: Allée des célébrités canadiennes) in Toronto, Ontario, Canada, is a walk of fame that acknowledges the achievements and accomplishments of Canadians who have excelled in their respective fields.

It is a series of maple leaf-like stars embedded in 13 designated blocks' worth of sidewalks in Toronto in front of Roy Thomson Hall, The Princess of Wales Theatre, and The Royal Alexandra Theatre on King Street as well as Simcoe Street.

The first group of members was inducted in 1998, and to date 173 Canadians have been inducted into Canada's Walk of Fame. These inductees include: activists; scientists; philanthropists; athletes; coaches; actors, directors, writers and producers of movies, television and stage; singers, songwriters and musicians; playwrights; authors; comedians; cartoonists; models; and luminaries in other fields. 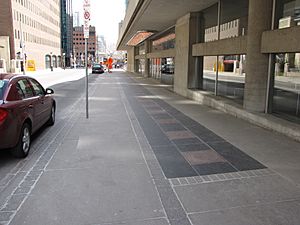 A line of stars along Simcoe Street

The Walk of Fame was first conceived in 1996 when co-founder Peter Soumalias, suggested the idea of a Walk of Fame for famous Torontonians to the board of the Toronto Entertainment District Association. They rejected his idea, but he went on to establish a Walk of Fame for Canadians in partnership with Bill Ballard, Dusty Cohl and Gary Slaight. In spite of a lack of funds, research and no media plan, the first class of inductees was inducted in 1998. Canada's Walk of Fame has become a popular tourist attraction in Toronto, and has been named the number one Canadian recognition event.

See also: List of inductees of Canada's Walk of Fame 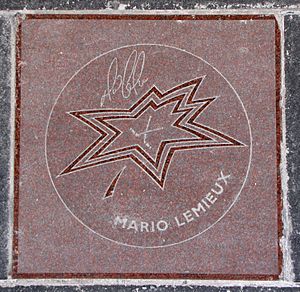 Nominations for potential inductees are accepted from the public year-round, culminating with their National Nomination Promotion during the month of April. In 2000, prior to the introduction of the online voting system, over 30,000 nominations were received via letters, fax and e-mail. Now submissions are accepted on the official Canada's Walk of Fame website and thousands of nominations are received every year, which are then sent to selection committee for consideration.

The committee then analyzes the nominees based on the following criteria: the nominee was born in Canada or has spent their formative or creative years in Canada; they have had a minimum of 10 years experience in their field; they have had a national or international impact on Canada's Cultural heritage. Following the Selection Committee's evaluation, the nominees that meet all of the requirements are forwarded to the board of directors, who then select the inductees.

The process differs greatly from that of the Hollywood Walk of Fame. The Hollywood version allows only celebrities of the silver screen, television, radio, live theatre and singers/musicians, while Canada's Walk allows people of more diverse occupations, as listed above. While most celebrities on the Hollywood Walk of Fame are American or have achieved their fame in the United States, Canada's Walk of Fame is exclusive to Canadians. For someone to receive a star on the Hollywood Walk of Fame, they must be nominated by a sponsor who must agree to field the approximately $25,000 cost of installing a star. From there, the names are submitted to a nominating committee of five people, who pick 10–15 names to award stars to annually. The only criteria for it are: "professional achievement, longevity of five years or more, contributions to the community and the guarantee that the celebrity will attend the dedication ceremony if selected."

Canadian stars are inducted in an annual group ceremony; while the Hollywood Walk of Fame rarely inducts more than two major stars at a time. Celebrities can have more than one star on the Hollywood Walk, the same celebrity can receive as many as five stars under the various categories. This does not happen with Canada's Walk of Fame, although some may have an individual star but are also included as part of a larger group, such as John Candy, Martin Short, Eugene Levy and Catherine O'Hara who have their own star but also were in Second City Television. 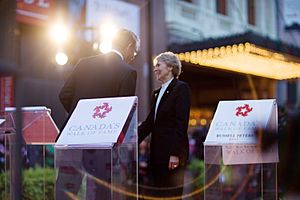 Roberta Bondar receives her star during the 2011 induction ceremony.

New inductees are inducted annually at an unveiling ceremony where their star, a stylized maple leaf, is revealed. The first was held in 1998 and only four of the twelve living inductees attended: Karen Kain, Norman Jewison, Barbara Ann Scott and Rich Little. The 2007 ceremony was held at Toronto's Hummingbird Centre, was attended by all seven inductees and was hosted by Eugene Levy.

Established in 2008, the Cineplex Legends Award is posthumously awarded to "Canadian pioneers in film, music, sport, arts, and innovation." Sponsored by Cineplex Entertainment, the first recipients of the award were siblings Norma and Douglas Shearer. The award recipients are also given stars on the Walk of Fame.

First awarded in 2010, the Allan Slaight Honour, named after the leading figure in the Canadian radio industry, is awarded to a young Canadian for "making a positive impact in the fields of music." Recipients receive an honorarium of $10,000 from the Slaight Foundation, but are not considered inductees of the Walk of Fame. So far, recipients of the Slaight award have been Nikki Yanofsky, Drake, Melanie Fiona, Carly Rae Jepsen, the Weeknd, Shawn Mendes, Brett Kissel, Shawn Hook, Jessie Reyez and Alessia Cara.

The Canada's Walk of Fame Festival was established in 2010. The festival spans 3 days, culminating with the Canada's Walk of Fame Awards Show. Since its inaugural year, the festival has included musical performances from Canadian artists such as Sarah McLachlan, Serena Ryder, Crystal Shawanda, Tom Cochrane and Melanie Fiona. In addition to the musical performances, the festival has included both screenings of Canadian films, as well as comedy programming from Canadian comedy acts.

In 2012, in partnership with RBC, Canada's Walk of Fame launched the RBC Emerging Artist Music Mentorship Prize competition. Valued at more than $100,000, the initiative aims to support the next generation of gifted Canadian musicians. Aspiring young musicians are asked to submit a 60 sec. musical audio or video performance for their chance to win the Grand Prize of $25,000 cash, recording time, performance opportunities and much more. Taylor Kurta was the competitions inaugural Grand Prize Winner. The 2014 RBC Emerging Artist Music Mentorship Prize was awarded to NEFE (Sarah Felker) from Guelph, ON.

All content from Kiddle encyclopedia articles (including the article images and facts) can be freely used under Attribution-ShareAlike license, unless stated otherwise. Cite this article:
Canada's Walk of Fame Facts for Kids. Kiddle Encyclopedia.