Granite Falls is a city in Snohomish County, Washington, United States. The population was 3,364 at the 2010 census.

Before the arrival of European settlers, the area that is now Granite Falls was used by Natives to portage their canoes between fishing grounds.

The first permanent European settler was Joseph Sous Enas, who staked a homestead claim on land south of the present city. It then became a railroad station on the route between Monte Cristo (now a ghost town) and Everett. The city was officially incorporated on December 21, 1903. He was quickly followed by other homesteaders, benefiting from "the Big Burn", a forest fire that cleared the heavily forested land and made it easier for settlers to stake claims.

By 1896, there were enough residents to petition the state of a school district (Granite Falls District #1)

The finding of gold and other minerals in 1889 in the Cascade Mountains East of Granite Falls was a boon to Granite Falls. Mines needed a railroad and the settlers of Granite Falls stepped up to provide railroad ties cut from the nearby forests, supplies for fortune seeking miners, a doctor, and other necessities. In 1890, a post office was opened and the first commercial establishments opened on what is now South Granite Ave and Pioneer.

The Everett and Monte Cristo Railroad came to town in 1892 from its start in Hartford, Washington (near today's Lake Stevens) and through to its terminus at Monte Cristo. Partially funded by John D. Rockefeller and others, the train carried supplies, passengers, and ore up and down the Stilly Valley.

The Granite Falls townsite was platted in 1891 from portions of the Wright and Anderson homesteads and in 1903, Granite Falls was incorporated as a city. Electricity, sewers, sidewalks, telephones, cars, and all the amenities of modern life soon followed.

By World War 1, the once bustling mining towns of Monte Cristo and Silverton were no longer shipping out ore. The railroad, now owned by Northern Pacific, stopped running and the tracks were torn out in the early 1930s to make way for the Mt. Loop Highway.

Granite Falls between the world wars was a lumber town; logging companies felled trees, sawmills created lumber and shingle mills created shingles. The Great Depression, however, took its toll. By 1935, the population of Granite Falls was half what it was in 1925. Mills closed and people left to find work elsewhere. At the end of World War II, things looked bleak. The opening of Miller Shingle in 1946 (now the country's largest specialty lumber mill) meant jobs both in the woods and at the mill. Construction booms through Snohomish and King counties also meant jobs at the gravel pits dotted around Granite Falls.

Hard times would come again. In 1986, the United States Forest Service severely limits logging in old-growth forests under its protection in an effort to save the Northern Spotted Owl from extinction. In June, 1990, the U.S. Fish and Wildlife Department declared the spotted owl an endangered species, and in 1991, a federal court judge ruled the Forest Service's logging plan to save the owl was inadequate. Over one-fourth of old-growth forest on both public and private land was now off-limits to logging.

In the 21st Century, Granite Falls is focused on attracting more visitors to the stupendous beauty and recreational opportunities along the Mt. Loop Highway. Expanded housing development has brought an increased population of families who commute to Everett, Seattle, and the Eastside to work. In 2001, the Tsubaki Grand Shrine of America was given a 17-acre plot of land next to Kannagara Jinja (built by the Reverend of the shrine) in Granite Falls, which was built upon, combining the two places.

It is situated where the South Fork of the Stillaguamish River (Stilly) leaves its narrow mountain valley. The Pilchuck River runs near the city, too. The area where the city was founded was called the "portage" by native tribes in the area, who used the flat area between the two rivers to portage their canoes when traveling.

The climate in this area has mild differences between highs and lows, and most of the rainfall occurs between October and May. Temperatures in the summer can be up to 10 degrees warmer than nearby Everett, due to it's slightly inland location. According to the Köppen Climate Classification system, Granite Falls has a marine west coast climate, abbreviated "Cfb" on climate maps.

There were 1,222 households of which 42.5% had children under the age of 18 living with them, 49.5% were married couples living together, 12.5% had a female householder with no husband present, 6.0% had a male householder with no wife present, and 32.0% were non-families. 25.6% of all households were made up of individuals and 10.3% had someone living alone who was 65 years of age or older. The average household size was 2.75 and the average family size was 3.33. 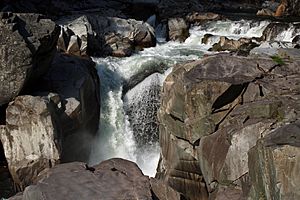 The eponymous waterfall on the Stillaguamish River

There were 846 households out of which 45.9% had children under the age of 18 living with them, 55.7% were married couples living together, 10.6% had a female householder with no husband present, and 29.7% were non-families. 23.8% of all households were made up of individuals and 7.0% had someone living alone who was 65 years of age or older. The average household size was 2.77 and the average family size was 3.31.

Each year, the Granite Falls community celebrates holidays and holds special events. Below is a list of annual events.

All content from Kiddle encyclopedia articles (including the article images and facts) can be freely used under Attribution-ShareAlike license, unless stated otherwise. Cite this article:
Granite Falls, Washington Facts for Kids. Kiddle Encyclopedia.