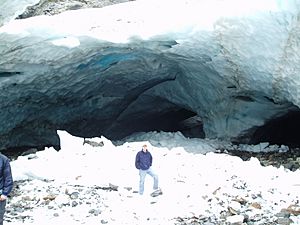 Big Four Mountain is a mountain in the Cascade Range of Washington, located 21 miles (34 km) east of Granite Falls. The mountain is about 6,180 ft (1,880 m) high. At the bottom of its steep, 4,200 ft (1,300 m) high north face, debris piles form from avalanches and are able to remain there year round because of the continuous shade provided by the mountain. At an elevation between 2,450 ft (750 m) and 1,950 ft (590 m), this ice forms the lowest-elevation glacier in the lower 49 states. During the summer, snow-melt streams flow beneath the debris piles and cause caves to be formed in the ice. 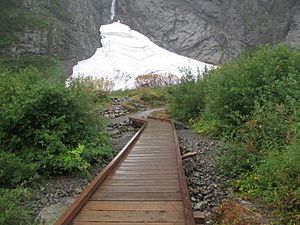 A severe autumn storm in November 2006 caused flooding of the South Fork Stillaguamish River destroying a major footbridge to the Big Four Ice Caves. Estimated repair costs to replace the damaged span were approximately $425,000, and repairs were completed in June 2009. While the trail is open to the public, the snowfield itself was closed temporarily due to cave-ins and slides which have killed four hikers in incidents in 1998, 2010, and in 2015. Because of the danger, hikers are advised to stay out of the caves.

All content from Kiddle encyclopedia articles (including the article images and facts) can be freely used under Attribution-ShareAlike license, unless stated otherwise. Cite this article:
Big Four Ice Caves Facts for Kids. Kiddle Encyclopedia.