The Boeing Everett Factory is an airplane assembly facility built by Boeing in Everett, Washington, United States. It sits at the northeast corner of Paine Field and includes the largest building in the world by volume at 13,385,378 m3 (472,370,319 cu ft) and covers 98.7 acres (39.9 ha). The entire complex spans both sides of State Route 526 (named the Boeing Freeway). The factory was built in 1967 for the Boeing 747 and has since been expanded several times to accommodate new airliners, including the 767, 777, and 787 programs.

Boeing has had a presence in Everett since 1943. In 1966, plans for a factory in the area to be the site of the construction of the 747 were first announced, after Boeing was awarded a contract worth US$525 million (equivalent to $3447.07 million in 2018) from Pan American World Airways to build 25 of the aircraft. The company purchased 780 acres (320 ha) north of the then little-used Paine Field, which was operated by the U.S. Army during World War II. The factory was officially opened on May 1, 1967, four months after the first workers had arrived to start construction of the 747.

Boeing began offering factory tours with the first rollout of the 747 in 1968. As of 2020 over 150,000 people come each year to visit the factory, which employs over 30,000 people and has its own fire department, security team, daycare center, coffee shop, and fitness center. The factory also houses a Boeing Employees' Credit Union branch and several cafés. Across the airport to the west is The Boeing Store, a theater, and the Future of Flight Aviation Center, which runs the factory tour. The Boeing Everett campus is big enough to contain Disneyland with 12 acres (4.9 ha) left over for parking. 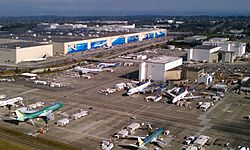 Boeing's Everett facility. The main production building is seen in the background to the left.

The Boeing 747 is a large-size, long-range wide-body four-engine jet airliner. The 747-8I, the current passenger variant in production, is capable of carrying 467 passengers in a typical three-class configuration, has a range of 8,000 nmi (9,200 mi; 15,000 km) and a cruising speed Mach 0.855 (570 mph, 918 km/h, 495 kn). The Boeing 747 was one of the first wide-body aircraft to be produced and was the first jet to use a wide-body configuration for carrying passengers. Because of the vast size of the 747, the Boeing Everett Factory was designed and built to accommodate the assembly of these large planes as there was not enough room at the Boeing facilities in Seattle. Production of this aircraft began in 1967 and continues to this day.

The only 747 variant currently in production is the Boeing 747-8.

These are the 767 variants currently in production: 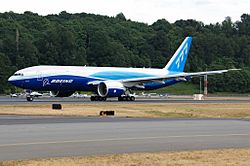 A Boeing 777 Freighter before a test flight

These are the 777 variants currently in production: 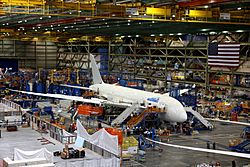 In February 2011, Boeing announced that some 787 work was being moved to a plant in North Charleston, South Carolina in order to relieve overcrowding of 787s at Everett caused by large volumes of 787 orders. In July 2014, Boeing announced that the 787-10 variant, the longest variant of the 787, would be produced exclusively in South Carolina as the fuselage pieces for that variant are too large for the Dreamlifter to fit for transport to Everett. In early 2020, Boeing announced that it would consider consolidating all of its 787 assembly in a single location. It chose to move all production to South Carolina on October 1, 2020, causing backlash from the Washington state government.

These are the 787 variants currently in production in Everett:

Aircraft are delivered as a whole from the Paine Field Snohomish County Airport, adjacent to and south of the plant.

All content from Kiddle encyclopedia articles (including the article images and facts) can be freely used under Attribution-ShareAlike license, unless stated otherwise. Cite this article:
Boeing Everett Factory Facts for Kids. Kiddle Encyclopedia.