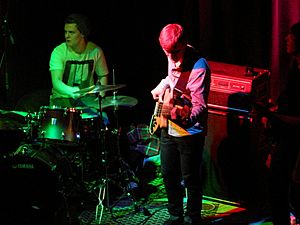 Jam sessions may be based upon existing songs or forms, may be loosely based on an agreed chord progression or chart suggested by one participant, or may be wholly made in the moment. Jam sessions can range from very loose gatherings of amateurs to evenings where a jam session has a coordinator to ensure that only appropriate-level performers take the stage.

One source for the phrase "jam session" came about in the 1920s when white and black musicians would get together after their regular paying gigs, to play the jazz they could not play in the style for the bands they worked in. When Bing Crosby would attend these sessions, the musicians would say he was "jammin' the beat", since he would clap on the one and the three. Thus these sessions became known as "jam sessions".

All content from Kiddle encyclopedia articles (including the article images and facts) can be freely used under Attribution-ShareAlike license, unless stated otherwise. Cite this article:
Jam session Facts for Kids. Kiddle Encyclopedia.