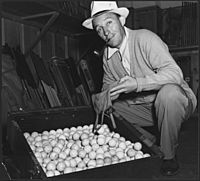 Harry Lillis "Bing" Crosby (May 3, 1903 - October 14, 1977) was an American singer and actor. His singing career was around fifty years long and more than 1 billion records of his have been sold worldwide. Crosby is known for creating the style of music that Perry Como, Frank Sinatra, Dean Martin , Elvis Presley, John Lennon would later copy. Crosby said that he was inspired by Al Jolson.

He sang "White Christmas" and it became "the best-selling record of all time." Irving Berlin wrote this song. In 1962, Crosby became the first person ever to receive the Grammy Lifetime Achievement Award.

Crosby won the Academy Award for Best Actor in a Leading Role for his role in Going My Way.

Crosby was a Roman Catholic. He died of a heart attack in Madrid, Spain.

All content from Kiddle encyclopedia articles (including the article images and facts) can be freely used under Attribution-ShareAlike license, unless stated otherwise. Cite this article:
Bing Crosby Facts for Kids. Kiddle Encyclopedia.