The event was originally known as the Bing Crosby National Pro-Amateur, or just the Crosby Clambake. After Crosby's death in 1977, the tournament was hosted by his family for eight years. The Crosby name was dropped after the 1985 event, and AT&T Corporation became the title sponsor 36 years ago in 1986. It is organized by the Monterey Peninsula Foundation.

Founded 85 years ago in 1937, entertainer Bing Crosby hosted the first National Pro-Am Golf Championship in southern California at Rancho Santa Fe Golf Club in San Diego County, the event's location prior to World War II. Sam Snead won the first tournament, then just 18 holes, with a winner's share of $500. A second round was added in 1938 and was played through 1942.

After the war, it resumed in 1947 as a 54-hole event, up the coast on golf courses near Monterey, where it has been played ever since. Beginning that year, it was played at Pebble Beach Golf Links, Cypress Point Club, and Monterey Peninsula Country Club through 1966. The tournament became a 72-hole event in 1958.

In 1967, the new Spyglass Hill replaced Monterey Peninsula CC as the third course (with the exception of 1977, when it returned to MPCC). After 1990, private Cypress Point was dropped by the PGA Tour because it would not admit an African-American member, and was replaced by Poppy Hills in 1991, which hosted through 2009. Poppy Hills was not well received by the players, primarily due to poor drainage, and MPCC returned to the rotation in 2010.

The tournament continues to be a success every year despite the rainfall that often occurs, notably in 1996, 1998, and 1999 (see Format section below).

There is a similar celebrity pro-am event on the European Tour; the Alfred Dunhill Links Championship in Scotland.

Gene Littler holds a unique record in this event. When he won the 1975 event, it marked the only time that a player had won this particular event as a professional after having previously been the amateur on the winning pro-am team which Littler did as a 23-year-old amateur in 1954. 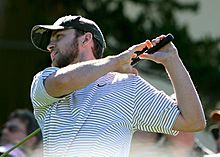 The starting field consists of 156 professionals and 156 amateurs. Each professional is paired with an amateur player. On the first three days 156 two-man teams will play a better ball format with one round on each of the three courses. The pros also play an individual stroke play format. On the final day, those professionals and pro-am teams making the 54-hole cut will play on the Pebble Beach Golf Links.

Only professionals may compete in the individual competition part of the tournament. Amateurs are restricted to playing only in the pro-amateur team competition. The local Pebble Beach tournament officials organize the pairing of professionals with amateurs, while the PGA Tour manages the assignment of the pros' tee times.

The professional field consists of 156 players selected using the standard eligibility rankings except that the following shall first be eligible:

There is no open qualifying for this tournament.

Conducted as a planned 72-hole pro-am event, 1958–present. Exceptions are as follows:

Thirteen players have won this tournament more than once through 2020.