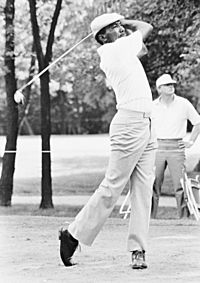 Calvin Peete (July 18, 1943 – April 29, 2015) was an American professional golfer. He was the most successful African-American on the PGA Tour, with 12 wins, before Tiger Woods. Peete was born in Detroit, Michigan.

All content from Kiddle encyclopedia articles (including the article images and facts) can be freely used under Attribution-ShareAlike license, unless stated otherwise. Cite this article:
Calvin Peete Facts for Kids. Kiddle Encyclopedia.