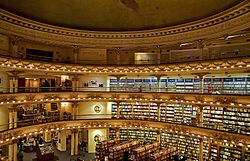 A book store in Buenos Aires

A bookstore is a store that sells books, and where people can buy them. A used bookstore or second-hand bookshop sells and often buys used books.

All content from Kiddle encyclopedia articles (including the article images and facts) can be freely used under Attribution-ShareAlike license, unless stated otherwise. Cite this article:
Bookstore Facts for Kids. Kiddle Encyclopedia.