The Price is Right facts for kids 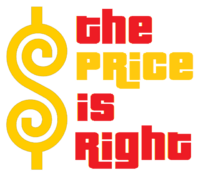 The logo of the show.

The Price is Right is a USA game show on CBS. The current version started in 1972, and was hosted by Bob Barker for a long time. However, in 2006, Bob Barker announced that he would leave the show. His last episode aired in June 2007. Comedian Drew Carey is now the host; his first episode aired in October 2007.

In this game, a person uses his shopping skills to correctly guess the price of different products, like in a market. Some products are simple household items, like toothpaste and vitamins. Other items are more expensive products, like furniture and cars. After the third and sixth games, the "Showcase Showdown" is played. The three players who got on stage in both halves of the show spin a wheel. They get two spins of the wheel. They have to be closest to $1.00 without going over. The person with the highest total moves on to the Showcase at the end of the show. If a player gets $1.00, they win $1,000 and get another spin. If they hit the $1.00 space on that spin, they win another $25,000. If they hit the 5¢ or 15¢ space, they win another $10,000. In the Showcase, the winners of the two Showcase Showdown games are shown prize packages. They make a bid on them, and whoever comes closest to the price of their showcase without going over wins it. If they are $250 or less from the price of their showcase, they win both showcases. If someone's bid was higher than the price of the real price, that person went over, and was disqualified from winning in that round.

Three nighttime syndicated versions of the show aired. The first one aired from 1972 to 1980. Until 1977, it was hosted by Dennis James. For the rest of its run, it was hosted by Bob Barker. From 1985 - 1986, another nighttime version of the show, named The Nighttime Price Is Right, was made and was hosted by Tom Kennedy. A third nighttime version, The New Price Is Right, was made from 1994 - 1995 and was hosted by Doug Davidson. Also special million dollar prime-time episodes where people could play different versions of games for $1,000,000 were made due to CBS shows being canceled.

All content from Kiddle encyclopedia articles (including the article images and facts) can be freely used under Attribution-ShareAlike license, unless stated otherwise. Cite this article:
The Price is Right Facts for Kids. Kiddle Encyclopedia.