The history of Monroe is intertwined with that of the Great Northern Railway which pushed over the Cascade Range at Stevens Pass and worked its way down the Skykomish River Valley.

Prior to that time the main settlement in the area had been located about one mile west of where the downtown eventually grew up and was known as Park Place. However, the city's merchants relocated when the railroad survey was completed to have better access to the new transportation corridor. The new development was originally known as Tye City, but became Monroe when Park Place's main store, the one containing the U.S. Post Office, relocated and took up the name "Monroe at Park Place" in honor of James Monroe, the nation's fifth president. Because the U.S. Postal Department would not allow any new post offices to use double names, the post office, and eventually the town, became known simply as "Monroe."

By 1893 the city had become an important stop on the rail line and was best known for the GN Greenhouses, which grew flowers for the passengers to purchase. That same year, Snohomish County built the County Poor Farm where today's Evergreen State Fairgrounds are located; the city's first hospital was built where Valley General Hospital stands today. 1894 saw the construction of the first high bridge over the Skykomish River and 1896 the construction of the first church. In 1899 the grammar school was relocated from its old site in Park Place to a new site in Monroe and the town's newspaper, The Monroe Monitor, began publication on January 14 of the same year. On September 16, 1901 a fire destroyed the only complete block of business in the city. The city was shaken by that, but quickly built back up. Nowadays, the town of Monroe has a population of 17,286 residents, with thriving small businesses. On the old area of Park Place is Park Place Middle School, there for its dedication. The town of Monroe contains a small little library, and the Monte Cristo Railroad crosses through it. 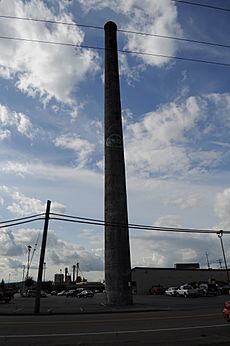 The economic area of the city saw a series of development as well. While the city was still in its infancy, many sawmills were constructed to take advantage of the area's old growth cedar and cedar shakes became the main product. However, as the timber played out and the logging industry slowly moved away, agriculture became the area's new industry and berry farms began to flourish. Because of the lush valley grasses, dairy farms too moved into the area and soon several creameries began production. Evidence of this industry can still be seen today as the giant smokestack of the Carnation Condensery, a factory which was destroyed by fire in the 1940s, still stands in the middle of what is today a grocery store parking lot at the intersection of Main Street and US Route 2. It is a lone reminder of this forgotten industrial era and, despite its age, it remains much taller than any other structure in the city. 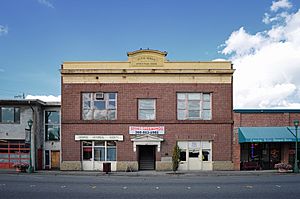 The City of Monroe officially voted to incorporate on December 20, 1902 and the new city counted 325 people in its population. In 1910, around the same time as the construction of the Carnation Condensery, Washington State chose Monroe as the site of the Washington State Reformatory.

The Great Depression struck Monroe as it did elsewhere in the nation and much of the town's industry closed down. As a result, the city fathers applied for national funds and established programs to help the town. The funds built a school, which can still be seen on Main Street, as well as road improvements. In 1941, the first fair was held in Monroe, known as the Cavalcade of the Valleys, at the County Poor Farm. Although interrupted by World War II, the fair resumed in 1946 with the help of many local residents such as Mr. and Mrs. Shine Peters, then owners of Monroe Floral, who helped plant all the flowers shrubs and trees that decorated the grounds from their nursery. Local farmers and Grange members' contributions helped establish many traditions the Evergreen State Fair continues to take pride in. The annual fair remains an important part of the city's culture today. 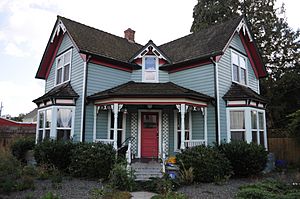 This old house near the center of Monroe was once used as an antique shop.

After the depression and war, industry did not return to the city and the town became ever more oriented towards agriculture. It continued to grow, albeit slowly, throughout much of the 1950s and '60s. In April 1965 a major earthquake struck Western Washington and the original Monroe High School and its annex were so severely damaged that they later had to be demolished. The new high school opened in 1968 and served the city until a new, larger high school had to be built in 1999.

In the early 1970s Monroe became the terminus for State Route 522 (Originally SR202, before being realigned into SR522), which offers a more direct connection to Interstate 405 and larger cities to the south. This has opened the city up and helped to establish it as a true bedroom community. The highway meets up with U.S. Route 2 in the town and the intersection is often filled with intrastate traffic. 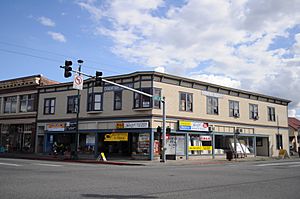 The Doloff-Key building at the very center of old Monroe, the corner of Main and Lewis Streets, dates back to 1901. Pictured here in 2009.

During the first decade of the 21st century, Monroe saw growth in unexpected new proportions as many large strip malls and major retailers have built new complexes along Highway 2. The city's residential areas have greatly expanded as well and the highway has become the scene of major gridlock, especially during summer months and major holidays. At the time of this writing, a bypass is being considered but no firm plans have been agreed upon.

The new developments have added to the city and the influx of people into the surrounding area has changed, but not erased much of the city's charm. The old part of town stands much as it always has, on Main Street away from the busy highway, and has managed to preserve much of its small town character. Trains still regularly pass through the town on their way across Stevens Pass and the sound of their horns is a common feature of life in the city.

Since 2007, Monroe's Old Town district has begun a revitalization program.

The climate in this area has mild differences between highs and lows, and there is adequate rainfall year-round. According to the Köppen Climate Classification system, Monroe has a warm-summer Mediterranean climate, abbreviated "Csb" on climate maps. 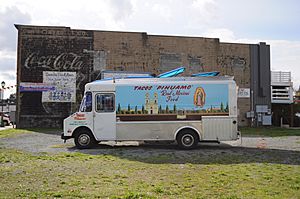 There were 5,024 households of which 46.6% had children under the age of 18 living with them, 54.0% were married couples living together, 11.4% had a female householder with no husband present, 6.3% had a male householder with no wife present, and 28.3% were non-families. 21.8% of all households were made up of individuals and 8.9% had someone living alone who was 65 years of age or older. The average household size was 2.92 and the average family size was 3.41.

There were 4,173 households out of which 45.7% had children under the age of 18 living with them, 57.8% were married couples living together, 10.5% had a female householder with no husband present, and 26.7% were non-families. 20.6% of all households were made up of individuals and 8.6% had someone living alone who was 65 years of age or older. The average household size was 2.83 and the average family size was 3.26.

All content from Kiddle encyclopedia articles (including the article images and facts) can be freely used under Attribution-ShareAlike license, unless stated otherwise. Cite this article:
Monroe, Washington Facts for Kids. Kiddle Encyclopedia.