The Snohomish River is a river in Snohomish County the U.S. state of Washington, formed by the confluence of the Skykomish and Snoqualmie rivers near Monroe. It flows northwest entering Port Gardner Bay, part of Puget Sound, between Everett and Marysville. The Pilchuck River is its main tributary and joins the river at Snohomish. The river system drains the west side of the Cascade Mountains from Snoqualmie Pass to north of Stevens Pass. 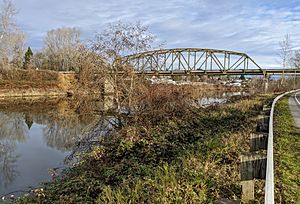 Route 9 bridge, with downtown Snohomish behind 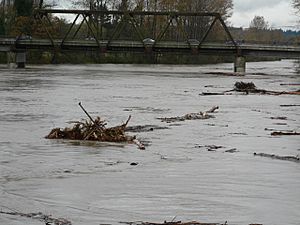 Debris in the November 2006 flood is swept under the Airport Way Bridge in Snohomish.

The Snohomish River forms at the confluence of the Snoqualmie and Skykomish Rivers just west of Monroe. Both of these rivers originate in the Cascades and drain the west slopes of the mountains in southeastern Snohomish County and northeastern King County. The Snohomish River flows generally northwestward from the confluence, passing under state route 522 and flowing alongside Lord Hill Park before reaching downtown Snohomish. Here, it is joined by the Pilchuck River, its main tributary, and flows under state route 9. From Snohomish, the river continues northwestward through a broad floodplain, forming the eastern boundary of the city of Everett. The final few miles of the river in Everett form the Snohomish River estuary, a river delta that features wetlands and tideflats spread out across various islands and arms of the river. Several bridges carry U.S. 2, Interstate 5, and state route 529 across the delta. The river then empties into Possession Sound, which is part of Puget Sound, between Everett and Marysville.

Panoramic view of the Snohomish River from downtown Snohomish

All content from Kiddle encyclopedia articles (including the article images and facts) can be freely used under Attribution-ShareAlike license, unless stated otherwise. Cite this article:
Snohomish River Facts for Kids. Kiddle Encyclopedia.