The Skykomish River is a 29-mile (47 km) long river in the U.S. state of Washington which drains the west side of the Cascade Mountains in the southeast section of Snohomish County and the northeast corner of King County. The river starts with the confluence of the North Fork Skykomish River and South Fork Skykomish River approximately one mile west of Index, then flowing northwesterly towards Puget Sound. It is joined by the Sultan River and the Wallace River at Sultan. It then meets the Snoqualmie River to form the Snohomish River at Monroe. The Snohomish River continues along the river valley eventually dumping into Port Gardner Bay on Possession Sound (part of Puget Sound).

U.S. Highway 2 and the BNSF Railway are routed to follow the Skykomish River, South Fork Skykomish, and Tye River to Stevens Pass and the Cascade Tunnel.

The Skykomish is sometimes referred to by the nickname "Sky River" or "The Sky".

The name "Skykomish" comes from the Northern Lushootseed word /sq'íxʷəbš/, meaning "upriver people", from /q'íxʷ/, "upstream". It is the name of a Southern Coast Salish group.

The headwaters of the North Fork Skykomish River are located in the Henry M. Jackson Wilderness near Dishpan Gap along the Pacific Crest Trail. It flows as a small stream off the north slope of Skykomish Peak. The Wild Sky Wilderness protects tributaries and forests adjacent to the North Fork Skykomish, although not the river itself. The river flows generally in a southwestern direction from its source to its mouth. Just before picking up Goblin Creek, the river flows through a short but impressive canyon and within that canyon the river drops over Deer Falls. A short ways down from that, the river flows through an even shorter but very twisted and unusually shaped canyon at Bear Creek Falls.

Tributaries of the North Fork

The South Fork Skykomish River begins at the confluence of the Tye River and the Beckler River, to the east of Skykomish. From the confluence the South Fork flows northwest. Near the eastern boundary of the city of Skykomish, the Beckler River joins it. To the west of the city of Skykomish, the Miller River joins it. Shortly before converging with the North Fork the river drops over Eagle Falls, followed by Canyon Falls and then, finally, Sunset Falls before its confluence with the North Fork.

Tributaries of the South Fork 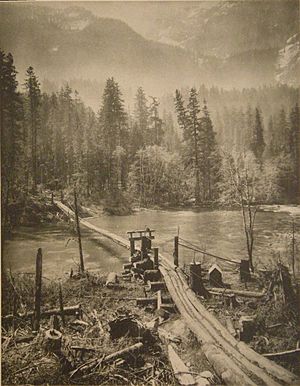 Loggers' bridge on the Skykomish (1910). Photo by Asahel Curtis.

In the 1890s the Great Northern Railway was built along the Skykomish, South Fork Skykomish, and Tye Rivers, crossing the crest of the Cascades at Stevens Pass. Today the track is owned by BNSF Railway, known as the Burlington Northern Railroad from 1970 to 1995. Stevens Pass is named after the Great Northern surveyor John Frank Stevens. Two railroad tunnels, both called Cascade Tunnel, were built at Stevens Pass. The first one was built slightly north of the pass. It was replaced in 1929 with the New Cascade Tunnel, which at 7.8 miles (12.6 km) long was for nearly 60 years the longest railroad tunnel in North America and is still the longest in the United States. The New Cascade Tunnel is a few miles south of Stevens Pass. Its western entrance is near the confluence of Tunnel Creek and the Tye River. A small amount of the water flows out of both tunnels into the Tye River. An interpretive center for the Iron Goat Trail, located at Scenic on the upper Tye River, describes the history of the area including the old railroad and new trail. The interpretive center was built near the site of one of the greatest railroad tragedies in American history, the Wellington Disaster.

One of the Native American trails crossing the Cascades followed the Skykomish and North Fork Skykomish to Cady Pass.

The Skykomish River is used for rafting and kayaking, especially around the Index, WA area during the summer months. The Skykomish River is mostly ranked between Class III and Class III+ rapids, depending on the circumstances and season, but includes Boulder Drop, a class IV+ rapids. Skykomish and its tributaries also popular place for recreational fishing. River is a home for chinook, coho and pink salmon, steelhead and bull trout.

All content from Kiddle encyclopedia articles (including the article images and facts) can be freely used under Attribution-ShareAlike license, unless stated otherwise. Cite this article:
Skykomish River Facts for Kids. Kiddle Encyclopedia.