Kids Encyclopedia Facts
For the river of the same name, see Skykomish River.
Not to be confused with Skokomish, Washington.

Skykomish is a town in King County, Washington, United States. The population was 198 as of the 2010 census, down from an estimated peak of "several thousand" in the 1920s.

Located in the Mount Baker-Snoqualmie National Forest, 49 miles east of Everett, Washington, on the South Fork of the Skykomish River, Skykomish was founded as a railroad town. Today, it is mainly a stopping point for recreational access to the surrounding mountains, including skiing at nearby Stevens Pass.

Being located in the far northeastern corner of King County, mountains deny Skykomish any road access to the rest of the county. Instead, U.S. Highway 2 (known in the area as the Cascade Highway) connects it with Snohomish County to the north and through Stevens Pass (17 miles east of town) to Chelan County.

The name "Skykomish" derives from the Skykomish or Skai-whamish tribe (originally considered a subdivision of the Snoqualmies) who inhabited the area before European settlement. The town of Skykomish was officially incorporated on June 5, 1909.

From the 1890s to 1974, Skykomish was a maintenance and fueling station for the Great Northern Railway, which eventually became part of the Burlington Northern Railroad, and presently the BNSF Railway. It was also once the western terminus for electric operations (1909–56) on the Cascade Tunnel route all the way to Wenatchee. Here, steam or diesel locomotives were changed or coupled to electric locomotives.

Waste disposal practices, common during that era, resulted in the contamination of its soil, its groundwater, and the Skykomish River by oil and heavy metals. BNSF (then BN) and the Washington State Department of Ecology began remediation discussions in the mid-1980s, and in 2006, agreed to a plan whereby the railroad would pay up to $50 million to clean up the area over a three-year period (completed in 2009). This effort involved massive excavations—essentially removing the contaminated soil and replacing it with clean soil—and the rebuilding of a levee. Many of Skykomish's buildings—both homes and business—were moved during the cleanup process.

Panoramic view of downtown Skykomish, 2012. The former Maloneys General Store is straight ahead. Great Northern Depot is at extreme right. Each is on the National Register of Historic Places in its own right, as is the entire historic center of the town. 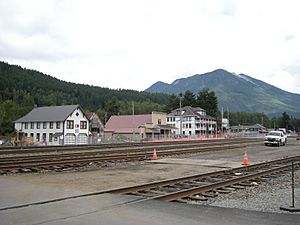 The heart of Skykomish (2008). In foreground, the BNSF tracks. Behind that, left to right: Skykomish Historical Society Museum, Maloney's General Store, listed on the National Register of Historic Places, Skykomish Hotel, Cascadian Hotel and Café.

There were 95 households, of which 20.0% had children under the age of 18 living with them, 34.7% were married couples living together, 4.2% had a female householder with no husband present, 8.4% had a male householder with no wife present, and 52.6% were non-families. 44.2% of all households were made up of individuals, and 14.7% had someone living alone who was 65 years of age or older. The average household size was 2.08 and the average family size was 2.87.

All content from Kiddle encyclopedia articles (including the article images and facts) can be freely used under Attribution-ShareAlike license, unless stated otherwise. Cite this article:
Skykomish, Washington Facts for Kids. Kiddle Encyclopedia.