Wenatchee ( wen-ATCH-ee) is a city located in north-central Washington and is the largest city and county seat of Chelan County, Washington, United States. The population within the city limits in 2010 was 31,925. In 2014, the Office of Financial Management estimated the population at 33,070. Located at the confluence of the Columbia and Wenatchee rivers near the eastern foothills of the Cascade Range, Wenatchee lies on the western side of the Columbia River, across from the city of East Wenatchee. The Columbia River forms the boundary between Chelan and Douglas County. Wenatchee is the principal city of the "Wenatchee–East Wenatchee, Washington Metropolitan Statistical Area", which encompasses all of Chelan and Douglas counties (total population around 110,884). However, the 'Wenatchee Valley Area' generally refers to the land between Rocky Reach and Rock Island Dam on both banks of the Columbia, which includes East Wenatchee, Rock Island, and Malaga.

The city was named for the nearby Wenatchi Indian tribe. The name is a Sahaptin word that means "river which comes [or whose source is] from canyons" or "robe of the rainbow". Awenatchela means "people at the source [of a river]". The city of Wenatchee shares its name with the Wenatchee River, Lake Wenatchee and the Wenatchee National Forest.

Wenatchee is known as the "Apple Capital of the World" due to the valley's many orchards. The city is also sometimes referred to as the "Buckle of the Power Belt of the Great Northwest". The "Power Belt of the Great Northwest" is a metaphor for the series of hydroelectric dams on the Columbia River. Rock Island Dam is located nearest to the middle of this "belt", and so was labeled the "Buckle". This saying is printed at the top of every issue of Wenatchee's newspaper, the Wenatchee World, and is no longer in common use elsewhere.

Archeological digs in nearby East Wenatchee have uncovered Clovis stone and bone tools dating back more than 11,000 years, indicating that people migrating during the last Ice Age spent time in the Wenatchee area. The Columbia River and nearby mountains and sagebrush steppes provided an ample supply of food. Clovis points are on display at the Wenatchee Valley Museum & Cultural Center and research findings are available through the Wenatchee World.

As early as 1811, fur traders from the Northwest Fur Company entered the Wenatchee valley to trap and trade with the Indians. In 1863, Father Respari, a Catholic priest, began his missionary work with the Indians. He was followed some 20 years later by Father De Grassi, who built a log cabin on the Wenatchee River near the present town of Cashmere. Throughout the 19th century, other white settlers came to homestead the land. Wenatchee was platted in September 1888 and officially incorporated as a city on January 7, 1893. The 1900 U.S. Census counted 451 residents. 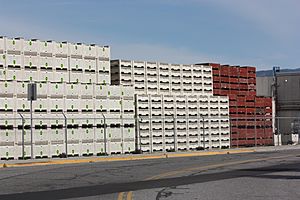 Apple field bins are stacked high at a processing facility in Wenatchee.

The Great Northern Railway completed its railroad line between St. Paul, Minnesota, and Seattle in 1893. Its route through the Wenatchee Valley was significant to the development of this region. The railroad not only provided passenger travel to and from Wenatchee, but it provided for freight service for shipments of wheat, apples, and other products to out-of-state markets.

By the early 20th century, the Wenatchee Commercial Club, now the Wenatchee Valley Chamber of Commerce, was advertising the region as the "Home of the World's Best Apples." The tree fruit industry provided the economic backbone for the region for a century and still is an important source of revenue.

On 22 May 1910, the Wenatchee free speech fight occurred when members of the Industrial Workers of the World (IWW) were arrested for speaking in the street in front of the local hall of the Socialist Party of America. The town had freed imprisoned IWW members by June; however, tensions resumed in September 1911 when police raided a house rented by six IWW men as well as arresting twenty-five migrant workers found carrying IWW literature. Again, the men were all quickly released.

The Wenatchee Valley also boasts one of only two aluminum smelters remaining in the Northwestern United States at the ALCOA plant in Malaga. The plant announced in November 2015 that it would be shutting down operations on January 5, 2016. Other growing areas of the regional economy are tourism and information technology. 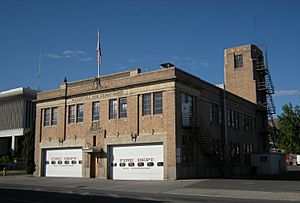 Wenatchee Fire Station No. 1 is listed on the National Register of Historic Places (NRHP).

On October 5, 1931, Clyde Pangborn and his copilot Hugh Herndon landed their airplane, named the Miss Veedol, in the hills of East Wenatchee, and thus became the first aviators to fly nonstop across the Pacific Ocean. The 41-hour flight from Sabishiro Beach, Misawa, Aomori Prefecture, Japan, won them the Harmon Trophy for the greatest achievement in flight of 1931.

In 1936, with the completion of Rock Island Dam, Wenatchee was protected from the summer flooding of the Columbia River, and the first of 14 hydroelectric projects on the Columbia began generating electric power. The reservoirs thus generated also made it possible to irrigate hundreds of thousands of acres of farmland in the Columbia Basin.

In 1975, Stemilt Growers moved its headquarters from nearby Stemilt Hill to Olds Station, Wenatchee. The company grows, packs and ships tree fruit and would go on to become the largest fresh market sweet cherry shipper in the world.

The Wenatchee child abuse prosecutions occurred in 1994 and 1995.

Every year from the last week of April to the end of the first week of May, Wenatchee hosts the Washington State Apple Blossom Festival, which probably brings in the largest number of people Wenatchee sees annually, with the exception of all the migrant workers coming in to pick the crop. It features two relatively large parades: the Apple Blossom Youth Parade on the last Saturday in April and the Apple Blossom Grand Parade on the first Saturday in May, a food fair representing cuisine from around the world, and a traveling carnival.

According to CNN's Money Magazine, Wenatchee had the second fastest forecast real estate value growth in the country for June 2006–June 2007. 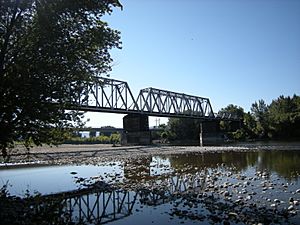 The Wenatchee River, just before it flows into the Columbia.

The city of Wenatchee is bordered by the Wenatchee River on the north, the Columbia River to the east, and the Wenatchee Mountains to the south and west. These ridges and peaks form a wall around the western and southern sides of the city. According to the United States Census Bureau, the city has a total area of 8.04 square miles (20.82 km2), of which 7.77 square miles (20.12 km2) is land and 0.27 square miles (0.70 km2) is water.

There were 12,379 households of which 33.4% had children under the age of 18 living with them, 44.6% were married couples living together, 11.9% had a female householder with no husband present, 5.8% had a male householder with no wife present, and 37.6% were non-families. 31.2% of all households were made up of individuals and 14.2% had someone living alone who was 65 years of age or older. The average household size was 2.53 and the average family size was 3.19.

The Wenatchee post office contains an oil on canvas mural, The Saga of Wenachee, painted in 1940 by Peggy Strong. Murals were produced from 1934 to 1943 in the United States through the Section of Painting and Sculpture, later called the Section of Fine Arts, of the Treasury Department. The WPA was the largest and most ambitious American New Deal agency, employing individuals to carry out public works projects.

Wenatchee is home to many performing arts groups including the Performing Arts Center of Wenatchee, the Wenatchee Valley Symphony, Wenatchee Big Band, Columbia Chorale, Wenatchee Valley Appleaires and The Apollo Club. Artists gather and share their work in shows and among one another. Music Theater of Wenatchee and Mission Creek Players present theatrical productions and musicals. Wenatchee also is home to the Mariachi Huenachi Band and a mariachi program in the Wenatchee School District. The Wenatchee High School Golden Apple Band is well known and has won sweepstakes at the Washington State Auburn Marching Band Championship in the 2012 marching season. 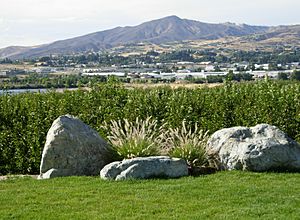 The Wenatchee Valley and the surrounding areas provide an abundance of sports and recreational activities for any season. There are several facilities including the tennis club, an Olympic size swimming pool, an ice arena, several 18-hole and 9-hole golf courses, a 9-hole disc golf course, and countless baseball diamonds and soccer fields as well as two skateboard parks. There are lots of places to hike, fish and hunt, both birds and larger game. Boating and water recreation are also quite common. Many kayak, windsurf and water-ski on the Columbia. Whitewater rafting and inner-tubing is frequent on the Wenatchee River. In the winter, the mountains near Wenatchee provide great snowmobiling, sledding at Squilchuck State Park, as well as skiing and snowboarding at Mission Ridge (30 minutes drive) and Stevens Pass (1 hour and a half drive). Nordic skiing is available at the Stevens Pass Nordic Center, Leavenworth (25 minute drive), and the Methow Valley (1 hour and 45 minute drive).

The city also offers a large system of parks and paved trails known as the Apple Capital Recreational Loop Trail. The 10-mile (16 km) loop along both banks of the Columbia River is used by cyclists, walkers, joggers, and skaters. A project to extend the eastern segment of the trail 5 miles (8.0 km) north to Lincoln Rock State Park was completed on July 9, 2015. An additional 3.2-mile (5.1 km) extension on the east side runs south to Kirby Billingsley Hydro Park. A short extension slated for completion in Fall 2017 is planned from the west end of the Odabashian bridge to the corner of Easy Street and the highway. In the winter, cross-country skiers and snowshoers also use the trail. The trail connects in the south at the Old Wenatchee-East Wenatchee Bridge, better known as the walking bridge, and in the north at the Richard Odabashian Olds Station Bridge. It passes through Wenatchee Confluence State Park. Much of the hillside areas surrounding the city of Wenatchee have been purchased by or have their rights held by the Chelan-Douglas Land Trust which protects them as a natural resource and as a site for hiking in the foothills. The foothills trail system along the western edge Wenatchee provides numerous short trails of varying difficulty for walking, hiking and mountain biking.

The Wenatchee Youth Circus, ("The Biggest Little Circus in the World") founded by Paul K. Pugh in 1952, continues to provide circus fans with opportunities to watch a real, live circus (minus the wild animals) with performers ranging in age from 6-18. The circus travels and performs in the summer months, practices indoors in the winter, and sets up its rigging for outdoor practices during the fair weather of springtime.

Transit services within Wenatchee is provided by Link Transit, which serves all of Chelan County and parts of Douglas County. Link Transit also runs commuter bus service from Wenatchee to many outlying communities in the region, including Leavenworth and Chelan. The agency adopted its first electric buses with batteries in 2014, running on three trolley routes in Wenatchee branded as "The Current".

The city is served by Pangborn Memorial Airport which is located about 10-mile (16 km) to the east, and supports commercial flights from Wenatchee to and from Seattle on Alaska Airlines.

Wenatchee is in the major railroad line of the BNSF Railway (formerly Great Northern Railway) to Seattle. Wenatchee was once the eastern terminus of the Great Northern electric-driven train service (1928/1929 — 1956) on its New Cascade Tunnel route via the Chumstick Valley, which went all the way to Skykomish. There, steam locomotives or diesel locomotives replaced electric locomotives along this route, as well as having a maintenance base for the electric locomotives. Today, Amtrak's Empire Builder passenger train serves Wenatchee.

All content from Kiddle encyclopedia articles (including the article images and facts) can be freely used under Attribution-ShareAlike license, unless stated otherwise. Cite this article:
Wenatchee, Washington Facts for Kids. Kiddle Encyclopedia.