East Wenatchee is a city in Douglas County, Washington, United States, along the northern banks of the Columbia River. The population at the 2010 census was 13,190, a 129.1% increase on the 2000 census. As of April 1, 2015, the Office of Financial Management estimates that the current population is 13,659.

On November 10, 2002, East Wenatchee was designated a principal city of the Wenatchee−East Wenatchee Metropolitan Statistical Area by the Office of Management and Budget.

At the turn of the 20th Century irrigation projects, including the Columbia Basin Project east of the region, fostered the development of intensive agriculture in the shrub-steppe native to the region. Fruit orchards become one of the area's leading industries.

In 1908, the first highway bridge to span the Columbia River opened. The privately owned bridge carried people, horses, wagons, and automobiles; it also supported two large water pipelines along its sides. It connected Chelan County on the Wenatchee shore with Douglas County on East Wenatchee shore. The bridge opened East Wenatchee and the rest of Douglas County to apple orchard development. Still standing today, the bridge is a 1,060-foot (320 m) pin-connected steel cantilever bridge and cost $177,000 to build. It once carried Sunset Highway (State Highway 2) across the river.

The bridge was the brainchild of W. T. Clark, one of the builders of the Highline Canal, a major irrigation project to water the apple orchards in the valley. It was financed in part by James J. Hill (1838–1916), of the Great Northern Railway (which arrived in Wenatchee in 1892). In its second year of operation the canal firm that owned it decided to start charging tolls.

This prompted local leaders to hasten to the state legislature to persuade the state to purchase the bridge as part of the state highway system. The state purchased the bridge despite the state-employed consultant's opinion "that the ugliness of the structure is very apparent" (Dorpat), despite defects in the timber floor and concrete piers, and despite leaks in the waterpipes.

The structure remained in full use until 1950 when the George Sellar bridge was built. Today, it remains as a footbridge and still has the old pipeline running across it.

From its foundation in agriculture, the region's economy has diversified to include year-round tourism and a variety of other industries.

On October 5, 1931, East Wenatchee became part of aviation history. Having taken off from Misawa, Japan, pilots Clyde Pangborn and Hugh Herndon Jr. safely belly-landed their Bellanca airplane Miss Veedol on a nearby airstrip known then as Fancher Field. After take off, the pilots intentionally jettisoned the landing gear to conserve fuel. This flight was the first nonstop flight across the Pacific Ocean. In honor of this pioneering flight, East Wenatchee's airport is called Pangborn Memorial Airport, and the Pangborn-Herndon Memorial Site, listed National Register of Historic Places, is nearby.

On May 27, 1987, East Wenatchee became part of archaeological history. On that date, while digging in an orchard just east of the city, farmworkers accidentally discovered a cache of 11,000-year-old Clovis points and other artifacts, left by Pleistocene hunters some 11,000 years earlier. The East Wenatchee Clovis Site, explored in two subsequent archaeological digs in 1988 and 1990, was closed to science by the landowner after protests by local Native American tribes. On January 8, 2007, East Wenatchee had a devastating wind storm with 100MPH plus winds this storm caused thousands of dollars worth of damage to homes, businesses, and city parks many people went without power for days and even weeks. The legal moratorium on new archaeological work at the site ended on June 1, 2007.[1]

Wheat and other grain are also grown on farms in the outlying areas near East Wenatchee.

Nearby entertainment and recreation

The following activities are located in East Wenatchee or the nearby city of Wenatchee:

On the first weekend of October, the City hosts an annual Wings and Wheels Festival to commemorate Clyde Pangborn's historic non-stop flight across the Pacific Ocean.

The following projects are taking place in East Wenatchee or nearby Wenatchee.

There were 4,997 households of which 36.5% had children under the age of 18 living with them, 50.4% were married couples living together, 14.3% had a female householder with no husband present, 5.6% had a male householder with no wife present, and 29.6% were non-families. 22.9% of all households were made up of individuals and 9% had someone living alone who was 65 years of age or older. The average household size was 2.63 and the average family size was 3.08.

Link Transit provides public transportation throughout the Wenatchee valley including routes that connect the cities of Wenatchee and East Wenatchee with Leavenworth, Chelan, and Waterville. 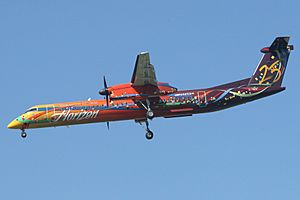 The city is served by Pangborn Memorial Airport with daily flights to Seattle via Alaska Airlines.

There are also Executive Flight jets that fly out of Pangborn Memorial Airport.

East Wenatchee's rail access is located across the Columbia River in Wenatchee which is on the major railroad line of the Great Northern Railway (now BNSF Railway) to Seattle. It was once the eastern terminus of electric operations (1909–56) on its Cascade Tunnel route, which went all the way to Skykomish. Here, steam or diesel locomotives were changed, or coupled, to electric locomotives for this route. Today Amtrak's Empire Builder serves the city.

All content from Kiddle encyclopedia articles (including the article images and facts) can be freely used under Attribution-ShareAlike license, unless stated otherwise. Cite this article:
East Wenatchee, Washington Facts for Kids. Kiddle Encyclopedia.