Rock Island Dam is a hydroelectric dam on the Columbia River, in the U.S. state of Washington. Chelan County Public Utility District's Rock Island Dam and Hydro Project was the first dam to span the Columbia, having been built from 1929 to 1933. It is located near the geographical center of Washington, about 12 miles (19 km) downstream from the city of Wenatchee. By river, the dam is 235 miles (378 km) south of the Canada–US border and 453 miles (729 km) above the mouth of the river at Astoria, Oregon. The dam's reservoir is called Rock Island Pool.

Rock Island Dam is constructed on Columbia River basalt similar to that which is exposed on the cliffs near the dam. These columnar basalts were formed from lava flows during the mid- to late-Miocene Epoch, some 14 to 16 million years ago. The rock is strong and durable and provides a very stable foundation for the structure.

Under the terms of the Rock Island Settlement Agreement, the District provides spill to improve the survival rate of juvenile salmon passing the Project. During the spring, 1,570,495 acre feet (1.937177×109 m3) of water was spilled during a 59-day period between April 20 and June 17. This resulted in 73,427 megawatt-hours of foregone generation valued at $13.4 million.

In 1927, the Rock Island site came to the attention of the Stone and Webster Engineering Corporation, a Boston-based holding company that managed Puget Sound Power & Light Company. The site was recognized for its potential to provide power for the growing electrical load in the state. On December 13, 1928 an application was filed with the Federal Power Commission for a preliminary permit to investigate the site. This was followed by an application for license submitted in June 1929 by the Washington Electric Company, a subsidiary construction corporation of Puget Sound Power & Light (now part of Puget Sound Energy). The license was authorized on October 16, 1929, and on January 14, 1930, at the beginning of the Great Depression, construction started on the first dam to span the Columbia River. 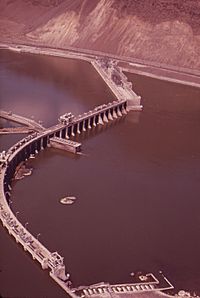 The development of Rock Island Dam occurred over a period of some 50 years. There were three main construction periods, each taking place about 20 years apart as the need for low-cost hydroelectric power was paramount in the region. Development began in January 1930, and the dam, powerhouse, and first four operating units were turned over to Puget Sound Power & Light Company by Stone and Webster Engineering Corporation on February 1, 1933. Work on completion of the dam, powerhouse expansion and installation of six additional units by Chelan County PUD began in July 1951 and was completed on April 30, 1953. Construction of the Second Powerhouse, with its eight turbine generators located on the west bank of the river, began on August 4, 1974. The Second Powerhouse was placed in commercial operation on August 31, 1979. 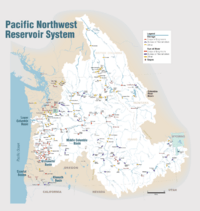 All content from Kiddle encyclopedia articles (including the article images and facts) can be freely used under Attribution-ShareAlike license, unless stated otherwise. Cite this article:
Rock Island Dam Facts for Kids. Kiddle Encyclopedia.