Sultan is a city in Snohomish County, Washington, United States. It is located approximately 23 miles (37 km) east of Everett at the confluence of the Skykomish River and the Sultan River, a minor tributary. The city had a population of 4,651 at the 2010 census.

The city was founded in 1880 at the site of a Skykomish village and initially settled during a small gold rush. Sultan was platted in 1889, just prior to the arrival of the Great Northern Railway, and was a hub for mining and the lumber industry. It was incorporated on June 28, 1905, with a population of 700. The city was home to a Civilian Conservation Corps camp during the Great Depression and undertook several civic improvements in the post-war years.

Sultan has since become a bedroom community for large employment centers in the Puget Sound region. The city has several public parks, a historic museum, and is located near outdoor recreation areas in the Cascade Mountains. It is connected to nearby cities by U.S. Route 2.

Sultan was originally settled around 1880, but not officially incorporated until June 28, 1905. Both the Sultan River and the town of Sultan were named by prospectors for the chief of a Snohomish sub-tribe who lived on the Skykomish River in the 1870s. His name as Tsul-tad or Tseul-tud, which was anglicized by the miners into Sultan. For generations Sultan remained a small logging community.

In 1968, the town was visited by more than 20,000 hippies during The Sky River Rock Festival and Lighter Than Air Fair, one of the first outdoor rock festivals. The event took place on a farm near town. The line-up included Santana, Grateful Dead, Country Joe McDonald, Muddy Waters, Buffy St. Marie, guitarist John Fahey, and many others. Also on hand was the young comedian Richard Pryor.

Sultan is one of the smallest cities in Snohomish County, with an estimated population of 5,388 in 2019. The city's population has significantly increased since the start of suburban development in the late 1960s, reaching over 3,300 by 2000. Sultan's population grew an additional 20 percent between 2000 and 2005. The city government has made various preparations for additional population growth, including new connections to the Spada Lake water supply to supplement its own system. By 2035, the city and its surrounding urban growth area is expected to have a population of 8,369.

Of the 1,607 households, 44.4% had children under the age of 18 living with them, 52.5% were married couples living together, 12.3% had a single female householder with no spouse present, 6.3% had a single male householder with no spouse present, and 28.9% were non-families. 21.0% of all households were made up of individuals, and 6.1% had someone living alone who was 65 years of age or older. The average household size was 2.89 and the average family size was 3.36.

As of 2015[update], Sultan had an estimated workforce population of 3,709 and an unemployment rate of 10.4 percent—far above the county average of 3.1 percent. The most common employers for Sultan residents are in the retail sector (20.9%), followed by educational and health services (15.3%), manufacturing (11.9%), and construction (7.0%). Only 8.8 percent of employed residents work within Sultan city limits, while the rest commute to other areas for work. The most common commuting destinations for Sultan residents include Monroe (11.0%), Seattle (9.7%), Everett (8.2%), Redmond (6.0%), and Bellevue (5.5%). The average one-way commute for the city's workers was approximately 38.8 minutes; 80 percent of commuters drove alone to their workplace, while 9.4 percent carpooled and 3.6 percent used public transit.

Sultan businesses and employers provide approximately 1,010 jobs, and are primarily in the services and manufacturing industries. The city's largest employer is the Sultan School District, which provides 254 jobs.

Public schools in the Sultan area are operated by the Sultan School District, which also covers nearby Gold Bar and other rural areas north and west of Index. The school district had an enrollment of approximately 1,992 students in 2016, with 104 total teachers. It has one high school, one middle school, and two elementary schools (of which one serves Sultan). The current high school was constructed in 1951 to replace an earlier building that was destroyed four years prior. A $56 million bond issue to upgrade the district's four schools and construct a new administrative building was rejected by voters in 2016. The Sky Valley Historical Society maintains a small local museum in the city's post office building in downtown Sultan. 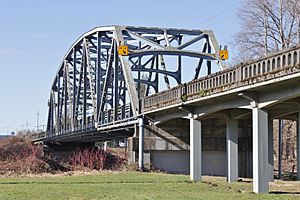 Sultan is connected to nearby communities by U.S. Route 2 (US 2), which runs east–west along the Skykomish and Snohomish rivers from Everett to Eastern Washington via Stevens Pass. The nearest cities on the highway are Monroe, 5 miles (8.0 km) to the west, and Gold Bar to the east. The highway carries daily average of approximately 18,000 vehicles through Sultan, with higher volumes during summer months and ski season. Due to its high rate of accidents, including more than 2,600 in the county in the early 2000s and 100 within Sultan city limits from 1999 to 2000, the highway is considered one of the most dangerous in the state. Sections of US 2 near Sultan were rebuilt to add safety features, including roundabouts, rumble strips, warning signage, and additional policing. The BNSF Railway's Scenic Subdivision also runs along U.S. Route 2, connecting Everett to Eastern Washington and also carrying Amtrak's Empire Builder train. The highway and railroad cross over the Sultan River on a pair of truss bridges, while a third is planned to be built for pedestrians and bicyclists.

Public transit service along US 2 is operated by Community Transit and consists of two routes that travel from Everett Station to Snohomish, Monroe, Sultan, and Gold Bar. The city also has a small park and ride lot that is served by Community Transit. A private airfield, Sky Harbor Airport, is located near Sultan and is open to small aircraft. It has a single, unpaved runway.

Electric power for Sultan residents and businesses is provided by the Snohomish County Public Utility District (PUD), a consumer-owned public utility that serves all of Snohomish County. The PUD operates the Culmback Dam north of Sultan, which generates electricity for the region and also provides 80 percent of Snohomish County's water supply. The Sultan city government provides water and water treatment to residents and businesses, via a separate city-owned reservoir located north of Sultan. Wastewater and stormwater is treated at a treatment plant that discharges into the Skykomish River. Solid waste collection is provided by the city government, while recycling and yard waste collection is contracted to Allied Waste.

All content from Kiddle encyclopedia articles (including the article images and facts) can be freely used under Attribution-ShareAlike license, unless stated otherwise. Cite this article:
Sultan, Washington Facts for Kids. Kiddle Encyclopedia.