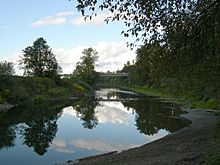 Bridge crossing the Snoqualmie River on the Woodinville-Duvall Road as it enters the center of Duvall (2007).

The area that became known as Duvall was historically the home of the Snoqualmie and other ancestral Tulalip Native American tribes. Following their relocation under the Treaty of Point Elliott, the area was homesteaded by veterans of the Civil War. The center of present-day town was located on a hillside homesteaded by Francis and James Duvall, loggers who arrived in 1871.

An early milestone in the settlement of Duvall proper was the relocation of the town of Cherry Valley. Around 1909, the Chicago, Milwaukee and St. Paul Railroad agreed to move Cherry Valley homes and businesses to Duvall in order to continue the construction of a railroad line along the Snoqualmie River. The newly relocated town, briefly named Cosgrove after Samuel G. Cosgrove, underwent a real estate boom; streets and sidewalks were laid and a train depot was constructed. This was followed by construction of a movie house, a drug store, a new schoolhouse, and several hotels. By 1911, the Duvall Citizen began publishing regular editions of news events.

On April 28, 1968, nearly 3,000 fans attended a rock concert at a farm in Duvall where an upright piano was dropped from a helicopter. Performances included Country Joe and the Fish. This concert is well-known to locals as the Piano Drop. This event inspired the Sky River Rock Festival which occurred later that year.

The town of Duvall has experienced a great amount of construction during the period of 2008-2009 with the aim of making the one-road town center more accessible and presentable to tourists.

Community Easter Egg Hunt held every year in McCormick Park, open to everyone.

'Duvall Days' is held in June in downtown Duvall. The event is typically marked by a parade, street side vendors, live entertainment, and many games and activities for children.

The 'Duvall Run' is also held every June and includes the Half Marathon, 10-kilometer and 5-kilometer races.

The day after 'Duvall Days' is the day of the annual pancake breakfast, which is hosted by the town fire department.

Outdoor music in July at Summer Stage and Movies In The Park in August, all located in McCormick Park.

The climate in this area has mild differences between highs and lows, and there is adequate rainfall year round. Because of its location relative to the Northern Cascades, the surrounding Snoqualmie Valley is subject to flooding from late fall to early spring. According to the Köppen Climate Classification system, Duvall has a marine west coast climate, abbreviated "Cfb" on climate maps.

There were 2,224 households, of which 52.3% had children under the age of 18 living with them, 70.2% were married couples living together, 8.0% had a female householder with no husband present, 3.4% had a male householder with no wife present, and 18.3% were non-families. 14.4% of all households were made up of individuals, and 2.8% had someone living alone who was 65 years of age or older. The average household size was 2.99 and the average family size was 3.33.

All content from Kiddle encyclopedia articles (including the article images and facts) can be freely used under Attribution-ShareAlike license, unless stated otherwise. Cite this article:
Duvall, Washington Facts for Kids. Kiddle Encyclopedia.