Bothell BOTH-əl is a city located in King and Snohomish Counties in the State of Washington. It is part of the Seattle metropolitan area. Bellevue, Bothell, Kenmore, Kirkland, Redmond, and Woodinville are suburban cities that are considered part of the "Eastside", as they are situated on the east side of Lake Washington. Based on per capita income, Bothell ranks 78th of 614 areas in the state of Washington to be ranked. 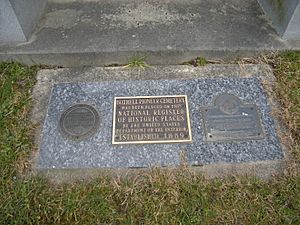 Historical plaque at Bothell Pioneer Cemetery. The cemetery founded in 1889, is listed on the National Register of Historic Places.

Prior to European settlement, the Sammamish River Valley from Lake Washington to Issaquah Creek south and upstream of Lake Sammamish was inhabited by a population of as many as 200 Native Americans known as the Sammamish. The Sammamish were relocated after the Puget Sound War in 1856 to reservations and non-reservation lands.

In 1870, Columbus S. Greenleaf and George R. Wilson filed land claims in the area formerly inhabited by the Sammamish near present-day Bothell, and built homes. Eight families followed over the next six years. In 1876, Canadian George Brackett bought land and began commercial logging out of a camp located on the north bank of the Sammamish River in what is now the heart of downtown Bothell. A store, school, and sawmill followed over the next several years.

In 1885, Brackett sold 80 acres (32 ha) to David Bothell, a settler from Pennsylvania. The town's first postmaster, who bought his property from Bothell, named the town in his honor in 1888. Later that same year, a local railroad was built through the town to transport coal from Issaquah. Bothell was officially incorporated on April 14, 1909.

Bothell continued to grow as logging expanded and boat traffic brought increasing amounts of goods and passengers up and down the river. As more people moved into the area, the Army Corps of Engineers decided to dredge and straighten the river in the years shortly after Bothell's incorporation. Most boat traffic came to an abrupt end only a few years later when Lake Washington was lowered in 1917. Water transport also shifted to trucks after a brick road was built from Seattle. The logging economy declined quickly around the same time, and the local economy shifted to farming.

After World War II, better highways and a post-war boom brought suburban development to Bothell. These new neighborhoods and a series of annexations dramatically expanded Bothell's population from about 1000 in 1950 to over 30,000 as of 2006. Bothell was mostly a bedroom community for people working in Seattle until the 1990s when business development brought new jobs to create a regional employment center with about 20,000 jobs, many in high technology sectors such as biotechnology and software development. In 1990, a campus of the University of Washington opened in Bothell.

In 2010, the city of Bothell began a $150 million program to redevelop downtown, including the demolition of 15 buildings, moving State Route 522, expanding the Bothell–Everett Highway, expanding a city park, and expanding the city hall.

A major fire in downtown broke out at the Mercantile Building on July 22, 2016, and damaged and closed more than 20 businesses. The fire dealt a blow to the redevelopment program and required state aid for rebuilding.

Bothell is a geographical oddity in that it straddles two counties (King County and Snohomish County). Because most streets in Bothell are numbered and not named, streets that cross the county line often change numbers. For example, 104th Avenue NE in King County becomes 23rd Avenue SE when it crosses into Snohomish County. 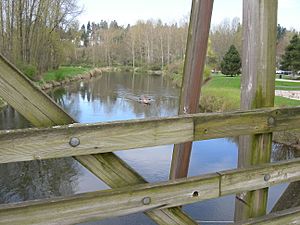 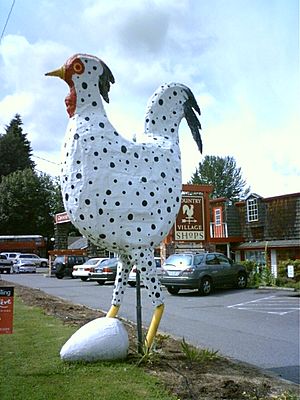 Bothell has several communities, districts, and neighborhoods. These include:

Bothell has a temperate oceanic climate, with cool summers and cool (but not cold) winters. Winter sees much more rainfall than summer and winters in Bothell (much like the rest of the PNW) are very cloudy and overcast. Summers are drier and cool to warm. 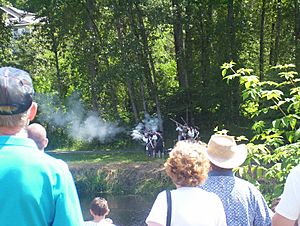 Major annual events throughout the year in Bothell include:

Bothell's Pop Keeney Stadium hosts games for several local high schools, including Inglemoor, Woodinville, and Bothell High Schools, even though the stadium was originally Bothell High School's and serves as its most important tenant. Football games at Pop Keeney have become major cultural and, to an extent, spiritual, gatherings for the community.

In November 2006, Bothell High School's football team tied the national record for most overtime periods (9) in a quarter-final game against Pasco, which they won 43-40. The previous record was set in Michigan in 1977, between Southeastern (Detroit) and Northeastern, with Southeastern winning, 42-36. The team also had its first appearance in the state finals later that same season, which resulted in defeat to Oak Harbor High School.

In 2007 the Bothell High School baseball team made it to state playing at Safeco Field. They recorded a 4th-place finish.

In 2009 the Bothell Alumni club raised money to get a state of the art scoreboard for Pop Keeney Stadium. In 2009 it was installed, only the 2nd in the state of Washington of its type.

Bothell High School's football team has made it to the 4A State Championship at the Tacoma Dome three times, winning it all in 2014.

In August 2009, the Ruiz-Costie/Northshore Pool was mothballed pending a new operator. A new aquatic center may replace it, as part of Bothell's core redevelopment.

In May 2011, Bothell High School's Varsity baseball team won the 4A State Championships.

In December 1962, LIFE Magazine recognized Bothell's 112-foot (34 m) Christmas tree as the largest living Christmas tree in the world. However, in the late 1970s, disease attacked the tree, and the top had to be removed.

In 2007, about 5,000 to 7,000 people gathered for a parade and outdoor concert at the Veterans Memorial Amphitheater at Bothell Landing in honor of local American Idol contestant Blake Lewis.

There were 13,497 households of which 32.0% had children under the age of 18 living with them, 51.9% were married couples living together, 9.1% had a female householder with no husband present, 4.1% had a male householder with no wife present, and 35.0% were non-families. 27.2% of all households were made up of individuals and 8.9% had someone living alone who was 65 years of age or older. The average household size was 2.46 and the average family size was 3.00.

All content from Kiddle encyclopedia articles (including the article images and facts) can be freely used under Attribution-ShareAlike license, unless stated otherwise. Cite this article:
Bothell, Washington Facts for Kids. Kiddle Encyclopedia.