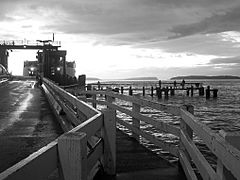 Mukilteo ( MUK-əl-TEE-oh), which means "good camping ground," is a waterfront city in Snohomish County, Washington, United States. The population was 20,254 at the 2010 census. It is on the shore of the Puget Sound, and is the site of a Washington State Ferries terminal linking it to Clinton, on Whidbey Island.

Though the word Mukilteo is widely believed to mean "good camping site," the HistoryLink.org site notes that in the Snohomish dialect Muk-wil-teo means "narrow passage," a reference to the sand spit that formed the original Mukilteo landing. Mukilteo was officially incorporated on May 8, 1947, but the city has a historic role in the development of the Puget Sound. It was at Mukilteo that the Point Elliott Treaty was signed between Governor Isaac Stevens and the chiefs of 22 Puget Sound tribes on January 22, 1855.

The treaty ceded land to the United States from Point Pully (now called Three Tree Point south of Seattle) to the British (Canada) border in exchange for a variety of benefits, including land, education, health care and hunting and fishing rights. The treaty was signed before more than 2,500 Native Americans.

According to the Mukilteo Historical Society, the town became the first settled by Europeans in 1858 and was the temporary county seat of Snohomish County for several months in 1861 after Snohomish County was created from Island County. The city of Snohomish was designated as county seat in July 1861. Initially the settlement was called Point Elliott, the name given the location by the Wilkes Expedition in 1841.

In its early years, Mukilteo was a fishing village, trading post, and a port-of-entry. Surrounding wooded hills filled with Douglas fir, cedar and hemlock supported a lumber mill and the town also had a cannery, a brewery, and a gunpowder plant. Traces of the powder mill remain in the name of Powder Mill Gulch, a ravine that is located about one mile (1.6 km) into the city limits of Everett. Japanese Gulch provides rail access from the Mukilteo waterfront to the Boeing's Boeing Everett Factory at Paine Field.

In 1900, the population was only 350. The next year, the federal Lighthouse Board decided to put a light and fog signal at the point in Mukilteo. The lighthouse, which still stands today, was completed in 1906.

Even at incorporation in 1947, almost a century after the Point Elliott Treaty, Mukilteo's population stood at only 775. But by 1947, there was ferry service to Whidbey Island, a fuel storage facility for the Air Force on the waterfront, and a major rail line for the Great Northern Railway along the city's entire waterfront.

The first growth spurt for the city came with the 1980 annexation of an additional 1.2 square miles (3.1 km2) to the south along the Mukilteo Speedway or SR 525, which increased the population to 4,130 people. In 1991, the Harbour Pointe area was annexed, doubling the size of the city to 6.25 square miles (16.19 km2). The annexation increased the city's population to just over 10,000 and also presaged a shift from the Old Town commercial center near the ferry to new shopping and banking facilities at Harbour Pointe. With development since the Harbour Pointe annexation, the city's population has reached 19,360 (2005). The city has agreed to an urban growth area that includes approximately 15,000 additional potential residents.

The major parkland in the city is the former state park and lighthouse, next to the ferry docks. In 1954, the state acquired 17 acres (69,000 m2) of land around the lighthouse and made it into a state park, including a popular boat ramp. In 2003, the state faced a budgetary crisis and offered to cede the park to the city, which the city accepted. The city renamed the park Mukilteo Lighthouse Park and has plans for redevelopment that may ultimately spend $6 million for new facilities.

Substantial development is expected along the waterfront in the next five to ten years, with the state planning to build a new ferry terminal east of the current location. The Mukilteo-Clinton ferry provides service for 3 million passengers per year with two ferries currently serving the run.

In 1992, the government of Mukilteo opposed plans to expand Paine Field; Mayor Brian Sullivan said that the city disagrees "with the idea of a Sea-Tac north" and supports upholding a 1978 agreement between residents around Paine Field and Snohomish County.

The transportation hub will use some of the land being turned over by the federal government on the site of the old fuel docks. Included is an $18 million terminal for Sounder commuter rail service, scheduled to open in June, 2008 on the Everett-Seattle line. In addition, the city and Port of Everett are working to redevelop the remaining land on the tank farm property for private and public use.

Harbour Pointe is a mixed-use neighborhood at the south end of Mukilteo on land originally owned by Port Gamble Lumber Co. Harbour Pointe is the location of Kamiak High School and Harbour Pointe Middle School. After cutting timber from the area, Port Gamble sold it to Standard Oil of California (now Chevron) in the 1930s with the petroleum company planning to put a refinery on the property.

When the Alaskan oil fields were developed in the 1960s, Standard Oil decided that there was adequate capacity for refining at Anacortes and set aside plans to build a refinery on the property. In a locally published book, "Picnic Point Pathways," author Sandy Sandborg says that the decision was probably influenced by the environmental battle that Richfield Oil Company had with its planned refinery development at Kayak Point, north of Everett, during the 1960s.

A parcel of 460 acres (1.9 km2) that would become Picnic Point Park, just south of the city's border, was leased to Snohomish County in 1970. Then, in 1977, Standard Oil donated it to the county. Another 2,350 acres (10 km2) were purchased by Harbour Pointe Limited Partnership in the 1980s from Standard Oil. It would become the mixed-used development anchored by Harbour Pointe Golf Club, opened in September, 1989.

The city is traversed by the Southern Whidbey Island fault zone, discovered in 1996.

There were 8,057 households of which 34.1% had children under the age of 18 living with them, 57.9% were married couples living together, 8.9% had a female householder with no husband present, 3.5% had a male householder with no wife present, and 29.8% were non-families. 23.9% of all households were made up of individuals and 5.7% had someone living alone who was 65 years of age or older. The average household size was 2.51 and the average family size was 3.00.

There were 6,759 households out of which 40.1% had children under the age of 18 living with them, 61.8% were married couples living together, 8.6% had a female householder with no husband present, and 26.3% were non-families. 19.8% of all households were made up of individuals and 3.0% had someone living alone who was 65 years of age or older. The average household size was 2.66 and the average family size was 3.10.

Next to the Sea 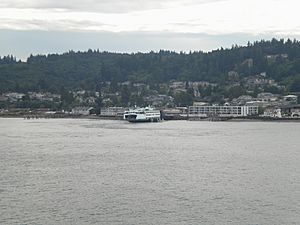 Mukilteo is located adjacent to Puget Sound, a large inlet of the Pacific Ocean separating Washington State's Olympic Peninsula from the main portion of the state of Washington. Most of the community is on a hillside that faces north or west towards Whidbey Island. "Mukilteo By the Bay" and "Mukilteo By the Sea" are variations of a slogan frequently seen on license plate frames in and around Mukilteo.

Though boating and fishing are popular in the area, there is only one boat launch with two seasonal docks and no marina in the city. At one point there were two boathouses on the waterfront, Mukilteo Boat House and McConnell's Boathouse, but both have been demolished and replaced with a condominium apartment building and a hotel respectively. The Lighthouse Park area and pilings near the ferry dock and hotel are popular places for local divers, due to the diversity of sea life and presence of squid. There are two public fishing piers, one on each side of the Ivar's restaurant.

Train service is provided by Sound Transit through its Sounder commuter rail route to Seattle, stopping at Mukilteo Station east of the ferry terminal. Community Transit operates local bus service on the Mukilteo Speedway toward a park and ride in Lynnwood, as well as commuter routes to Downtown Seattle and the University of Washington.

All content from Kiddle encyclopedia articles (including the article images and facts) can be freely used under Attribution-ShareAlike license, unless stated otherwise. Cite this article:
Mukilteo, Washington Facts for Kids. Kiddle Encyclopedia.