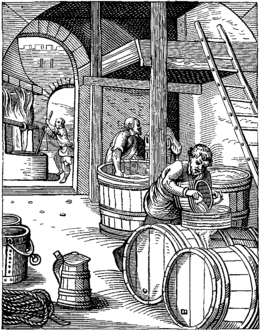 A brewery is a building, where beer is made or a business (brewing company) whose trade is the production and sale of beer.

Breweries can take up several city blocks, or be a collection of equipment in a homebrewer's kitchen. The diversity of size in breweries is matched by the diversity of processes, degrees of automation, and kinds of beer produced in breweries. Typically a brewery is divided into distinct sections, with each section reserved for one part of the brewing process.

The oldest brewery in the world still in operation is believed to be the Bavarian State-owned brewery Weihenstephan, found in the German city of Freising, which can trace its history back to 1040. Although the Zatec brewery in the Czech Republic claims it can prove paying beer tax in 1004.

All content from Kiddle encyclopedia articles (including the article images and facts) can be freely used under Attribution-ShareAlike license, unless stated otherwise. Cite this article:
Brewery Facts for Kids. Kiddle Encyclopedia.