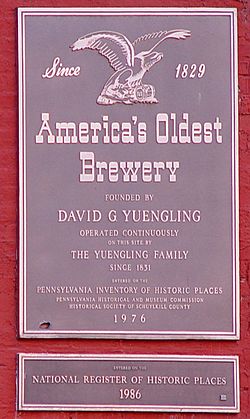 A plaque on the Yuengling Brewery, Pottsville, Pennsylvania, commemorating its status as "America's Oldest Brewery".

D. G. Yuengling & Son is the oldest operating brewing company in the United States. It was started in 1829. It is one of the largest breweries by volume in the country. Based on sales in 2011, Yuengling was tied with the Boston Beer Company, maker of Samuel Adams brands, as the largest producer of beer in the United States. Yuengling's headquarters are in Pottsville, Pennsylvania. Yuengling produces about 2.5 million barrels of beer a year. They operate two breweries in Pennsylvania and one in Tampa, Florida.

Yuengling is pronounced YING-ling, and is an Anglicized version of Jüngling, its founder's surname and the German term for "young man".

All content from Kiddle encyclopedia articles (including the article images and facts) can be freely used under Attribution-ShareAlike license, unless stated otherwise. Cite this article:
Yuengling Facts for Kids. Kiddle Encyclopedia.