Kids Encyclopedia Facts
Not to be confused with Montlake in Seattle, Washington.

Mountlake Terrace is a suburban city in Snohomish County, Washington, United States. It lies on the southern border of the county, adjacent to Shoreline and Lynnwood, and is 13 miles (21 km) north of Seattle. The city had a population of 19,909 people counted in the 2010 census.

Mountlake Terrace was founded in 1949 by real estate developers on the site of a disused airfield, intending to provide low-cost housing for veterans. Within five years, the community had grown to over 5,000 people and was incorporated as a city in 1954 to provide municipal services. An industrial park was developed at the northwest corner of the city, which was connected by Interstate 5 after it opened in 1965. Mountlake Terrace originally had several small shopping centers that declined due to the local economy and a pair of arsons in 1990.

The city government began developing a downtown revitalization plan with mixed-use buildings in the 2000s, with hopes of growing beyond a bedroom community for Seattle commuters. The Mountlake Terrace Transit Center, a major bus hub, opened in 2009 and is planned to have Link light rail service in 2024. The city has several parks, including access to Lake Ballinger, and hosts an annual summer festival that is part of Seafair.

The site of Mountlake Terrace was thickly forested in the mid-Nineteenth Century and formed part of the traditional hunting-gathering areas of the Snohomish people. The area was obtained by the Puget Mill Company in 1862. By 1900, most of the land in south Snohomish County had been logged. Pope & Talbot Company, the successor entity of the Puget Mill Company, subdivided the cut area into 10-acre plots, which were sold as "chicken ranches." These plots were sold with moderate success to ranchers raising poultry, mink, and chinchilla. An interurban rail line between Tacoma, Washington and Everett, Washington was built in 1910, allowing easier access to the farms from throughout the region. Many of them failed during the Great Depression, however, and the railroad was abandoned in 1939.

A portion of the area was used by the United States government during World War II as a landing field. At the end of the war, the government ceased operation of the airfield. In 1949, developers Albert LaPierre and Jack Peterson. bought the abandoned airstrip and began constructing cinder-block houses. They named their development "Mountlake Terrace" because from some parts of the property they could see both Mount Rainier and Lake Washington, and the old runway looked a little like a terrace.

In 1954, over 5,000 people lived in the area between 244th and 216th Streets SW, and 48th and 68th Avenues W. The existing infrastructure was overwhelmed by this unplanned growth. Some people waited a year for a party-line telephone, streets were unpaved, and household sanitation was provided by individual septic systems. The nearest police department was in Everett, 15 miles away. One resident, Patrick McMahan, became frustrated by these conditions, and organized the Mountlake Terrace Study Committee, which led a campaign to incorporate the community. The election held November 23, 1954 supported incorporation, 517 to 483. Voters chose a five-person city council in the same election. The council had its first meeting on November 24 and selected Gilbert "Gil" Geiser, a 35-year-old hardware store owner, as Mountlake Terrace's first mayor. Geiser had to lend the new city $5 so the incorporation papers could be filed. With the filing, on November 29, Mountlake Terrace officially became a third-class city.

Mountlake Terrace's population doubled between 1950 and 1960 and then nearly doubled again by 1970. Small businesses flourished in two strip-mall-type shopping centers in the middle of the area, on land provided by the developers. The developers also donated land for several churches, including the parish of St. Pius X, which celebrated its first mass on June 22, 1955. The John Fluke Corporation moved its electronics center from Seattle to Mountlake Terrace in 1959. In 1961 a bond issue was approved in a special election; it was used to build a City Hall.

The city had been first envisioned as an automobile-based bedroom community, but subsequent leaders began to envision it as a "stand-alone" development with an economically vital downtown area. This effort was aided by the arrival of Fluke and the construction of the two strip malls and the City Hall. However, this development halted in the 1980s. Boeing suffered a significant business downturn, in which about 75% of plant workers in Everett lost their jobs; Alderwood Mall was opened in Lynnwood which drew much of the area's business away from downtown; and in 1990 two arson fires in the city center caused significant destruction. In 1981, Fluke moved its facility to Everett. The 1980 census showed that Mountlake Terrace's population had dropped by almost 5 percent in 10 years. The city budget was repeatedly trimmed, but Mountlake Terrace entered 1989 with a $1.3 million deficit. 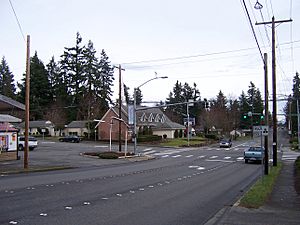 The mid-2000s saw new construction on 56th Avenue, and in 2006 the city created a plan to revitalize the downtown area and encourage economic activity. As of 2013 the town's largest employer was Premera Blue Cross, which employs some 3,000 people.

A city-center plan adopted in February 2007 allows mixed-use buildings of up to seven stories in the central block and up to five stories in surrounding blocks. The previous limit was three stories.

Mountlake Terrace is the seventh largest city in Snohomish County by population, with an estimated 21,338 residents in 2019. The city grew to a population of over 16,000 within 15 years of incorporating, but has remained mostly stable since then, with a jump in the 1980s and a small decline in the 2000s that resulted in school closures. Mountlake Terrace was originally developed with single-family homes, but newer units include multi-family buildings. Mountlake Terrace ranks third among cities in Washington state in terms of gross population density, with 6,506.1 inhabitants per square mile (2,512.0/km2).

There were 8,192 households, of which 30.8% had children under the age of 18 living with them, 41.2% were married couples living together, 12.8% had a female householder with no husband present, 5.7% had a male householder with no wife present, and 40.3% were non-families. 30.3% of all households were made up of individuals, and 7.7% had someone living alone who was 65 years of age or older. The average household size was 2.42 and the average family size was 3.04.

As of 2018[update], Mountlake Terrace has an estimated workforce population of 12,251 people, of which 11,753 are employed. The largest sectors of employment are educational and health services, at 26 percent, followed by professional services (12.9%) and retail (12.3%). The majority of workers in the city commute to other areas for employment, including 37.0 percent to Seattle, 6.9 percent to Lynnwood, 6.0 percent to Everett, and 5.8 percent to Bellevue. Only 3.2 percent of Mountlake Terrace residents work within the city limits. Over 67 percent of workers commute in single-occupant vehicles, while 13 percent take public transportation and 12 percent use carpools.

The city had 1,404 registered businesses with 6,993 total jobs, according to 2012 estimates by the U.S. Census and Puget Sound Regional Council, with most belonging to the professional services sector. Mountlake Terrace's employers attract commuters from around the region, with about 11 percent of workers living in Seattle and 7 percent from Everett. The largest employer in the city Terrace is health insurance firm Premera Blue Cross, which has over 2,400 employees at its Mountlake Terrace headquarters. Another major employer is Umpqua Bank, which absorbed Sterling Bank and its Mountlake Terrace-based subsidiary Golf Savings Bank.

Mountlake Terrace's businesses had $223 million in total taxable retail sales in 2016, growing by 46 percent over a five-year period. The city has several shopping centers that are concentrated in neighborhood centers and the Town Center area, which is proposed to become a mixed-use district. The Town Center is home to several major retailers and restaurants, including the Diamond Knot Brewpub and Double DD Meats, among the oldest surviving businesses in the city. Several office parks and industrial buildings are located on the 220th Street Southwest corridor northwest of the Town Center, including the Premera headquarters and other healthcare employers.

The city's public schools are part of the Edmonds School District, which serves most of South Snohomish County, including the neighboring cities of Edmonds, Lynnwood, and Woodway. The district has 41 total schools and an enrollment of over 21,000 students in 2018–19. Mountlake Terrace has five schools that are operated by the district: one high school, one middle school, and three elementary schools. Mountlake Terrace High School was opened in 1960 and rebuilt in 1991 at the same campus, located in the northeast corner of the city. The former high school building had an unusual circular gymnasium, named the "Hawk Dome", which had floor-to-ceiling windows.

The nearest post-secondary education institutions are Edmonds College, a community college in Lynnwood, and the University of Washington at Bothell. Mountlake Terrace is also home to three private schools: the Brighton Evergreen School, the Cedar Park Christian School, and the St Pius X Catholic School. 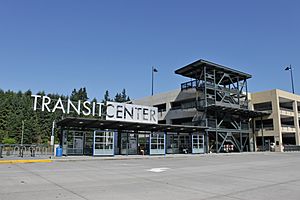 The city's public transportation is primarily provided by Community Transit, which also serves most of the county, and Sound Transit, a regional agency. Community Transit operates local routes that connect Mountlake Terrace's neighborhoods to Edmonds, Lynnwood, and Brier, as well as commuter express routes to Downtown Seattle and the University District. The express routes are supplemented by Sound Transit Express buses that stop at Mountlake Terrace Transit Center, a major hub with 890 parking stalls that was expanded in the late 2000s. The transit center is also served by a King County Metro route that connects Mountlake Terrace to Shoreline and Northgate Mall in Seattle. Sound Transit's Lynnwood Link Extension project began construction in 2019 and will bring Link light rail service to Mountlake Terrace Transit Center when it opens in 2024.

Mountlake Terrace is part of the Alderwood Water and Wastewater District, which provides tap water and sewage treatment services to most of southern Snohomish County. The water district sources its drinking water from the Spada Lake reservoir in the Cascade Mountains, which is treated and fluoridated by the City of Everett at the Chaplain Reservoir. The city government maintains a 2.5-million-US-gallon (9,500 kl) water tank at Jack Block Park that has reserve capacity for fires and boosting water pressure. Sewage from Mountlake Terrace is primarily sent to the City of Edmonds for treatment and discharge into Puget Sound, with overflow treated at the regional Brightwater facility near Maltby by King County Metro.

The city's nearest general hospital is the Edmonds branch of the Swedish Medical Center, located on State Route 99. Mountlake Terrace is part of the public hospital district, which operated the independent Stevens Hospital until it was acquired by Swedish in 2010. While the city has no general medical clinics, The Everett Clinic and public health provider Community Health Centers have identified Mountlake Terrace as a potential future market.

All content from Kiddle encyclopedia articles (including the article images and facts) can be freely used under Attribution-ShareAlike license, unless stated otherwise. Cite this article:
Mountlake Terrace, Washington Facts for Kids. Kiddle Encyclopedia.