Pocahontas County is a county located in the U.S. state of West Virginia. As of the 2010 census, the population was 8,719. Its county seat is Marlinton. The county was established in 1821. It is named after the daughter of the Powhatan chief of the Native Americans in the United States from Jamestown, Virginia. She married an English settler and their children became ancestors of many of the First Families of Virginia.

Pocahontas County is the home to the Green Bank Observatory and is part of the National Radio Quiet Zone.

When Andrew Lewis, early American pioneer, soldier, surveyor, and soldier from Virginia, came to survey one of the land grants for the Greenbrier Company in 1751, he found Jacob Marlin and Stephen Sewell living where Marlinton is found today. They had come from Frederick, Maryland, in 1749 and are considered the first settlers west of the Alleghenies. They built their original cabin where Marlin Run met Knapp’s Creek but Lewis found Sewell living in a large hollow sycamore tree near the cabin in what is now the area between Eighth and Ninth Avenues between Eighth and Ninth Streets.

The move Westward by settlers was not met well by the Indians as this was one of their many favored hunting areas. A treaty of 1758 confirmed the land west of the Allegheny Mountains to the Indians and forbidding any of his Majesty’s subjects to settle or hunt.

As the white settlers encroached onto the Indian land, there were many raids and massacres reported. After the Revolution, the Indian squabbles quieted and the settlers’ land claims were secured in an orderly manner.

In June 1863, West Virginia became the 35th state of the Union. Although part of Virginia at the time, the two areas differed culturally and pioneering individuals traditionally settled the western portion, while a slave-holding aristocratic society developed in the eastern portion. When Virginia seceded from the Union in 1861, the residents of the western counties, few of whom owned slaves, decided to stay with the Union.

The railroads came late to Pocahontas County as building rails over the mountains was not only a tedious job, but an expensive job. It was not until 1899 that construction began but after that, the task moved with startling speed. The 1900 census of the county indicates that many Europeans came to the region to build the railroads.

Commercial timbering quickly began upon completion of the railroads, including a large mill owned by the West Virginia Pulp & Paper Company (now MeadWestvaco) at Cass. By the end of 1920, dozens of small railroading towns dotted the landscape along the Chesapeake & Ohio Railway line.

The highest point is Thorny Flat on Cheat Mountain in the northwestern part of the county, elevation 4848 feet (1478 m). 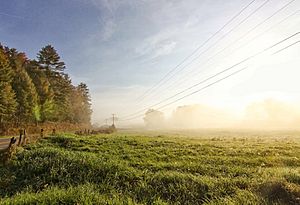 Countryside off Route 28 near Dunmore, WV

As of 2008, there were approximately 30,000 out-of-towners who own property in Pocahontas County. The tourism industry has continued to be one of the county's largest economic industries. The main tourist attraction is Snowshoe Mountain, which attracts thousands of visitors every summer and winter.

All content from Kiddle encyclopedia articles (including the article images and facts) can be freely used under Attribution-ShareAlike license, unless stated otherwise. Cite this article:
Pocahontas County, West Virginia Facts for Kids. Kiddle Encyclopedia.