Hillsboro is a town in Pocahontas County, West Virginia, United States. The population was 260 at the 2010 census.

Hillsboro was named for pioneer John (Richard) Hill, from North Carolina, who built a log cabin near what is now Lobelia. Most of the early settlers were Scots-Irish and worked in agriculture and stock raising.

In the 1800s the town of Hillsboro centered on the educational institution Little Levels Academy. Established in 1842, the school closed 18 years later at the onset of the Civil War. In 1865, the county purchased the building and ran it as a public school through the 1880s, and it became a school of higher order for boys called Hillsboro Academy. The basement of the Methodist Church served as a school of high order for girls called Hillsboro College, or Little Levels Seminary. Eventually the brick Academy was torn down and replaced by a wood frame school for both boys and girls. Later the school was re-built in brick as Hillsboro High School.

Millpoint, in northern Hillsboro, was once the site of a small industrial village, "including within its limits proper a store, a blacksmith shop, two flour mills, and three homes." One of the mills has been restored and can be seen along Rt. 219. 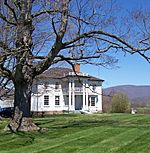 In 1892, famous author Pearl S. Buck was born in a large white two-story house at the northern end of town. Shortly thereafter, her family, Presbyterian missionaries, returned to China, but her West Virginia roots nevertheless had a significant impact on Pearl through her mother Carrie.

Hillsboro is also featured in the movie Patch Adams, where Dr. Patch Adams purchased land to build a medical clinic based on his philosophy of doctor-patient interaction. A medical clinic is planned but has not yet been constructed, as fund-raising is still underway.

According to the United States Census Bureau, the town has a total area of 0.36 square miles (0.93 km2), all of it land.

There were 120 households, of which 30.0% had children under the age of 18 living with them, 36.7% were married couples living together, 13.3% had a female householder with no husband present, 12.5% had a male householder with no wife present, and 37.5% were non-families. 31.7% of all households were made up of individuals, and 15.8% had someone living alone who was 65 years of age or older. The average household size was 2.17 and the average family size was 2.68.

All content from Kiddle encyclopedia articles (including the article images and facts) can be freely used under Attribution-ShareAlike license, unless stated otherwise. Cite this article:
Hillsboro, West Virginia Facts for Kids. Kiddle Encyclopedia.