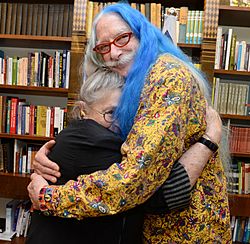 Patch Adams with Nechama Rivlin in Award Ceremony of the Danielle Prize Healing with a Heart, April 2017

Hunter Doherty "Patch" Adams (born May 28, 1945) is an American physician, social activist, clown and author. He founded the Gesundheit! Institute in 1971. Each year he organizes a group of volunteers from around the world to travel to various countries where they dress as clowns in an effort to bring humor to orphans, patients, and other people.

Adams was born on May 28, 1945 in Washington, D.C.. He was raised in Arlington, Virginia. Adams studied at Wakefield High School, at the Virginia Commonwealth University and at George Washington University.

He was married to Linda Edquist from 1975 until they divorced in 1998. They had two son, Atomic Zagnut "Zag" Adams and Lars Zig Edquist Adams. He now lives in Urbana, Illinois.

The 1998 movie Patch Adams is based on his life. He was played by Robin Williams.

All content from Kiddle encyclopedia articles (including the article images and facts) can be freely used under Attribution-ShareAlike license, unless stated otherwise. Cite this article:
Patch Adams Facts for Kids. Kiddle Encyclopedia.