Kids Encyclopedia Facts
Not to be confused with Urbana, Ohio.

Urbana is a city in and the county seat of Champaign County, Illinois, United States. The population was 41,250 at the 2010 census. Urbana is the tenth-most populous city in Illinois outside of the Chicago metropolitan area.

Most of the campus of the University of Illinois at Urbana-Champaign is located in Urbana.

The Urbana area was first settled in 1822, when it was called "Big Grove". When the county of Champaign was organized in 1833, the county seat was located on 40 acres of land tendered by Col. M. W. Busey, considered to be the city's founder, and the name "Urbana" was adopted after Urbana, Ohio, the hometown of State Senator Vance. The creation of the new town was celebrated for the first time in July 4, 1833.

Urbana suffered a setback when the Chicago branch of the Illinois Central Railroad, which had been expected to pass through town, was instead laid down two miles west, where the land was flatter. The town of West Urbana grew up around the train depot built there in 1854, and in 1861 its name was changed to Champaign. The competition between the two cities provoked Urbana to tear down the ten-year-old County Courthouse and replace it with a much larger and fancier structure, to ensure that the county seat would remain in Urbana.

Champaign-Urbana was selected as the site for a new state agricultural school, thanks to the efforts of Clark Griggs. Illinois Industrial University, which would evolve into the University of Illinois at Urbana-Champaign, opened in 1868 with 77 students.

A number of efforts to merge Urbana and Champaign have failed at the polls.

On October 9, 1871 a fire burned much of downtown Urbana. Children playing with matches started the fire. (It is unrelated to the Great Chicago Fire, though both fires occurred during severe drought and were spread by high winds.)

The Norfolk Southern operates an east to west line through Urbana. The NS line connects industries in eastern Urbana to the Norfolk Southern main line at Mansfield, Illinois, west of Champaign. The line now operated by Norfolk Southern is the former Peoria & Eastern Railway, later operated as part of the Big Four (Cleveland, Cincinnati, Chicago and St. Louis Railway), New York Central, Penn Central, and Conrail systems, being sold by Conrail to Norfolk Southern in 1996. Construction of the line was begun by the Danville, Urbana, Bloomington and Pekin Railroad. This short-lived entity became part of the Indianapolis, Bloomington and Western Railway before the railroad was completed. A branch line of the Norfolk and Western Railway (formerly the Wabash Railroad) used to connect Urbana with the main line from Danville to Decatur at Sidney, Illinois, but this was first rerouted and later closed in the early 1990s.

There were 14,327 households out of which 20.1% had children under the age of 18 living with them, 32.2% were married couples living together, 8.7% had a female householder with no husband present, and 56.6% were non-families. 36.6% of all households were made up of individuals and 8.1% had someone living alone who was 65 years of age or older. The average household size was 2.14 and the average family size was 2.83.

Market at the Square

Market at the Square

The Market at the Square, also known as the Farmers' Market, has been a community event in Urbana since 1979. Every Saturday morning from some time in May to some time in November, dozens of vendors set up shop in the Lincoln Square parking lot in downtown Urbana. They primarily sell local produce (including corn, tomatoes, lettuce and watermelons), but one can also find local crafts, music, kettle corn and booths for various community and political organizations. 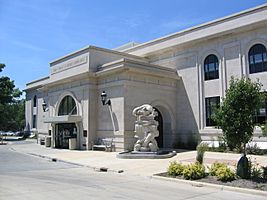 The Urbana Free Library is located in the downtown area. The library is one of the first public libraries in Illinois and was founded in 1874. The historic building which houses the library was built in 1918. A major new addition was opened in 2005.

The library is publicly funded and receives additional support from about 600 people who have joined "The Friends of the Urbana Free Library".

The Urbana Sweetcorn Festival is an annual festival in Urbana. It was first held in August 1975 in the Busey Bank parking lot in downtown Urbana. It was a community event put on by employees of Busey Bank. Since then the Sweetcorn Festival has continued to grow. The Urbana Business Association is now responsible for the planning of the festival, over the years adding a local car show, an expanded family area, live music on multiple stages, food, vendors, beer, in the heart of downtown Urbana.

In addition to corn and beverages, the festival has offered a range of activities and events, including a display of antique and other collectors' cars and volksmarches, arts events, a dog show, and a book sale organized by the Friends of the Urbana Free Library. 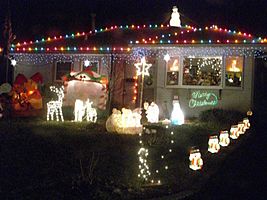 A house on Candlestick Lane colorfully decorated for Christmas

Candlestick Lane is the name for a neighborhood in eastern Urbana. This neighborhood consists of Grant Place and adjacent properties on Fairlawn and Eastern Drives. It is called Candlestick Lane because every year the residents decorate their yards for Christmas with a lot of lights and figures. The tradition began in 1961 (maybe 1960) as a house-decorating contest sponsored by the Illinois Power Company. The neighborhood used its prize money to purchase electric candlesticks for each home. The City of Urbana installs special red and green street signs, reading "Candlestick Lane" and "Grant Place" during the Holiday season. The lights are turned on from around 5:00 to 10:00 p.m. from the third Saturday in December through New Years Day.

The Urbana Lincoln Hotel is connected to Lincoln Square Mall, an indoor walking mall, in the center of Urbana. The hotel was designed by famed Urbana architect Joseph Royer in 1923 and opened several rooms on November 1, 1923, to accommodate guests for the University's Homecoming game. The original building was built in the Tudor Revival style. A convention center was added on in the 1970s in the Bavarian style. While being forced to close twice between 1990 and 2009, the hotel was purchased by a private developer in 2010 and underwent major rehabilitation. The hotel opened under new management and a new name, Urbana Landmark Hotel, on December 1, 2012, but closed in July 2015 and is listed for sale. 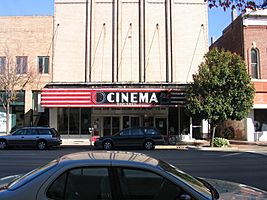 The Cinema Gallery in downtown Urbana 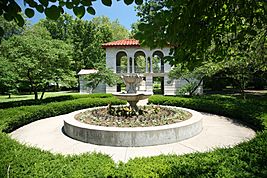 Carle Park, established in 1909, is located at Indiana and Garfield, just west of Urbana High School in Central Urbana. Measuring 8.3 acres (34,000 m2), it contains a statue entitled Lincoln the Lawyer by Lorado Taft and more than 50 well-established trees that are part of the Hickman Tree Walk. The Lincoln statue was previously sited in front of the Urbana Lincoln Hotel, but was moved after only a few months.

Meadowbrook Park is located southeast of the Race Street and Windsor Road intersection. The park covers 130 acres (0.53 km2), including 80 of recreated Illinois tallgrass prairie. Around the prairie restoration center of the park loops a wide concrete path, suitable for walking, running, and bicycling. Several small hills make the path unsuitable for inexperienced inline skaters. The path is adorned by about twenty large sculptures from local artists. A playground, shelter, and parking lot are located near the Windsor Road entrance. A community garden, an herbal garden, the Timpone Ornamental Tree Grove and a shelter are located near the Race Street entrance. The park also contains many streams which are among the first tributaries of the Embarras River. 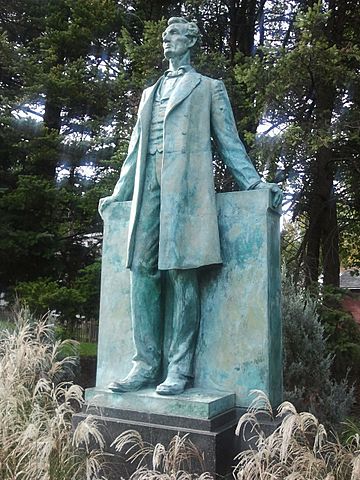 Lincoln the Lawyer by Lorado Taft

The Urbana Dog Park, located on East Perkins Road, is a place to walk one's dog without a leash.

The ART IN THE PARK, just north of the Urbana City Hall (400 S. Vine St.) dedicated October 2012, took 22 years of struggle and efforts of three mayors. The environmental and sculptural artists/curator of the park, John David Mooney designed the plantings, walkways, a 12-foot high fountain sculpture (Falling Leaf), and a 33-foot high light sculpture (Spirit Tree). The Spirit Tree specifically gives new meaning to Urbana's designation as a "Tree City" and to trees as landmarks or beacons. Mooney, an internationally acclaimed artist, is a native to Champaign-Urbana. [1]

To find about the other parks and recreational areas in Urbana, see Urbana Park District Facilities

The Urbana Indoor Aquatic Center is a public indoor pool operated by the Urbana Park District and Urbana School District. It is located between Urbana High School and Urbana Middle School.

Crystal Lake Pool is a public outdoor pool. It is located on Broadway Street, across from the Anita Purves Nature Center. It was closed after the summer 2008 season due to deteriorating conditions and concomitant safety issues, it was rebuilt and reopened in 2013.

Campus Recreation Center East (CRCE) has an indoor pool with a water slide, volleyball, basketball, and a hot tub. CRCE is owned by the University of Illinois at Urbana-Champaign.

Freer Hall and Kenney Gym both have indoor lap pools. These facilities are owned by the University of Illinois at Urbana-Champaign. The Freer Hall Pool is currently closed.

Since 2008, Urbana is a sister city with Zomba, Malawi.

The city of Urbana has been awarded a major grant from Sister Cities International to undertake a trilateral pilot project involving Urbana, Zomba, Malawi, and the Haizhu District, China. The one-year Sino-African Initiative grant is for up to $100,000 and will involve a collaborative effort to improve the municipal waste disposal system in Zomba, a city of 88,000 in southeast Africa. Urbana has had a Sister City relationship with Zomba since 2009 and is in the process of establishing such a relationship with Haizhu District, Guangzhou City, China.Urbana is one of only three cities in the United States to be awarded a Sino-African grant. The others are Denver and an Ashville/Raleigh, N.C., joint team application.

All content from Kiddle encyclopedia articles (including the article images and facts) can be freely used under Attribution-ShareAlike license, unless stated otherwise. Cite this article:
Urbana, Illinois Facts for Kids. Kiddle Encyclopedia.