State Farm Center is a large dome-shaped 15,544-seat indoor arena located in Champaign, Illinois, owned and operated by the University of Illinois at Urbana-Champaign. The arena hosts games for the Illinois Fighting Illini men's basketball and women's basketball teams. It also doubles as a performance and event center, and is one of the largest venues between Chicago and St. Louis. It opened in 1963 and was known until 2013 as Assembly Hall until State Farm Insurance acquired naming rights as part of a major renovation project.

The third largest Illinois arena after the United Center in Chicago and the Allstate Arena in Rosemont, State Farm Center has 15,544 permanent seats but, when portable chairs are placed on the floor for an in-the-round performance, there is a potential for an additional 1,000 depending on the stage configuration.

State Farm Center opened as Assembly Hall on March 2, 1963, and continues to attract attention for its design and construction. From 1963 to 1965 Assembly Hall was the largest dome structure in North America until the opening of the Astrodome in Houston, Texas. The roof is supported by 614 miles (988 km) of one-quarter inch steel wire wrapped at the base of the dome under intensive pressure. The architect was Max Abramovitz, a University of Illinois alumnus. The contractor was Felmley-Dickerson Co of Urbana, led by Ray Dickerson, who built a number of buildings for the university. 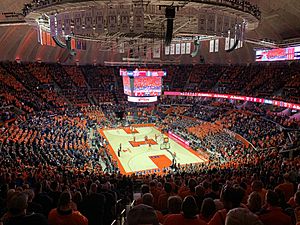 At the annual "Paint the Hall Orange" game, everyone in attendance would wear an orange shirt, resulting in an impressive and intimidating environment. In recent years, however, it has become customary for Illini fans to wear orange at all home games and so the official "PTHO" game was discontinued after the 2007-08 season.

In August 2015, prior to the reopening of the newly renovated State Farm Center, the hardwood floor was dedicated and named Lou Henson Court in honor of the Illinois Fighting Illini men's basketball all-time leader in victories Lou Henson. 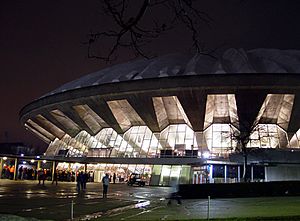 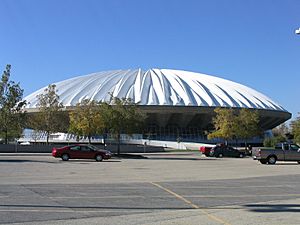 State Farm Center is also the venue for the annual WCIA 3 Broadway Series, which features popular musicals such as Les Misérables, Miss Saigon, Rent, and Fiddler on the Roof.

The largest concerts by attendance thus far are:

In the autumn of 2008, school officials, led by Athletics Director Ron Guenther, conducted a study to decide whether to refurbish the then-named Assembly Hall or build a new basketball arena. In 2010, the university opted to renovate the existing structure designed by University of Illinois alumnus Max Abramovitz, and selected the architectural firm AECOM to design the renovation. The athletic department sent surveys to I-Fund and season ticket holders to gauge demand for various premium seating options. Architects used this information to create schematic drawings and architectural renderings near the end of 2012, which then Athletics Director Mike Thomas used to aid in fundraising for the project. The anticipated renovation cost was between $150 and $160 million, and construction would not start before spring of 2014. As part of the renovations, State Farm Insurance purchased the naming rights to the arena for $60 million over 30 years.

The State Farm Center began renovations after the 2013–14 men's basketball season. Work included adding luxury suites, club/loge seating, new blue seats included in the renovation. In the luxury suites and club level seats, there will be concessions where alcoholic beverages will allowed to be served as well as a buffet area. The total budget for the renovation was estimated at $169.5 million.

The construction process did cause some conflicts with scheduled sporting events at the beginning of the 2015-16 basketball season. The men's basketball team played the first five games of the 2015 at the Prairie Capital Convention Center in Springfield, while the 2015 Women's basketball team played their first five games at Parkland College. The renovated arena hosted its first game on December 2, when the Fighting Illini fell to Notre Dame 84–79.

All content from Kiddle encyclopedia articles (including the article images and facts) can be freely used under Attribution-ShareAlike license, unless stated otherwise. Cite this article:
State Farm Center Facts for Kids. Kiddle Encyclopedia.