Huff Hall is a 4,050-seat multi-purpose arena in Champaign, Illinois, United States. The arena opened in 1925 and was known as Huff Gymnasium until the 1990s. It is named after George Huff, who was the school's athletic director from 1895 to 1935.

Huff Hall is home to the University of Illinois Fighting Illini volleyball and wrestling teams. Prior to the opening of Assembly Hall in 1963, it was home to the basketball team as well.

Currently Huff Hall is used for a variety of sporting events, including men's and women's gymnastics, men's wrestling, and women's volleyball. At each athletic event banners are hung of past Illini heroes to remind the crowd of the rich tradition that Illini athletics have had.

Every March from 1926 to 1962, Huff Gymnasium played host to the state finals of the Illinois High School Association boys' basketball tournament. 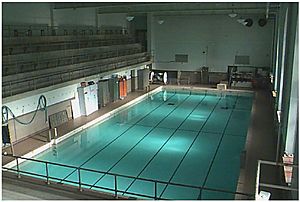 In addition to hosting athletic events, Huff Hall is also the home of the College of Applied Health Sciences. 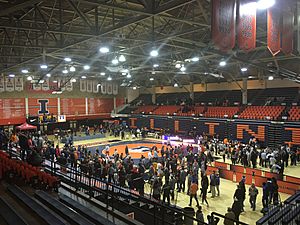 Huff Hall following the last wrestling meet of the 2019-2020 season.

Originally called the "New Gymnasium", Huff Hall was designed in the Georgian-Revival Style by Charles A. Platt and University Architect James M. White. The building's architecture matches that of the Armory, Main Library, the Union, and other campus buildings. At the conclusion of its $772,000 construction in 1925, Huff Hall replaced the Military Drill Hall (now known as Kenney Gym Annex) as the home for Fighting Illini basketball. The "New Gymnasium" was renamed Huff Gymnasium in 1937 following the longtime athletic director's passing.

All content from Kiddle encyclopedia articles (including the article images and facts) can be freely used under Attribution-ShareAlike license, unless stated otherwise. Cite this article:
Huff Hall Facts for Kids. Kiddle Encyclopedia.