Kids Encyclopedia Facts
Not to be confused with Urbana, Illinois.

Urbana is a city in and the county seat of Champaign County, Ohio, United States, 47 miles (76 km) west of Columbus. Urbana was laid out in 1805, and for a time in 1812 was the headquarters of the Northwestern army during the War of 1812. It is the burial place of the explorer and Indian fighter Simon Kenton.

Champaign County was formed on February 20, 1805 following the American Revolution and the Northwest Indian War. Colonel William Ward, a Virginian who had settled in the Mad River Valley with Simon Kenton in 1799, purchased 160 acres which he considered the logical and most acceptable site for Champaign's county seat. He approached the county commissioners with a proposition to locate the seat of the new county on this tract. Ward suggested that site to divided into 212 lots and 22 out-lots, half of which, selected alternately, were to be given to the county and while Ward would retain the remainder. Ward also offered two lots for a cemetery and a tract for the public square. The county commissioners approved the proposal, and Ward, with Joseph C. Vance, entered into a written agreement on October 11, 1805. Ward and Vance named the new county seat, Urbana.

The origin of the name 'Urbana' is unclear, however, it is thought that Ward and Vance used the Latin word 'urbs', which means city. Antrim provides the following theory: "It is said by some that Mr. Ward named the town from the word Urbanity, but I think it is quite likely he named it from an old Roman custom of dividing their people into different classes – one class, the Plebeians, and this again divided into two classes – Plebs Rustica and Plebs Urbana. The Plebs Rustica lived in the rural districts and were farmers, while the Plebs Urbana lived in villages and were mechanics and artisans." Others feel that Ward and Vance chose to name it from a town in Virginia, possibly Urbanna, but this seems unlikely. Urbanna means 'City of Anne' and was named for the English queen. It is more likely that two Revolutionary War veterans would turn to Latin rather than honor their former foe. A review in 1939 shows that of the 12 cities in the United States named "Urbana", the city in Ohio was the first.

When Ward delegated Vance to survey the site, there were no platted towns between Detroit and Springfield to use as a model. Nevertheless, Vance and Ward planned Urbana systematically. They provided for an ample public square, and laid the streets in an orderly pattern with no deviations for bogs and swamps.

By 1833, Urbana contained a courthouse and jail, one printing office, a church, a market house, nine mercantile stores, and 120 houses.

On June 21, 2009, a skatepark was added to Urbana's Melvin Miller Park. The skatepark was designed by Kevin Shockey and constructed by Yoder Concrete Construction, LLC. On November 2013, Damien Pendergast, who was a local skateboarder, died from germ cell cancer. Following his death, his high school class raised $700 and support to dedicate the skatepark in Damien's name.

There were 4,808 households of which 31.0% had children under the age of 18 living with them, 41.3% were married couples living together, 14.4% had a female householder with no husband present, 5.2% had a male householder with no wife present, and 39.0% were non-families. 33.0% of all households were made up of individuals and 14.4% had someone living alone who was 65 years of age or older. The average household size was 2.34 and the average family size was 2.95.

There were 4,859 households out of which 29.0% had children under the age of 18 living with them, 46.2% were married couples living together, 11.8% had a female householder with no husband present, and 38.3% were non-families. 33.4% of all households were made up of individuals and 13.1% had someone living alone who was 65 years of age or older. The average household size was 2.29 and the average family size was 2.92. 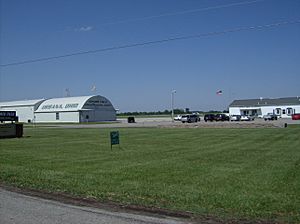 All content from Kiddle encyclopedia articles (including the article images and facts) can be freely used under Attribution-ShareAlike license, unless stated otherwise. Cite this article:
Urbana, Ohio Facts for Kids. Kiddle Encyclopedia.