The governor of Ohio is the head of government of Ohio and the commander-in-chief of the U.S. state's military forces. The officeholder has a duty to enforce state laws, the power to either approve or veto bills passed by the Ohio General Assembly, the power to convene the legislature and the power to grant pardons, except in cases of treason and impeachment.

There have been 64 governors of Ohio, serving 70 distinct terms. The longest term was held by Jim Rhodes, who was elected four times and served just under sixteen years in two non-consecutive periods of two terms each (1963–1971 and 1975–1983). The shortest terms were held by John William Brown and Nancy Hollister, who each served for only 11 days after the governors preceding them resigned in order to begin the terms to which they had been elected in the United States Senate; the shortest-serving elected governor was John M. Pattison, who died in office five months into his term. The current governor is Republican Mike DeWine, who took office on January 14, 2019. 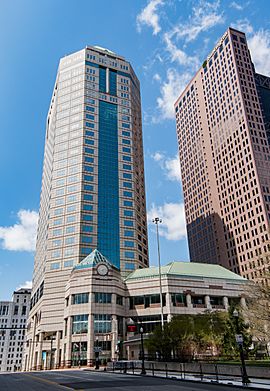 To become governor of Ohio, a candidate must be a qualified elector in the state. This means that any candidate for governor must be at least 18 years old at the time of election, a resident of Ohio for at least 30 days before the election, and a U.S. citizen. Convicted felons and those deemed by the courts as incompetent to vote are not eligible. There is a term limit of two consecutive terms as governor.

Other duties and privileges of the office include:

Main page: Gubernatorial lines of succession in the United States#Ohio

Should the office of governor become vacant due to death, resignation, or conviction of impeachment, the lieutenant governor assumes the title of governor. Should the office of lieutenant governor also become vacant, the president of the senate becomes the acting governor. If the vacancy of both offices took place during the first twenty months of the term, a special election is to be held on the next even-numbered year to elect new officers to serve out the current term. Prior to 1851, the speaker of the senate acted as governor for the term. Since 1978, the governor and lieutenant governor have been elected on the same ticket; prior to then, they could be (and often were) members of different parties.

Initially after the American Revolution, parts of the area now known as Ohio were claimed by New York, Virginia, and Connecticut; however, New York ceded its claim in 1782, Virginia in 1784, and Connecticut in 1786, though it maintained its Western Reserve in the area until 1800. On July 13, 1787, the Northwest Territory was formed. As territories were split from it, one of them eventually came to represent the area of present-day Ohio.

Throughout its 15-year history, Northwest Territory had only one governor, Arthur St. Clair. He was removed from office by President Thomas Jefferson on November 22, 1802, and no successor was named; Charles Willing Byrd, as Secretary of the Territory, acted as governor until statehood.

Governors of the State of Ohio

Ohio was admitted to the Union on March 1, 1803. Since then, it has had 64 governors, six of whom (Allen Trimble, Wilson Shannon, Rutherford B. Hayes, James M. Cox, Frank Lausche, and Jim Rhodes) served non-consecutive terms.

The first constitution of 1803 allowed governors to serve for two three-year terms, limited to six of any eight years, commencing on the first Monday in the December following an election. The current constitution of 1851 removed the term limit, and shifted the start of the term to the second Monday in January following an election. In 1908, Ohio switched from holding elections in odd-numbered years to even-numbered years, with the preceding governor (from the 1905 election) serving an extra year. A 1957 amendment lengthened the term to four years and allowed governors to only succeed themselves once, having to wait four years after their second term in a row before being allowed to run again. An Ohio Supreme Court ruling in 1973 clarified this to mean governors could theoretically serve unlimited terms, as long as they waited four years after every second term.

All content from Kiddle encyclopedia articles (including the article images and facts) can be freely used under Attribution-ShareAlike license, unless stated otherwise. Cite this article:
List of governors of Ohio Facts for Kids. Kiddle Encyclopedia.