Kids Encyclopedia Facts
"Urbanna" redirects here. It is not to be confused with Urbana.

Urbanna is a town in Middlesex County, Virginia, United States. Urbanna means “City of Anne” and was named in honor of England's Queen Anne. The population was 476 at the 2010 census. 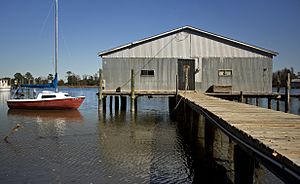 A view of Urbanna Creek

There were 266 households, out of which 20.7% had children under the age of 18 living with them, 46.6% were married couples living together, 11.7% had a female householder with no husband present, and 39.5% were non-families. 35.0% of all households were made up of individuals, and 19.5% had someone living alone who was 65 years of age or older. The average household size was 2.04 and the average family size was 2.61.

For more than 50 years, the town has hosted the Urbanna Oyster Festival. Begun in 1958, the festival is held the first weekend of November each year, from Friday morning to ending Saturday night. Live music, arts and crafts, two parades (the Fireman Parade on Friday night, and the Festival Parade on Saturday afternoon), the renowned oyster-shucking contest, and children's activities are all major attractions. A variety of foods is available from numerous vendors. Annual attendance over the two days is in between 50,000-75,000. During the festival, the town is closed to traffic in the afternoon on Friday and for most of the day Saturday. Admission to the event is free of charge, although there is a fee for parking within the vicinity of the festival.

An outdoor art and craft show, Art on the Half Shell, was started in 2001. The juried, one-day event has become quite popular and, like the Oyster Festival, is open to the public at no charge. Local and out of town artists are featured, with a great variety of artistic mediums presented.

The climate in this area is characterized by hot, humid summers and generally mild to cool winters. According to the Köppen Climate Classification system, Urbanna has a humid subtropical climate, abbreviated "Cfa" on climate maps.

All content from Kiddle encyclopedia articles (including the article images and facts) can be freely used under Attribution-ShareAlike license, unless stated otherwise. Cite this article:
Urbanna, Virginia Facts for Kids. Kiddle Encyclopedia.